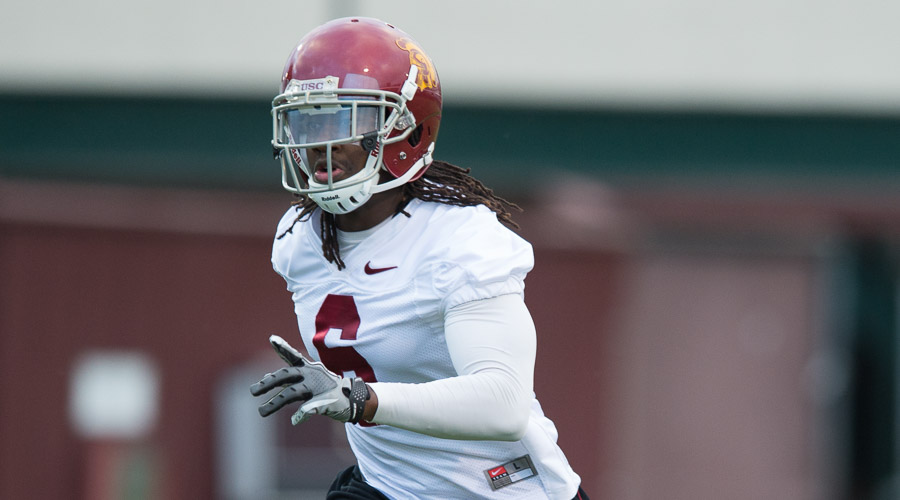 USC’s highly anticipated matchup with crosstown rival UCLA coming up on Saturday is fast approaching, but on Wednesday it was the return of Josh Shaw that had everyone’s attention on Brian Kennedy-Howard Jones Field.

The senior cornerback took part in his first practice with the Trojans since last August, when he was caught fabricating a story about how he suffered two high ankle sprains, while also becoming the subject of a domestic violence investigation stemming from the same incident.

But on Monday it was revealed that the Los Angeles district attorney had decided not to file any charges against Shaw, and that appears to have paved the way for Shaw’s reinstatement on Tuesday night, as well as for his return to the practice field on Wednesday.

Following the workout, a number of Trojan players all expressed the same sentiment – that they were extremely pleased to have the veteran performer back on the team. USC head coach Steve Sarkisian noted that everyone has moved on from the incident and that they are now hopeful that he can finish his senior season off on a positive note.

“When you’re 18-22 years old, we’re going to make some mistakes – that’s human nature,” Sarkisian said. “And what I’ve always tried to do, not just in this instance, but in all of them, is really assess the character of the individual. Was the action out of character for him? I totally believe that with Josh. I think he’s a very good person. He made a mistake. He acknowledged it. He’s been remorseful for it. He’s paid a severe penalty of 10 games, and he’s fortunate and happy to be back.”

Taking part in the entire two-hour shorts-and-helmets practice session, Shaw moved well, lining up primarily at cornerback, but also seeing some brief time at nickelback as well as on the kickoff team.

“I thought he moved pretty fluidly,” Sarkisian said. “You can tell he’s been active, he’s been doing things.”

Sarkisian said that Shaw could “potentially” play against UCLA this weekend, but that with just one practice under his belt, it’s still too early to say for certain.

“We’re going to get back in here, we’re going to look at the film, I’ll get with Justin [Wilcox] and Keith [Heyward], and see where we’re at,” Sarkisian said. “I’ll get with Coach [Johnny] Nansen and discuss where he could potentially fit special teams-wise as well after having a day of work with him on the field.”

Sarkisian also said that Shaw, who was voted a team captain before the season, no longer holds that title, and that he will not be allowed to speak with the media until USC’s bowl game workouts.

And despite the attention that Shaw’s return has generated, made evident by the mass of television cameras and reporters in attendance on Wednesday, Sarkisian does not believe that it will serve as a distraction heading into the Trojans’ clash with UCLA.

“We’ve been dealing with so much, it’s a unique character trait of our guys that they have the unique ability to minimize the distractions, focus on the task at hand and do their job,” Sarkisian said. “I just don’t think that they’re making it out to be bigger than it needs to be,” Sarkisian said. “They have a teammate that’s back on the team. They’re happy for him, they’re excited for him, and more than anything else they want to play great Saturday at 5 o’clock.”

Both rush end/outside linebacker J.R. Tavai (knee) and safety John Plattenburg (thigh bruise) participated in practice, once again, and overall, Sarkisian said that he is happy with where the team is sitting when it comes to the health of the players.

“J.R. looked good today, Plattenburg looked good today, and all of the guys that have kind of had some stiff lingering – Darreus Rogers, Soma [Vainuku], Ajene [Harris]…all of those guys have performed well,” Sarkisian said. “So, 10 games into the season I’m pleasantly pleased with where we’re at from a health standpoint.”

– Freshman tight end Bryce Dixon practiced again, but Sarkisian said that his student conduct case is still ongoing, so he still doesn’t know if he will play against UCLA. He is hoping to hear back by Thursday.

– As was noted earlier, the team was in shorts and helmets on Wednesday, so it was a lighter practice with an emphasis on game planning, with the No. 1 offensive and defensive units spending a good portion of the day going up against the scout teams. There were no 11-on-11 periods featuring the No. 1 offense against the No. 1 defense

– During the service team periods, George Farmer and Nelson Agholor each made deep receptions.
Tags: None