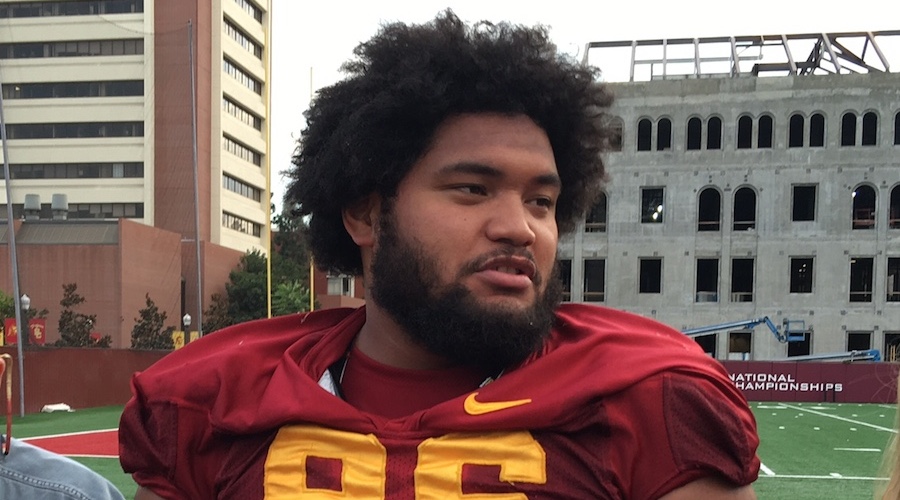 With Saturday’s matchup with Notre Dame fast approaching, the Trojans hit the practice field, once again, on Wednesday. There was a heavy emphasis, offensively, on third-down situations, not to mention plenty of special teams work with a particular focus on the return game.

Following the two-hour session much of media’s focus centered on the seniors on the team. A group that has played under four head coaches in their time at USC, and that has been instrumental in the team’s dramatic turnaround this season, they’re set to play in the Coliseum for the last time in a Trojans uniform this weekend.

“They’ve done a terrific job through the high times and the lows, and they’ve stayed even-keeled, and now they have a chance to do something really special down the stretch here,” Helton said. “They have the opportunity to go through November undefeated, October undefeated, the ability to bring the Victory Bell and the Shillelagh possibly home, and the ability to possibly go undefeated in the Coliseum in their senior year. It speaks volumes about the type of men they are, and they’re guys that we have a lot of respect for, and they’ve carried us through this year, most definitely.”

And while each and every member of that senior class is sure to be filled with emotion as they walk down the Coliseum tunnel for the final time on Saturday, as senior captain Michael Hutchings noted, the focus will be to continue what they’ve started.

“Right now we’re enjoying what we’re doing right now as a team,” Hutchings said. “We’ve really created something special over the last few weeks, and we really want to finish that out strong.”

Tu’ikolovatu hoping to get some help from former Utah teammates

While defensive tackle Stevie Tu’ikolovatu has only been at USC for one season, as a graduate transfer, he’s included in that group of seniors who will be playing in their final game in the Coliseum in a USC uniform on Saturday.

He’ll also be facing Notre Dame for the first time.

“I’m just excited to play against Notre Dame,” Tu’ikolovatu said. “I’ve never played against them before, but they have a good reputation of having good offensive linemen, so I’m excited for the challenge.”

Having transferred to USC from Utah prior to the start of the season, he’s remained in close contact with many of his former teammates in Salt Lake City throughout the fall. And with USC needing a Utah victory over Colorado this Saturday in order for the Trojans to land in the Pac-12 Championship Game, those current Utes players had a special message for Tu’ikolovatu when they spoke recently.

“I talked to them Sunday after the game, and they said they’re going to take care of Colorado for us, but they said, ‘ if we take care of them, you owe us.’” Tu’ikolovatu said. “I think they’ll do a good job against Colorado and get us in the position we need to be in, and everybody here in L.A. will be happy.”

Before Saturday, however, there’s Thanksgiving on Thursday – a big day for the 6-foot-1, 320-pound Tu’ikolavatu.

“My family comes in tonight, so I don’t know what the plans are,” Tu’ikolovatu said. “I’m trying not to eat a lot so I can keep my weight down, but I told Coach [Kenechi Udeze] that I can’t make any promises, because when my mom comes in, it’s time to eat.”

– The Trojans practiced in shorts, shoulder pads and helmets on Wednesday.

– Helton said that the team practiced with a wet ball at one point in anticipation of potential rain on Saturday.

– Wide receiver JuJu Smith-Schuster (hip/shoulder/wrist) was again limited, but he got more work in than he did on Tuesday, even taking some brief reps during one of the 11-on-11 team periods.

– Tu’ikolovatu (knee) was again limited, but more in an effort to preserve him for Saturday than anything else, with Helton noting afterwards that he looked good during the session. Jacob Daniel continued to fill his spot with the No. 1 group during most of the 11-on-11 periods.

– Defensive tackle Josh Fatu (ankle) was limited, but he continued to show signs of progress, even taking some brief reps with the No. 1 defense during the final 11-on-11 period of the day.

– Predator outside linebacker Porter Gustin (ankle) also appeared to be limited again, although that looks to be more as a precautionary measure than anything else. He was moving well when he was in there. Olajuwon Tucker again lined with the No. 1 defense in his place during most of the 11-on-11 periods.

– Cornerback/Wide Receiver Adoree’ Jackson participated in the entire practice session for the second consecutive day, and he does not appear to be hampered by the ankle injury that he suffered against UCLA in any way.

– Cornerback Jonathan Lockett (hip) suited up, but he appeared to be limited.

– Cornerback Jack Jones came up with an interception in the first 11-on-11 period of the day. He picked off a Max Browne pass intended for Josh Imatorbhebhe.

– Cornerback Jalen Jones intercepted a Sam Darnold pass intended for Smith-Schuster. There appeared to be some confusion between Darnold and Smith-Schuster on the play.

– Wide receiver Michael Pittman Jr. had the catch of the day, leaping up high to snag a deep pass down the seam from Darnold over Jalen Jones.

– MIKE linebacker Cameron Smith came up with the hit of the day, drilling freshman receiver Tyler Vaughns after he caught a quick pass over the middle.

– Darnold hit Justin Davis outside for a gain of close to 10 yards.

– Darnold hit Darreus Rogers outside for a gain of around 15 yards.

– Browne tried to hit Vaughns over the middle, but Jalen Jones got a hand up and broke up the pass.

– Darnold scrambled for some time and hit De’Quan Hampton outside for a gain of 12 or 13 yards.

– Darnold hit Rogers outside for a gain of 15 yards.

-Darnold hit Hampton for a deep touchdown down the seam.

– Darnold hit Tyler Petite outside for a gain of close to 10 yards.

– Darnold hit Adoree’ Jackson outside for a gain of around 10 yards.

– Darnold hit Daniel Imatorbhebhe outside for a gain of 10 yards.

– Browne hit Vaughns over the middle for a gain of over 10 yards.

– Browne tried to go deep to Vaughns, but Iman Marshall was in tight coverage and the ball fell incomplete.

– Browne hit Vaughns over the middle for a gain of close to 15 yards.

– Darnold hit Rogers over the middle for a long touchdown.

– Darnold hit Jalen Greene over the middle or a gain of 15 yards.

– Darnold hit Petite over the middle for a gain of 15 yards.

– Browne hit Josh Imatorbhebhe for a gain of around 10 yards.