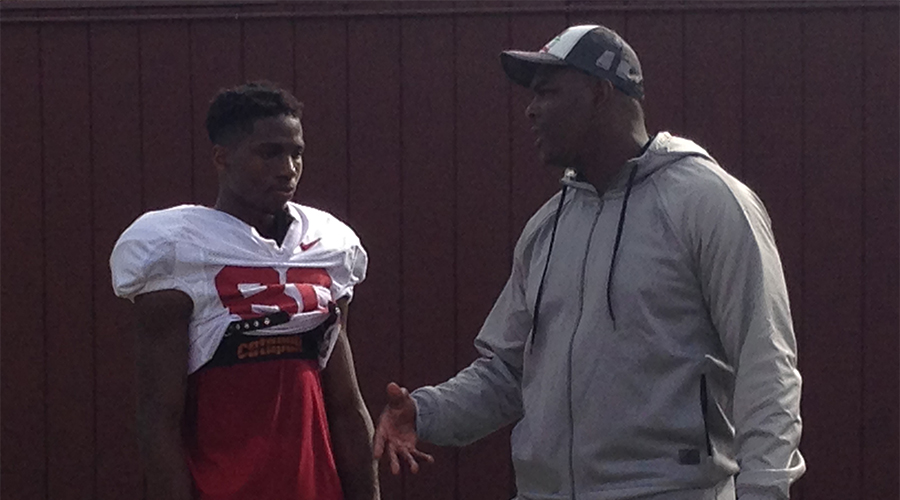 Former USC wide receiver and NFL standout Keyshawn Johnson was on hand on Wednesday morning as the Trojans took part in another spirited practice session under Interim Head Coach Clay Helton. With a Cal team featuring the nation’s No. 10 ranked passing attack (346.7 yards per game) coming up on Saturday, Helton said that there was a special emphasis placed on two specific areas – 1) defensive pass-rush, and 2) third-down situations on both sides of the ball.

“I thought the kids did a great job for the second day of the week in preparing,” Helton said. “It was a really important day for us today. A huge point of emphasis in this game will be the pass-rush that we put on Jared Goff, and third-down situations, both offensively and defensively. I think it’s going to be critical in this game to keep the ball away from a really, really good offense in Cal, and to get pressure on a really good quarterback.”

In a sign of that emphasis, Helton spent significant time working with both the offensive and defensive lines during an early drill when the two groups went head-to-head. Known more for his work with quarterbacks and as an offensive coordinator, Helton noted that as the son of a former offensive line coach in Kim Helton, he also has plenty of knowledge when it comes to line play.

“Being an offensive coordinator, and being an offensive line coach’s son, you pick things up,” Helton said. “I just want them to feel the intensity and passion I have for that group, because for us to win a championship, it’s going to be won in the trenches. It was last week. That’s our belief here. I think the head coach has to be around those guys and they have to feel your passion for them, and every little thing that I can pass on to a defensive lineman, you know, maybe a technique that an offensive lineman doesn’t like to see, I’m going to try to give them every little piece of information I can.”

– The Trojans practiced in shorts, shoulder pads and helmets.

– Wide receiver Darreus Rogers (hamstring) took part in the entire practice session. During one 11-on-11 period he made a really nice leaping catch over the middle and then raced off for a 35-yard touchdown.

– Wide receiver Steve Mitchell Jr. (ankle) was suited up and spent a good portion of practice working with a trainer on the sideline, but remained extremely limited.

– Tight end Tyler Petite (foot) was suited up but did not participate in practice. Taylor McNamara (shoulder) wore a yellow jersey and was withheld from contact, but he did participate in a good portion of practice and appeared to be running and moving well. Connor Spears took most of the reps with the No. 1 offense at tight end during the team 11-on-11 periods.

– Tailback Tre Madden (knee) took part in a larger portion of practice than he has at any other time in recent weeks. He even participated in a late 11-on-11 period and broke off an impressive 20-yard-plus gain where he bounced outside and found daylight.

– Linebacker John Houston Jr. did not participate in practice.

– Adoree’ Jackson lined up on defense at cornerback for almost the entire day for the second consecutive practice. He did take some reps on offense during a late 11-on-11 period.

– Wide receiver JuJu Smith-Schuster appeared to be a little hobbled at times throughout practice, perhaps a sign of a reported leg injury that he’s been dealing with, but he continued on and made it through the entire practice session.

– Khaliel Rodgers again spent the entire day with the No. 1 offense at center, with Viane Talamaivao at RG, Zach Banner at RT, Chad Wheeler at LT and Damien Mama at LG.

– The No. 2 offensive line group was comprised of Jordan Austin at LT, Chris Brown at LG, Nico Falah at C, Cole Smith at RG and Chuma Edoga at RT.

– In addition to Johnson, among those in attendance included scouts from the New England Patriots and Tampa Bay Buccaneers of the NFL, as well as the Ottawa Redblacks of the CFL.

– Justin Davis ran outside for a gain of around five yards before Chris Hawkins made the stop.

– Cody Kessler hit Jalen Greene over the middle for a gain of 10 yards.

– Kessler tried to hit Spears over the middle, but Leon McQuay III was there to break it up.

– Kessler connected with Deontay Burnett outside for a gain of close to 20 yards before McQuay made the stop.

– Kessler hit Burnett for a gain of close to 25 yards before Su’a Cravens made the stop.

– Kessler hit Spears outside for a 10-yard gain.

– Kessler went deep to Smith-Schuster in the end zone, but Jonathan Lockett was there to break up the pass.

– Kessler hit Dominic Davis with a quick pass over the middle, with Davis bouncing outside and showing off his speed on his way to a gain of around 20 yards before McQuay made the stop.

– Kessler connected with Greene outside for a gain of 10 yards.

– Kessler tried to hit Aca’Cedric Ware over the middle, but Osa Masina was in coverage and deflected the pass.

– Kessler hit De’Quan Hampton for a gain of 25 yards over the middle before Kevon Seymour made the stop.

– Kessler hit Smith-Schuster over the middle for a gain of 12 or 13 yards before Hawkins made the stop.

– Kessler hit D. Davis with another quick pass, and then he darted off for a gain of close to 20 yards.

– Max Browne connected with George Katrib outside for a 10-yard gain.

– Browne threw outside to David Mellstrom, but Iman Marshall picked off the pass.

– Kessler hit Adoree; Jackson outside for a short gain.

– Browne hit Caleb Wilson outside for a gain of around 10 yards.

– Browne tried to hit Katrib, but Seymour broke up the pass.