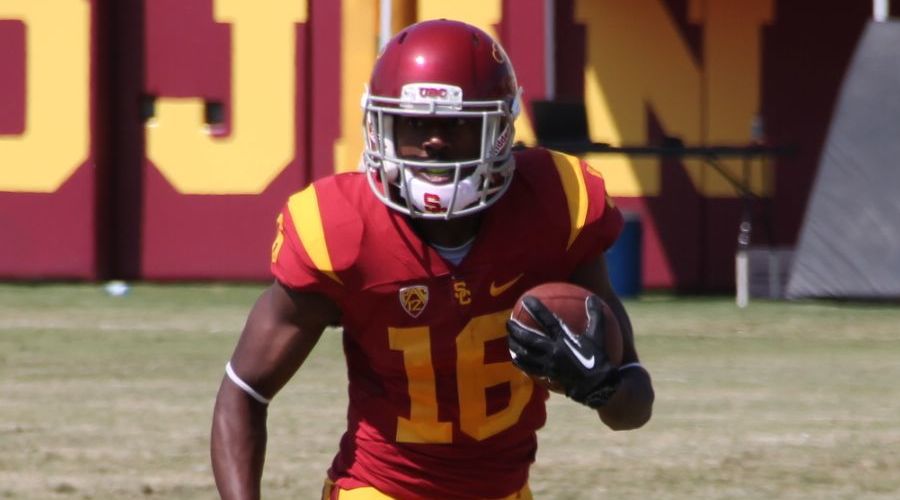 The Trojans were back at work on Wednesday, taking part in a shorts-and-shoulder pads practice on Brian Kennedy-Howard Jones Field in preparation for Saturday’s contest at home against No. 3 Utah.

With the Utes currently sporting a turnover margin of plus-2 per game, the No. 2 mark in the nation, Clay Helton has stressed to his team throughout this week the importance of taking care of the ball, as well as in getting takeaways, and he was pleased with the result on Wednesday, particularly on the defensive side of the ball.

“Great Turnover Wednesday,” Helton said. “Really, in my opinion, two terrific practices by our defense – back-to-back. Two very spirited practices. And we stressed the importance today of turnovers in this game. We’re playing an extremely good team when it comes to turnover margin. They’ve taken 19 turnovers away. They’re plus-12 on the year, which is an unbelievable number. Their quarterback is doing a great job of protecting the ball with only four interceptions, and their defense is doing a terrific job of getting the ball. So, I think it’s going to be an unbelievable key in the game, and something that we really stressed today.”

Other keys to the game that Helton brought up included USC’s ability to rush the ball offensively, as well as in the Trojans’ ability to stop the run on defense – a tall task considering Utah’s running back, Devontae Booker, is one of the nation’s most prolific ball carriers, averaging 130.5 yards per game – No. 10 in the nation.

“The most physical runner, probably, in our conference,” Helton said. “Roger Craig is who he reminds me of. The leg drive on contact is incredible. He is just a very, very hard man to bring down. You may make contact at three and he’s carrying you to seven. And instead of 2nd-and-7 it’s 2nd-and-3, and that’s a different ball game. So, we’ve got to do a great job at the line of scrimmage. The O-line and the D-line are going to win this game. It’s going to be a game in the trenches.”

– Chad Wheeler was sidelined for the second consecutive day with concussion-like symptoms. In his absence Zach Banner continued to line up with the No. 1 group at left tackle, with freshman Chuma Edoga taking reps at right tackle.

– Wide receivers Steven Mitchell Jr. (ankle) and Darreus Rogers (hamstring) did not participate in practice, with Helton noting afterwards that both are “50-50 at best” to play on Saturday.

“He looks like he’s going to be able to go,” Helton said.

– Tight end Taylor McNamara returned to full-time duty on Wednesday, but safety John Plattenburg and linebacker Michael Hutchings continued to be sidelined with a stomach bug.

– Helton said that defensive lineman Claude Pelon (knee) is out.

– Defensive lineman Delvon Simmons went to the sideline near the end of practice, but Helton said that he just tweaked his knee, and that he was held out of the later drills as a preventative measure more than anything.

– For the second consecutive day practice got chippy at times, with Green and tailback James Toland IV getting into a scuffle at one point.

– Adoree’ Jackson continued to spend the majority of his time on offense, although he did get more reps in at cornerback than he did on Tuesday. In his place, Kevon Seymour spent the vast majority of the day at the starting cornerback spot opposite Iman Marshall.

– Dominic Davis spent much of the day with the wide receivers.

– Freshman Cole Smith spent the day with the No. 2 offense at center, with Khaliel Rodgers sliding over to right guard.

– The defensive front did a solid job of pressuring Cody Kessler, particularly early on, with the senior passer throwing three consecutive incomplete passes to start the day in the first 11-on-11 period.

– The arguable play of the day came on a Max Browne pass over the middle to D. Davis that was tipped in the air by Jackson (at cornerback) and then hauled in by Marshall for the interception.

– Among those in attendance were Oakland Raiders General Manager Reggie McKenzie, as well as scouts from the Arizona Cardinals, Jacksonville Jaguars and San Diego Chargers.

– Kessler hit Robby Kolanz outside for a gain of 7 or 8 yards before Seymour made the stop.

– Kessler hit Jackson outside for a gain of close to 10 yards before Jonathan Lockett made the stop.

– Aca’Cedric Ware ran outside for a gain of 8 or 9 yards before Isaiah Langley made the stop.

– Browne tried to hit George Katrib outside, but Langley was there to break up the pass.

– Browne went deep to Katrib, but Langley broke up the pass again.

– Uchenna Nwosu and Co. stopped Toland for a loss.

– Browne hit Kolanz outside for close to 10 yards before Jackson made the stop.

– Browne went deep over the middle to Connor Spears, but Nwosu tipped the pass and Marvell Tell just missed an interception.

– Kessler hit David Mellstrom for a 20-yard gain along the sideline.

– Browne connected with Jackson outside for a gain of 8 or 9 yards.

– Browne hit D. Davis, and he weaved his way for a gain of close to 10 yards before he was leveled by a trailing Kenny Bigelow.

– Kessler tried to hit Jackson over the middle, but Nwosu broke up the play, putting a big hit on Jackson.

– Kessler hit Jackson over the middle for a gain of around 15 yards.

– Kessler hit Deontay Burnett over the middle for a gain of 25 yards.

– Kessler hit De’Quan Hampton outside for a gain of 20-plus yard with Langley in coverage.

– Kessler hit Hampton over the middle for a gain of 20 yards.

– Browne connected with Caleb Wilson over the middle for a gain of close to 10 yards.

– Browne hit Greene over the middle for a gain of over 25 yards before Tell made the stop.

– Kessler hit D. Davis outside for a gain of 15 yards.

– Kessler connected with McNamara over the middle for a gain of 12 yards before Joel Foy made the stop.

– Kessler hit JuJu Smith-Schuster outside for a gain of around 9 yards when he fumbled the ball out-of-bounds.

– Kessler hit Justin Davis for a gain of close to 10 yards.

– Sam Darnold hit D. Davis outside for a gain of 20 yards.

– Kessler connected with Tyler Petite for a gain of close to 25 yards.