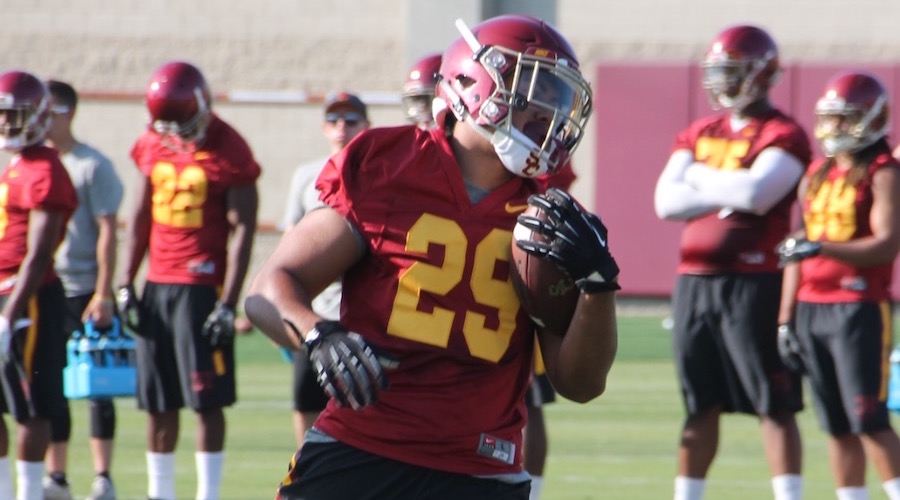 With USC smack dab in the middle of a bye week, it was another light practice for the Trojans on Wednesday, with the team taking part in a shorts, shoulder pads, and helmets workout that last just over an hour.

Once again, the highlight of the abbreviated session was the team 11-on-11 period that closed out the day. Featuring the less experienced players on the team, it was highlighted by another solid performance by freshman tailback Vavae Malepeai, who came up with one eye-catching play in particular, where he took a handoff and ran right, before leaving Liam Jimmons grasping for air with a fantastic juke, and then reversing field for a pickup of five or six yards.

Others who showed well during the period included Matt Fink, who had a few nice completions, Ykili Ross and Oluwole Betiku, both of whom combined for a sack on Fink, and Connor Murphy, who made a solid stop on Malepeai for no gain at one point.

Trojans gearing up for Cal

With the Trojans set to host Cal in the Coliseum next Thursday, practice on Wednesday wasn’t just about those younger players. After getting their first and second-down game plan in on Tuesday, USC head coach Clay Helton noted that the team was able to install their third-down game plan on Wednesday.

The bye-week has also given the defense some extra time to prepare for the Golden Bears’ prolific offensive attack, led by quarterback Davis Webb, who ranks No. 3 in the nation in both passing yards per game (376) as well as passing touchdowns (22).

“He can make any throw on the field I believe,” said USC safety Chris Hawkins. “He’s a really good QB, and he’s going to try to shred us, so we’re going to need to be on our 10 toes every play.”

– Looking to give Brian Kennedy-Howard Jones Field a break following the recent rain, the team again practiced on Cromwell Field.

– JuJu Smith-Schuster (back) was again suited up, but held out as a precautionary measure. He is expected to make a full return on Saturday.

– Cameron Smith came up with the hit of the day during a 7-on-7 period, leveling Trevon Sidney as the freshman receiver unsuccessfully tried to haul in a short pass over the middle from Max Browne.

– In the service team period, which featured the No. 1 offense and No. 1 defense against the scout teams, nose tackle Stevie Tu’ikolovatu appeared to be taking the vast majority of snaps with the first team ahead of Josh Fatu. Last week Fatu ran with the No. 1 unit throughout a majority of the workouts, before making his first start against Arizona.

– Running with the service team, Murphy did a nice job on one play, leaping high to bat down a Sam Darnold pass at the line.

– On a rep with the No. 1 offense against the service team defense, Dominic Davis ran up the middle and broke loose for a long gain.

– Fink stayed late after practice and threw to a number of reserve wide receivers.

– When asked to to discuss the biggest difference between how the defense has performed over the last month compared to the first three games, Helton said that it’s been the unit’s ability to pressure the quarterback. He added that it’s come as a result of 1) the fact that they are doing a better job with the four-man rush up front, and 2) the pressures that Clancy Pendergast has ‘dialed up.’

– The team will not practice on Thursday and Friday, using the time instead to focus on academics. The Trojans coaches, meanwhile, will be on the road recruiting. The entire team will get back to work on Saturday, which, with the team set to play on Thursday, will essentially be a Monday for them.

Highlights from the final 11-on-11 period

– Murphy stopped Malepeai for no gain.

– Fink took off and ran but only gained a couple yards before John Plattenburg made the stop.

– Fink hit Tyler Vaughns outside for a gain of 6 or 7 yards before Keyshawn Young made the stop.

– Fink hit Velus Jones outside for a gain of close to 10 yards.

– Fink hit Vaughns outside for a gain of 10 yards.

– Fink hit Michael Pittman outside for 5 or 6 yards.

– Ross and Betiku combined for a sack on Fink.

– Malepeai ran right before putting a juke on Jimmons, and then reversing field and picking up 5 or 6 yards.

– Malepeai picked up a few yards before Ross made the stop.

– Fink tried to hit Pittman deep, but Isaiah Langley was in coverage and the ball fell incomplete.