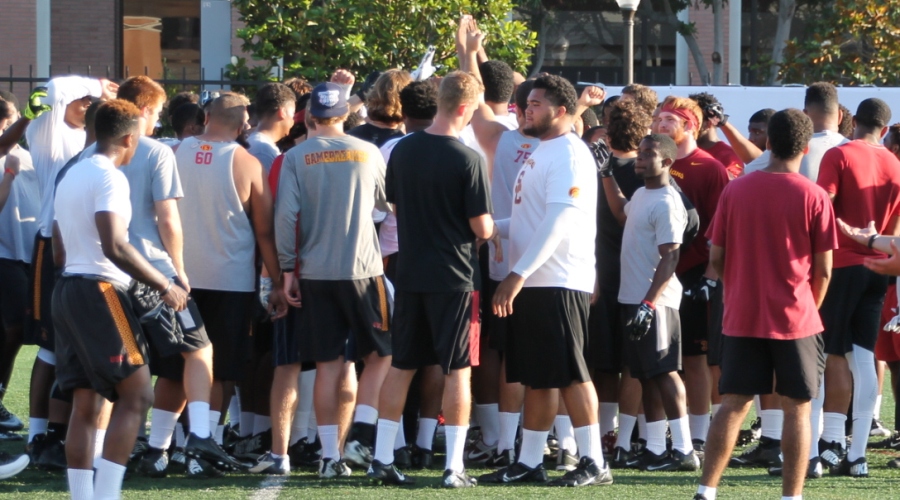 – Following a tough conditioning workout, the Trojans took part in their first early-morning volunteer throwing session of the summer on Tuesday on Brian Kennedy Field. With a number of players leaving immediately for class or to get worked on by the trainers, there weren’t quite as many participants for the players-only practice as there was in June, but there still looked to be well over 50 players on hand.

– There was one notable new face taking part in the volunteer workout in freshman cornerback Isaiah Langley, and he had a very solid showing in his first day of action. He made a nice stop on a quick pass outside to Deontay Burnett early, and then capped his practice off with an interception in the end zone on a deep Sam Darnold pass intended for George Katrib.

– Cody Kessler was not in attendance, so in addition to Darnold, others who took reps at quarterback included Max Browne, Ricky Town and Michael Bowman.

– Neither Jalen Cope-Fitzpatrick, Cyrus Hobbi or Taylor McNamara were on hand, so Connor Spears, Tyler Petite and Caleb Wilson all split time at tight end.

– JuJu Smith and Steven Mitchell continued to shine, both hauling in a number of passes.

– Freshman John Houston Jr. had a productive day at SAM linebacker, breaking up a Michael Bowman pass outside at one point.

– Chris Hawkins and John Plattenburg also came up with nice pass breakups on the day.

– Senior fullback Soma Vainuku did not take part in the volunteer workout, but he was spotted exiting Howard Jones Field following the early-morning conditioning drills.

Tuesday marked the first day that the media was allowed to speak with the players this summer, and I caught up with Jordan Simmons. After spending his first three years on campus on the offensive line, the redshirt junior has been spending his time this summer at nose tackle and defensive end.

“It was a mutual decision between the coaching staff and myself,” said Simmons, who confirmed that he will be lining up exclusively on the defensive side of the ball during fall camp. “I’m looking forward to seeing where it takes me.”

Having last seen time on the defensive line during his senior season at Encino (Calif.) Crespi in 2011, Simmons admitted that he’s still getting acclimated to the new responsibilities associated with the position on the college level, but that players like Antwaun Woods and Delvon Simmons are easing the transition.

Simmons noted that he is in the best shape since he suffered a serious knee injury in 2013, but that he still isn’t quite where he wants to be in terms of his weight.