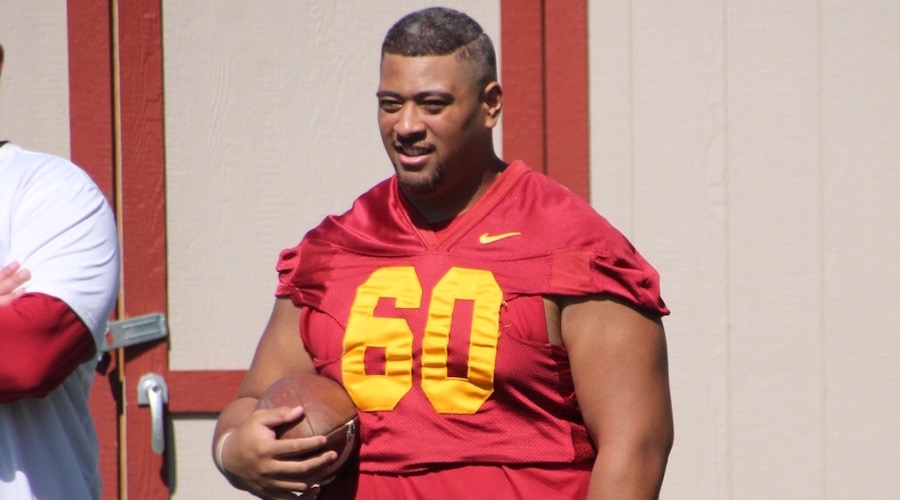 The Trojans were back on Brian Kennedy-Howard Jones Field on Tuesday, taking part in spring practice No. 10. With the team dressed in shorts, shoulder pads and helmets, there was a heavy emphasis placed not only on preparing the defense for the up-tempo offenses that they’ll face in the fall, but there was also a lengthy ‘backed-up’ period in which the defense attempted to stifle the offense as they tried to work their way up the field from near their own goal line.

“it was extremely valuable to us – when I go back and watch tape from last year – situationally, how important our backed-up defense was last year,” said USC head coach Clay Helton.  “I think of that Notre Dame game, and it being 10-6, and getting that ball spotted on the minus-seven for Notre Dame’s offense, and getting a three-and-out, punting it to Adoree’ Jackson, and then all of a sudden you look up and it’s 17-6 after that punt return.”

Continuing the trend of the spring, the defense got the better of the offense during much of the period, thanks to a strong showing by Uchenna Nwosu and Cameron Smith among others.

It was apparent that the offense sorely missed a number of key offensive linemen that are currently sidelined, and following practice Helton revealed that the newest addition to that injury list, Viane Talamaivao, underwent surgery on Tuesday for a partially torn biceps that he suffered last week. He will be out for the remainder of the spring.

Toa Lobendahn, who has started at center, guard and tackle in his career, is already sidelined for the spring as he recovers from a torn ACL, and Nico Falah, who started 12 games at center last season, is limited due to a herniated disk in his back.

“If you think about it those are three key members of our line for next year with Nico, with Toa and Viane.” Helton said. “I look forward to getting them back for hopefully 29 practices during [fall] camp. And the summer workouts, the PRP’s, will be invaluable for our guys to be able to get work.”

The one positive that has come with the current situation, according to Helton, is that the absence of Lobendahn, Falah and Talamaivao has made it possible for some of the younger players on the team to gain valuable reps with the No. 1 offense. On Tuesday the Trojans featured a starting offensive line that included Chuma Edoga at left tackle, Roy Hemsley at left guard, Cole Smith at center, Andrew Vorhees at right guard and Chris Brown at right tackle.

Looking at Falah, in particular, Helton noted that there is a possibility that the redshirt senior could make the move back to tackle – where he lined up during his first two-and-a-half years on campus – in an effort to alleviate the stress on his back that comes with playing center.

“You play at center and you’re blocking Stevie Tu’ikolovatu at 320 pounds,” Helton said. “That’s a pretty big load on the back compared to the tackle position.”

– The Trojans also went to a nickel alignment at times that saw Ajene Harris come in at the Nickelback spot, with Gustin going to the sideline. Houston moved to OLB at times in this set.

– Marlon Tuipulotu also saw time with the No. 1 group at nose.

– Jack Jones made the arguable play of the day, picking off a quick pass outside by Darnold that was intended for Tyler Vaughns, before taking it back for six.

– Vaughns also enjoyed a strong day, making a beautiful diving grab along the sideline during a one-on-one period with Isaiah Langley in coverage. He also made a deep grab over Yoofi Quansah during that same period.

– Pittman also had a big day, making a leaping grab for a big gain during the final ‘backed-up’ period.

– Darnold connected with Deontay Burnett in the first 11-on-11 period of the day for a 60-yard touchdown.

– Placekicker Michael Brown had a fantastic day. He started things off by showing off a booming leg in an early kickoff period – with Helton noting that his shortest kick was two yards deep into the end zone. He also went 8-for-8 during a field goal period, with a long of 47 yards.

– Among those in attendance was Class of 2018 center Justin Dedich (Temecula, Calif./Chaparral).

– Jones II ran behind Vorhees and Brown for a gain of 6 or 7 yards.

– Darnold hit Cary Angeline outside for a gain of close to 20 yards.

– Darnold hit Jalen Greene over the middle for a gain of 20 yards.

– Darnold tried to hit Vaughns outside, but J. Jones came up with the pick-six.

– Tuipulotu and Co. stopped Toland for no gain.

– Nwosu narrowly missed out on a safety as Malepeai slithered for a short gain.

– Darnold hit Burnett over the middle for a gain of around 15 yards.

– Nwosu stopped Malepeai for no gain.

– Fink hit Pittman who made a leaping grab along the sideline over Langley for a big gain.

– Smith stopped Toland for no gain.

– Darnold hit Burnett outside for a gain of 10 yards.

– Tuipulotu appeared to have D. Davis in his grasp for a safety, but the speedy tailback squirmed away and picked up a couple yards.