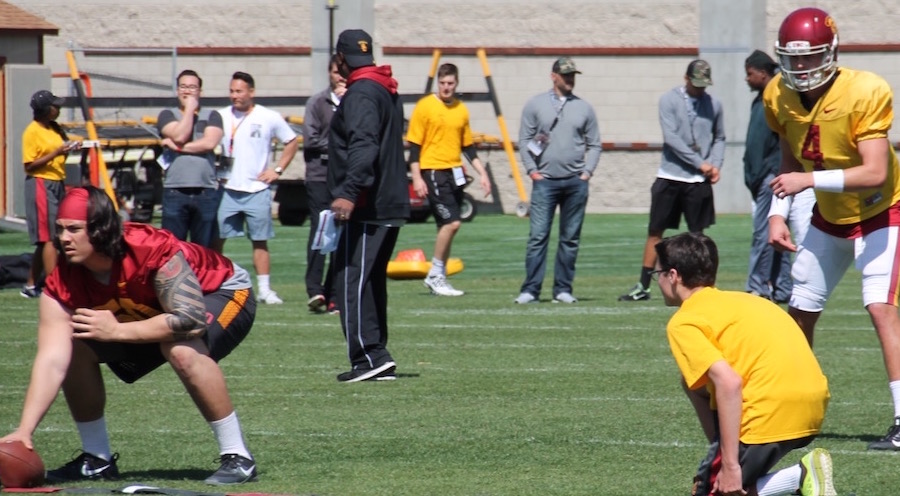 After a week away, the Trojans returned to Brian Kennedy-Howard Jones Field on Tuesday afternoon, taking part in spring practice No. 4.

“It was great to be back after a week off for spring break,” said USC head coach Clay Helton. “This is actually my favorite time of spring ball. After you get back from spring break, you’ve had three practices, you’ve got most of the base-install in, and this is the time where you win championships.”

With the team wearing shorts, shoulder pads, and helmets, it was a physical workout that was highlighted by another dramatic ending in the final five-play challenge. For the third time in four practices this spring, Max Browne came through on the final play, this time connecting with Ajene Harris for a 15-yard touchdown pass in the corner of the end zone.

Browne continued to take the bulk of the reps with the No. 1 offense throughout the day, although the competition between himself, Sam Darnold, Jalen Greene and Matt Fink is still far from over.

“They’re about where they were in the first three practices,” Helton said after practice. “You see a guy that’s in his fourth spring in Max Browne, doing a nice job, and really showing tremendous poise. Then you’ve got three younger guys that are trying to catch up as hard as they can.”

Helton is looking forward to the team’s practice in the Coliseum coming up on Saturday, when he’ll get an opportunity to watch how the four candidates perform in situations that more closely resemble what they’d face in an actual game.

“There will be a lot of situational [periods], bullets flying, live pads, so you’ll really get to see who moves the ball well, and that’s the thing I’m really looking forward to from the quarterbacks – who is productive, who moves the ball and who puts points on the board.”

A pair of coaching veterans on hand

A member of the USC coaching staff during the last half of the 2013 season under Ed Orgeron, Pete Jenkins was back at practice on Tuesday, keeping a close eye on the Trojans defensive front.

Though not a member of the Trojans full-time coaching staff, the 74-year old defensive line guru has actually been hired on by Helton for the spring to pass some of his knowledge on to Defensive Line Coach Kenechi Udeze, as well as the other USC assistants.

“It’s always good to have some senior knowledge out there to watch your coaches, and see what they’re doing,” Helton said. “Obviously, he can’t coach our kids, but he’s looking at the drill work KU [Kenechi Udeze] does, and giving our coaches knowledge and evaluating our coaches and helping them out. You’re talking about one of the best d-line coaches in the country.”

And Jenkins wasn’t the only coaching veteran in attendance on Tuesday. Helton’s father, Kim, a highly regarded offensive line coach who last served as the offensive coordinator at the University of Alabama at Birmingham in 2011, also took in the two-and-a-half hour session, and the USC head coach said that he would certainly keep an open ear to any advice that he could provide as well.

“It was nice to have dad out here today, one of the better o-line coaches I’ve ever been around,” Helton said. “I’ve always thought that there are some really experienced coaches out there that have a wealth of knowledge, and as a coach you’re always trying to get better, so the knowledge you get from a Kim Helton, a Pete Jenkins, a John Robinson when he walks in my office, and you get that kind of knowledge, you better listen, you better learn because everything you’ve dreamed about doing, they’ve done two or three times.”

– Defensive lineman Noah Jefferson did not participate in practice due to an injured back. Jefferson will undergo an MRI on Wednesday, but Helton is hopeful that he will return to action by next week. Jefferson lined up with the No. 1 defense at nose tackle throughout the first week of spring drills. In his absence, Jacob Daniel took reps there.

– Michael Pittman wore a yellow jersey and participated in individual drills only. The early-entrant freshman receiver originally broke his collar bone back in early January during U.S. Army All-American Bowl practices. He participated in the first week of spring ball at USC, but came out sore, so he is limited for the time-being as a precautionary measure according to Helton.

– Osa Masina (hamstring) worked out with a trainer on the side during practice.

– John Plattenburg appeared to be limited, and Ykili Ross also went to the sideline late in practice and was at the trainers’ table. With Leon McQuay III absent due to class, Marvel Tell, Matt Lopes, Deion Hart and Jonathan LaBonty all rotated at the two safety spots.

– Tight end Tyler Petite did not participate in practice.

– Near the end of practice JuJu Smith-Schuster pulled up at the end of a play with an apparent injury to his leg, and he did not return to action. Helton does not believe the injury to be serious, however.

“He just had a little tweak there,” Helton said. “I don’t think it’s anything. He came back and he looked fine to me. I’ll check, but knowing JuJu, I’ll see him Thursday.”

– Jordan Simmons took the bulk of the reps with the No. 1 offense at right guard, with Chris Brown lining up at left guard.

– Quinton Powell continued to line up with the No. 1 defense alongside Michael Hutchings at one of the ILB spots.

– Tight end Taylor McNamara had a strong showing, making a number of catches, including a really nice over-the-shoulder 10-yard touchdown grab on a pass thrown by Browne.

– The team continued to get plenty of special teams work in. JuJu Smith-Schuster, Deontay Burnett, Dominic Davis, Isaac Whitney and Aca’Cedric Ware all returned kicks during a kick return period.

– Browne hit Daniel Imatorbhebhe for a gain of 10 yards over the middle.

– Darnold connected with D. Imatorbhebhe outside for a gain of close to 20 yards.

– Darnold hit Darreus Rogers outside for a 15-yard touchdown.

– Darnold hit McNamara over the middle for a gain of 10 yards before Olajuwon Tucker made the stop.

– Jalen Greene threw a dart over the middle to Ajene Harris for a 30-yard touchdown.

– Greene went back to Harris over the middle for a 10-yard gain.

– Fink tried to hit D. Imatorbhebhe over the middle, but Hart made a nice play on the ball and broke up the pass.

– Darnold hit Smith-Schuster for a gain of 10 yards.

– Darnold threw over the middle, and Tucker just missed out on an interception, dropping the ball.

– J. Davis was stopped by Rasheem Green and a host of others after a short gain.

– Browne hit McNamara over the middle for a gain of 12 yards.

– Aca’Cedric Ware was swarmed by Green and others for a loss.

– Browne hit Rogers outside for a 10-yard gain.

– Browne hit Burnett outside for a gain of 7 or 8 yards.

– Browne hit Harris in the corner of the end zone for a 15-yard TD.