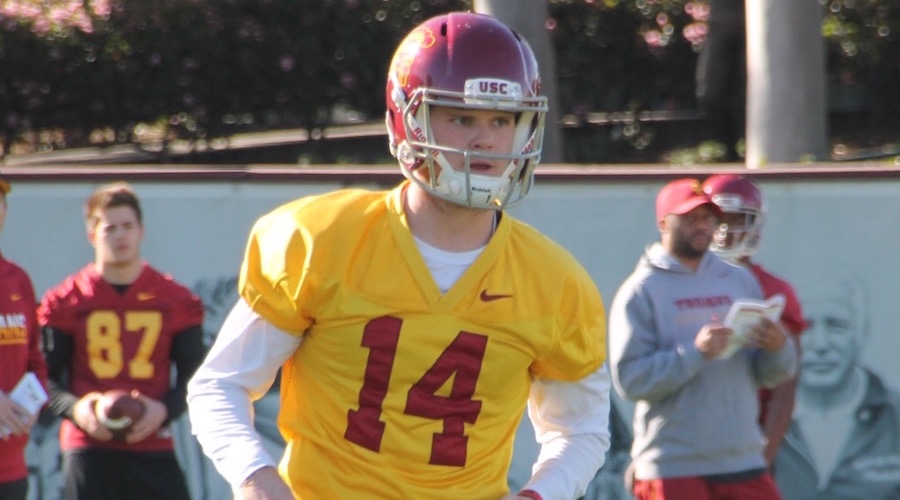 The Trojans kicked off spring practice on Tuesday with a throng of media in attendance thanks to mounting expectations for a team that finished the 2016 campaign with nine consecutive victories – after losing three of their first four contests to start the season. And while their dramatic Rose Bowl victory over Penn State took place just a little over two months ago, USC head coach Clay Helton said that the accomplishments of last year’s squad are now a thing of the past, and that his current team has moved firmly forward.

At the top of the list is replacing a number of standout veterans, including names like Stevie Tu’ikolovatu, Michael Hutchings, Zach Banner, Chad Wheeler, Adoree’ Jackson and JuJu Smith-Schuster. More than just their reliable play, it’s the leadership provided by those upper-classmen that must be supplanted.

“That’s the first thing – the development of the leadership of our younger guys,” Helton said. “With having that amount of older guys – eight in the combine, possibly 10 guys drafted off last year’s team – it’s going to be a time for young people that were freshmen and sophomores to step up and take more of a leadership role.”

Overall, Helton said that he was pleased with the performance of his team on Day 1, noting that they’re much farther ahead than they were at this same point in time last year, thanks in large part to the fact that nine of 10 full-time coaches from the fall are back, which has allowed the team to focus more on technique and fundamentals, rather than learning a new system.

– The team practiced in shorts and helmets.

– Lobendahn did work with a trainer on the side, however, and he appeared to be moving well. He also snapped to the quarterbacks during a 7-on-7 period.

– Dominic Davis (concussion-like symptoms), Porter Gustin (hand), and Nico Falah (back) also did not participate in practice. Helton said that he is hopeful that both Gustin and Falah will be back in action in two weeks following spring break. Josh Imatorbhebhe and James Toland were also out, although Helton did not discuss them in his post-practice media scrum.

– The No. 1 offense throughout much of the day consisted of Sam Darnold at QB, Ronald Jones II at RB, Jalen Greene at WR, Michael Pittman Jr. at WR, Deontay Burnett at WR, Daniel Imatorbhebhe at TE, Chuma Edoga at LT, Chris Brown at LG, Cole Smith at C, Talamaivao at RG and Roy Hemsley at RT.

– Helton said that the battle for the two offensive tackle spots will likely rage on through fall camp, and that he doesn’t believe that he will be able to announce definite starters following spring ball – especially with Lobendahn out. He did add, however, that Edoga stands out because of his experience.

– Matt Fink was consistently the No. 2 quarterback up in drills and during the team periods, but Jack Sears also took reps with the No. 2 offense as well.

– Freshman Andrew Vorhees ran with the No. 2 offense at right tackle.

– Ajene Harris came in at the nickel spot when the No. 1 defense went to that alignment, with Rector heading to the sideline.

– Helton said that there is no change in the status of Matt Boermeester, E.J. Price or Osa Masina at this time.

– On Tuesday safety Ykili Ross wore jersey No. 14 and Isaiah Langley wore No. 24. Mitchell wore a No. 4 jersey on the sideline.

– Jack Jones had a very solid day at corner, and he made a highlight-reel interception during a one-on-one period when he was up against Greene.

– C.J. Pollard picked off Sears during a 7-on-7 period, on a pass that was originally tipped by Katoa.

– Burnett was extremely impressive throughout practice, catching virtually everything thrown his way. He made a diving grab along the sideline in the 7-on-7 period that caught everyone’s attention.

– Among those in attendance was former Trojans receiver Nelson Agholor, as well as recent signees Joseph Lewis and Greg Johnson – both from nearby Los Angeles (Calif.) Hawkins.

(With the team in shorts and helmets, there aren’t a ton of highlight plays to report, but here are a few)

– Fink hit Cary Angeline over the middle for a gain of close to 10 yards.

– Houston and Co. stopped R. Jones for no gain.

– Pittman made a beautiful diving catch over the middle on a pass from Darnold.

– Darnold hit Pittman outside for a gain of 20 yards.

– Darnold hit Burnett over the middle for a gain of 10 yards.

– Fink hit Angeline outside for a gain of around 10 yards.

– Fink tried to hit Velus Jones over the middle, but Ross nearly picked it off.

– Darnold hit Petite over the middle for a gain of around 10 yards.

– Fink hit V. Jones outside for a gain of close to 10 yards.

– Darnold hit Pittman over the middle for a gain of over 15 yards.