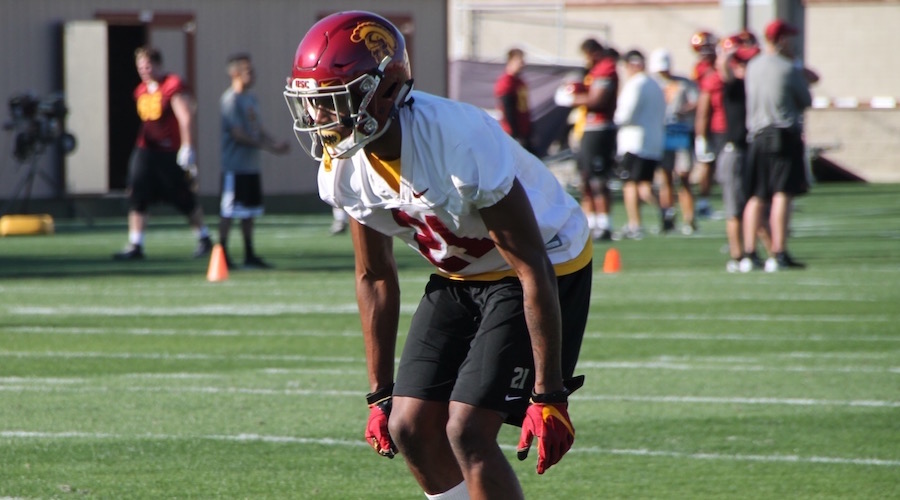 After a week away, the Trojans picked back up with spring drills on Tuesday, taking part in a shorts, shoulder pads and helmets practice under a steady flow of rain.

It was the defense that stole the show from the get-go, as Clancy Pendergast’s group compiled a total of five interceptions during the two-and-a-half-hour session.

“I’m really impressed with our defense right now and how they’re performing,” said USC head coach Clay Helton. “There were a number of turnovers, which was great to see. We’re really preaching getting the ball out, but also creating turnovers in the passing game, and defensively I thought we did a terrific job. I love the mentality that they’re playing with. And you can just see the experience that’s running in the defensive front, as well as the secondary carrying over.”

Jack Jones came up with the first pick of the session on a Matt Fink pass out to Tyler Petite, and Cameron Smith also recorded an interception on a pass that Sam Darnold appeared to be throwing away. The overwhelming star of the day, however, was safety Jamel Cook, who had three interceptions – all during one 7-on-7 period, and against three different quarterbacks in Darnold, Fink and Jack Sears.

Having redshirted during his freshman season this past fall due to an ankle injury, Cook is  getting extra reps this spring, and he’s making the most of them.

“How neat was it to see him out here today, show up and make some plays,” said Helton of the 6-foot-3 Cook. “I’m proud for him today. He’s really turning the corner, and we’ve all known that he’s a talented kid and the light kind of came on today, so that’s good to see.”

Initially thought to be a pure safety coming out of high school, Cook has been lining up at the nickelback spot with the No. 2 defense this spring after he impressed the coaching staff with his cover skills in the weeks leading up to USC’s Rose Bowl match-up with Penn State.

“We pictured him as a safety, which he is, but we saw him in one-on-ones late in the year in those three weeks of bowl preparation, and we said, ‘wow, this kid has unique cover skills,’” Helton said. “And the ability to rush off the edge – we did that a little bit early with Leon [McQuay] if you’ll remember – and that length coming off the edge. He has great quickness in pressures, he’s good enough to play man coverage [and] he’s a great run-support defender off the edge. He gives us something there that we want to take a look at.”

While there were plenty of highlight-reel plays on Tuesday, the practice session did not end on a positive note. A brief scuffle broke out between some players, including Chuma Edoga and Chris Hawkins, and the team was forced to do over 20 up-downs as punishment before they broke for the locker room.

“You’re dealing with ultra-competitive guys – that’s what this field is about,” Helton said. “But we also have to make great decisions, and when those decisions aren’t made you better handle it immediately. So, they got the point.”

– Redshirt freshman receiver Josh Imatorbhebhe appeared to make a full return after missing Week 1 due to illness. Daniel Imatorbhebhe (shoulder) still appeared to be somewhat limited, although he took part in a greater portion of practice than he did last week.

– After sitting out last week, Olajuwon Tucker (academics) did take part in the early portion of practice.

– Isaiah Langley spent the day with the No. 1 defense at the cornerback spot opposite Iman Marshall. Jack Jones went with the No. 2 group.

– The No. 1 offense to start the day featured Darnold at QB, Ronald Jones II at RB, Jalen Greene at WR, Deontay Burnett at WR, Michael Pittman Jr. at WR, Chuma Edoga at LT, Chris Brown at LG, Falah at C, Viane Talamaivao at RG and Roy Hemsley at RT.

– Not every positibe play was made by the defense on Tuesday. Sam Darnold connected with Velus Jones for two deep touchdown passes, and he also found R. Jones for a long touchdown pass along the sideline.

– During a field goal period Michael Brown connected on 6-of-7 attempts, with a long of around 40 yards out.

– Nwosu and Co. stopped R. Jones for a loss.

– Smith and others stopped Aca’Cedric Ware for no gain.

– Darnold hit Cary Angeline over the middle for a 10-yard TD.

– Fink hit Tyler Petite over the middle for a 20-yard TD.

– Fink tried to hit Petite outside, but J. Jones was there to make the pick.

– Fink tried to hit Pittman over the middle, bit Cook pulled in the interception.

– Darnold tried to hit Tyler Vaughns near the pylon for six, but Hawkins made a leaping pass break-up.

– Sears tried to hit Petite over the middle, but Cook was there to make the pick.

– Darnold hit V. Jones in the corner of the end zone for a 35-yard TD.

– Darnold threw outside, but Cook made a diving interception.

– Darnold hit Pittman over the middle for a gain of 10 yards.

– Darnold’s pass was picked off over the middle by Smith.

– Darnold hit R. Jones along the sideline for a 35-yard TD.

– Fink tried to hit J. Imatorbhebhe over the middle but J. Jones made a diving pass break-up.