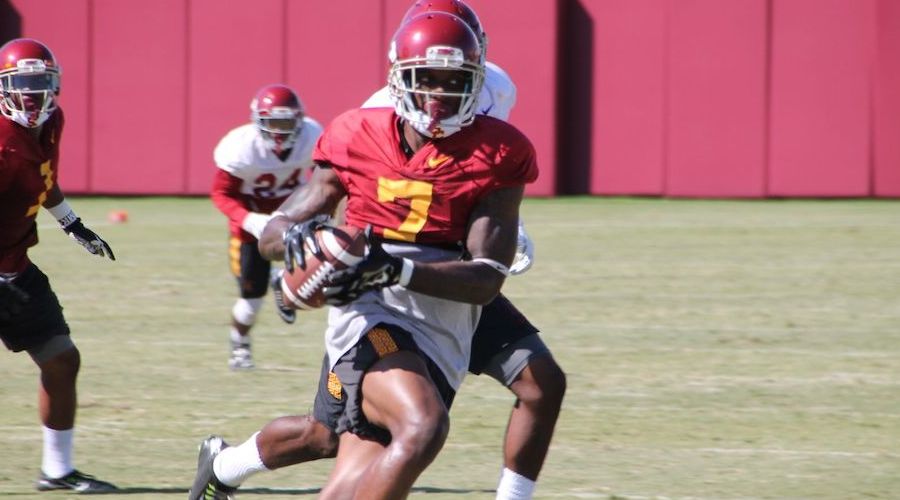 The Trojans were back on Brian Kennedy-Howard Jones Field on Tuesday morning, and with this past weekend’s loss to Stanford behind them, and their focus centered on moving forward to this Saturday’s matchup at Arizona State, USC head coach Steve Sarkisian said that he was pleased with what he saw from his team during the two-and-a-half hour, full-pads practice session.

“I think the best remedy to have when you’re coming off a tough loss is to get back on the field and get back to work, and I thought our guys did that today,” Sarkisian said. “There’s obviously still a bad taste in our mouth, but I think our players understand there’s plenty left out there for us this season – a great deal that we can go accomplish. They came out with the intention to get better, to work on some things that we need to get fixed, to work on the game-plan for Arizona State, to get prepared for a tough opponent on Saturday night, and I was impressed by that.”

After allowing Stanford quarterback Kevin Hogan and tailback Christian McCaffrey to put up big numbers, not surprisingly, Sarkisian said that two of those areas needing fixing concern 1) the rushing defense and 2) the passing defense.

Against the run, Sarkisian said that the Trojans need to do a better job of knocking the offensive line back, penetrating the line of scrimmage and making tackles-for-loss on first-down plays.

Against the pass, meanwhile, the Trojans head coach said that, more than just generating more pressure, the defensive rushers need to do a better job of staying disciplined and containing the quarterback after plays break down.

“In the pass game, you go back and you look at the film, we had three sacks,” Sarkisian said. “We probably missed Kevin another three times. We potentially could have had six sacks, but the problem was when we missed him our rush-lane integrity was not good, and we allowed for him to escape the pocket, whether it was on the perimeter or through the B gap on a couple of other instances that he really took advantage of and hurt us on. So, that’s what we need to clean up. We’re trying to go sack the quarterback and we’ll continue to, to make him uncomfortable, but our rush-lane integrity must improve.”

Senior tailback Tre Madden went to the sideline early in the second half of USC’s loss to Stanford with an upper calf injury and did not return, but he was suited up on Tuesday and took part in a good portion of practice in a limited capacity.

Taking part in warm-ups as well as the service team 11-on-11 periods, he was running well, and following practice he said that he anticipates being ready to go against the Sun Devils.

“It’s my upper calf. It’s just really sore. It’s tender, but getting on the field today and getting some kinks out, it feels really good,” Madden said. “I’m just getting more and more plays every day.”

Junior tailback Justin Davis took a majority of the snaps with the No. 1 offense during the contact 11-on-11 periods in place of Madden on Tuesday.

– Nose tackle Antwaun Woods (shoulder/tailbone) and rush end Scott Felix (shoulder) were both extremely limited, but Sarkisian said that in both cases there is no structural damage.

– Cornerback Kevon Seymour (knee) was also extremely limited, although Sarkisian said that he was able to do more on Tuesday than he did last week.

– Defensive linemen Jordan Simmons (knee) and Kevin Scott did not participate in practice.

– With the Trojans hitting the road this weekend for the first time this season, the offense wore white jerseys in practice, and the defense wore cardinal.

– With Woods sidelined, Claude Pelon ran with the No. 1 defense at nose tackle alongside Greg Townsend Jr. and Delvon Simmons.

– With Felix sidelined, Porter Gustin took the bulk of the reps with the No. 1 defense at rush end. Jabari Ruffin also saw extended time.

– Freshman Iman Marshall continued to line up with the No. 1 defense at the cornerback opposite Adoree’ Jackson.

– Freshman safety Ykili Ross had one of the plays of the day, picking off a deep pass from Cody Kessler at the goal line during a service team period.

– Jackson had another standout day at cornerback, deflecting a pass to Darreus Rogers during an early one-on-one period, and just missing out on an interception on a pass that was intended for Isaac Whitney in a later 11-on-11 team period.

– Cody Kessler hit Steven Mitchell Jr. over the middle for eight or nine yards with Jackson in coverage.

– J. Davis ran for four or five yards before Gustin made the stop.

– Kessler hit Taylor McNamara outside for a gain of six or seven yards.

– Kessler hit Isaac Whitney over the middle for a gain of 20 yards.

– Aca’Cedric Ware ran up the middle for a gain of around six yards.

– Browne connected with Tyler Petite outside for gain of around 12 yards.

– Kessler hit Deontay Burnett outside for a gain of 10 yards.

– J. Davis bounced outside and ran for a gain of around 15 yards before Marshall made the stop.

– Masina stopped Ware for no gain.

– Browne hit Mitchell over the middle for a gain of 10 yards.

– Kessler tried to hit Whitney outside, but Jackson broke up the pass.

– Kessler hit JuJu Smith-Schuster for a gain of over 10 yards over the middle.

– Kessler connected with Smith-Schuster for a gain of close to 20 yards over the middle before Chris Hawkins made the stop.

– Browne hit Burnett outside for a gain of 10 yards.

– Browne connected with De’Quan Hampton outside for a gain of around 15 yards before Marvell Tell made the stop.

– Browne hit Robby Kolanz along the sideline for a 30-yard touchdown.

– Kessler hit Mitchell over the middle for a 40-yard TD strike.

– Kessler hit Smith-Schuster outside for a gain of close to 10 yards before Marshall made the stop.

– Kessler tried to hit Burnett over the middle, but McQuay made a nice leaping pass break-up.

– Kessler hit Mitchell outside for close to 20 yards before John Plattenburg made the stop.

– Kessler hit Rogers over the middle for a 35-yard TD.