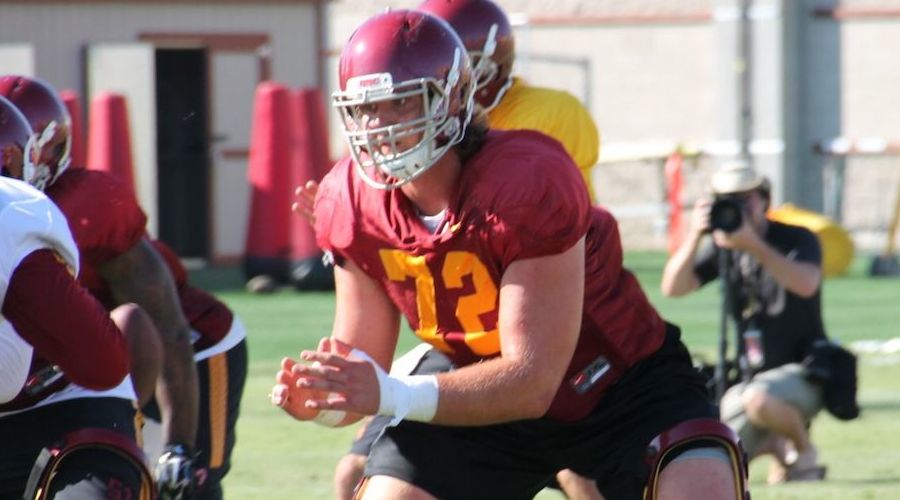 It’s officially game-week for the Trojans, and with Saturday’s clash at home with Arkansas State fast approaching, USC head coach Steve Sarkisian’s squad came out on Tuesday and took part in a spirited full-pads practice session that was marked by some physical play.

“I thought for our first game-week Tuesday, this was a really good, hard-fought, tough, physical practice, and that’s what Tuesdays are,” Sarkisian said. “When we’re getting prepared to play games, these are the types of practices that we have to get ourselves prepared for. They’re going to be a little rigorous, physically. They’re going to be a little rigorous, mentally, as we implement game plans and things, but all in all I thought the guys really responded well.”

One player who had a particularly big day was Chad Wheeler. Having been limited throughout the bulk of fall camp due to the knee injury that he suffered last season, as well as a concussion that he suffered in late-August, the big redshirt-junior has looked surprisingly sharp since his return to full-contact duty just last Wednesday.

Wheeler spent the entirety of Tuesday’s workout with the No. 1 offense at left tackle with a group that was comprised of Damien Mama at left guard, Max Tuerk at center, Toa Lobendahn at right guard and Zach Banner at right tackle.

Following practice Sarkisian wouldn’t confirm that the Trojans have a set starting five along the offensive line at this point, although he did heap plenty of praise upon Wheeler, appearing to indicate that he’s ready to take on a big role this weekend.

“Chad has really worked himself into good shape,” Sarkisian said. “He’s performing at a high level, and I feel good about him that if he goes out and plays every snap on Saturday, that we’ll be fine.”

This past weekend Sarkisian revealed that he has relinquished offensive play-calling duties to Clay Helton, and on Tuesday the Trojans offensive coordinator/quarterbacks coach spoke about his new role.

“It means a lot,” Helton said. “I thank Coach [Sarkisian], because he loves play-calling…I mean, he loves to play-call. But he also has a great vision for this university and for our football program. He wants to win a championship here, and to do that he felt like he had to overview everything, not just score points and set records. He had to look at the defense, special teams, look at personnel, make personnel changes, make in-game adjustments when needed, and I think this is really going to help, and I’m glad that we’re going to it.”

Helton, who last called plays in USC’s 2013 Las Vegas Bowl victory over Fresno State, will now move down to the sideline, with wide receivers coach Tee Martin going up to the booth

“If we were in a different situation and we didn’t have Tee Martin, we didn’t have Coach [Marques Tuiasosopo], we didn’t have Coach Sark – you’re talking about four quarterbacks on this staff where we’ve all seen and played the game – If we weren’t in that situation, and I felt like we needed better vision of what’s going on, I would be up,” Helton said. “But I can’t tell you how valuable it is when you get in a critical situation at the end of the game, where you can literally talk to the player and say, ‘This is exactly what I want you to do,’ – that’s critical.”

Helton also said that he and Sarkisian, who called the offensive plays during the 2014 season at USC, as well as during his five years as head coach at Washington, will still be in constant communication during the course of a game, with Sarkisian providing input, particularly in third-down and red zone situations.

“We’ve always talked a bunch, even when coach was calling the plays, and that will continue,” Helton said. “It even happened in the mock-game. You know, just the alert that we’re on the 30-yard-line in four-down territory on a third-and-five – it makes your mind shift, ‘hey, we can run the ball here with Tre Madden rather than having to throw a pass.’ And you hand off, and he gets a first down. So, just that communication from him is invaluable. Plus, you know, he’s got a sense too, of when a shot should be taken. And when he calls it, it’s getting called.”

New punter officially on board

There was a new punter suited up on Tuesday – Chris Tilbey.

“We added a punter, a blueshirt, Chris Tilbey from San Francisco City College,” Sarkisian said. “He’s an Australian punter-type that we’re really trying to invest in here for our future.”

Tilbey, originally from Melbourne, Australia, will count towards the recruiting class of 2016. He is a sophomore who has four years to play three.

Possessing a background in Australian Rules Football, at SFCC in 2014 he averaged 39.4 yards on 54 punts, with 19 of those pinning opponents inside the 20-yard-line.

Tilbey suited up on Tuesday and participated in practice, looking all the 6-foot-5 and 220 pounds that he is listed at.

– Justin Davis (ribs), Lamar Dawson (ribs), Claude Pelon (knee) and Jordan Simmons (knee) were all extremely limited on Tuesday. Sarkisian said that the team is preparing as if the four players will not be available this weekend, and that if any of them are able to return in time, it will be seen as a bonus.

– Tight end Taylor McNamara went to the sideline for most of practice after feeling lightheaded.

– Sarkisian said that freshmen running backs Dominic Davis, Ronald Jones II and Aca’Cedric Ware will all play against Arkansas State. Jones was back in action on Tuesday after dealing with some homesickness last week.

– With Dawson still sidelined, freshman Cameron Smith continued to run with the No. 1 defense at inside linebacker. Greg Townsend Jr. continued to go in place of Pelon at defensive end.

– Rasheem Green ran with the No. 3 defensive line during some of the 11-on-11 periods at defensive end.

– With McNamara on the sideline for a bulk of the day, Connor Spears and Tyler Petite took a majority of the reps with the No. 1 offense at tight end. Petite, in particular, had a very strong day, making some athletic grabs downfield.

– During a late field goal period both Alex Wood and Matt Boermeester went 2 for 3 on their attempts.

– Wide receiver Jackson Boyer has switched from jersey No. 17 to No. 84.

– Kessler connected with JuJu Smith-Schuster outside for a gain of close to 10 yards with Jackson in coverage.

– Kessler hit Christian Tober outside for a gain of seven or eight yards.

– Smith provided pressure on Kessler, forcing the senior QB to throw the ball away.

– Kessler hit Spears outside for a gain of around 15 yards.

– Ware rushed inside for a gain of three yards before Osa Masina put a good pop on him.

– Max Browne hit George Katrib down the seam for a gain of close to 40 yards.

– Browne connected with Steven Mitchell outside for a 30-yard touchdown with Isaiah Lagnley in coverage.

– Madden followed Tuerk and Mama for a 15-yard gain.

– Kessler hit McNamara outside for a gain of six or seven yards.

– Browne connected with jalen Greene outside for a gain of close to 15 yards before Jonathan Lockett made the stop.

– Michael Hutchings and Co. stuffed Ware at the line-of-scrimmage.

– Anthony Sarao stopped Madden after a short gain.
– Kessler hit Darreus Rogers over the middle for a 10-yard gain before Plattenburg made the stop.

– Kessler hit Smith-Schuster over the middle for a gain of around 15 yards before Jackson made the stop.

– Browne found Mitchell over the middle for a 25-yard TD.

– Petite made a nice over-the-shoulder grab for a 25-yard touchdown on a pass from Kessler.

– Kessler hit Jones outside for a six-yard gain.

– Woods and a host of others stopped Jones for no gain.

– Petite reached up high and pulled down a Browne pass over Kevon Seymour for a gain of 20 yards.

– Kessler hit Smith-Schuster outside for a gain of 15 yards before Tell made the stop.

– Kessler hit Jahleel Pinner with a quick pass outside, with the fullback making a nice spin move and breaking free for a 20-yard TD.

– Browne hit Isaac Whitney outside for a 10-yard gain before Langley made the stop.

– Browne hit Whitney over the middle for a 15-yard gain.