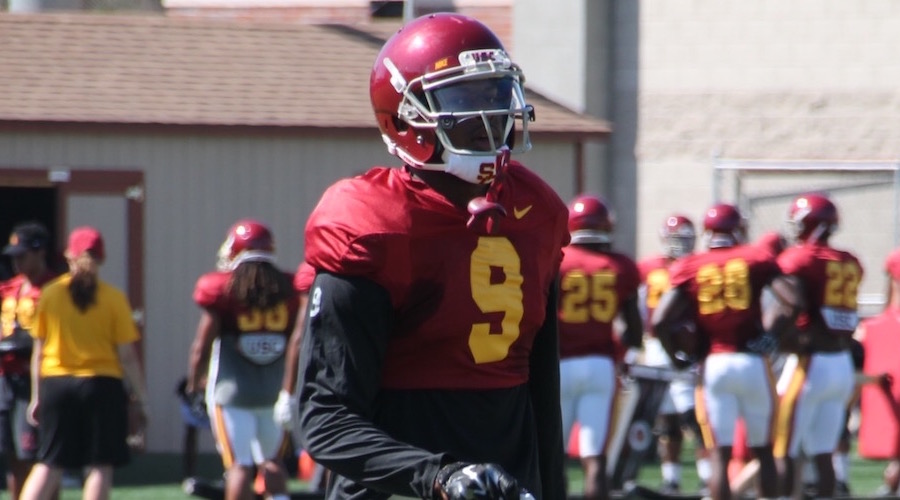 Fresh off the heels of a 52-6 blowout loss to Alabama in their season opener, the Trojans were back at work on Tuesday as they began preparations for their next opponent, Utah State. After having been challenged by the USC coaching staff prior to practice, they came out for the full-pads session playing physical, and as Trojans head coach Clay Helton noted, angry as well.

“I love how the kids came out and competed,” Helton said. “We’ve got a mad football team right now. I wish we could play today to be honest with you. It was ultra-competitive out here, which is a good sign.”

The most direct example of the anger and competitiveness that marked practice occurred during the final 11-on-11 period. Max Browne threw a pass to JuJu Smith-Schuster along the sideline that the junior wide receiver couldn’t bring down. When the ball fell incomplete the defensive sideline went wild, and that’s when Smith-Schuster got into a scuffle with what appeared to be multiple players – most notably safety Ykili Ross.

Smith-Schuster was visibly heated after the exchange, and he ultimately walked a good 50 to 100 yards away with Adoree’ Jackson joining him and appearing to offer some words of encouragement. Smith-Schuster eventually cooled down and returned to the offensive sideline.

Following practice, Helton said that he was anything but bothered by the incident.

“I would rather have it like that to be honest with you,” Helton said. “What you’re always scared of is all of a sudden you have a huge game, and then you come back and you’re a little lackadaisical.

“JuJu reminds me so much of Marqise Lee, and both are two of the most competitive men I’ve ever seen in my life. And when you have that much passion and that much competitiveness, sometimes it spills over. Every day is a game to that kid. And that’s what I appreciate about him. Scuffles happen in football practice, and we’re all brothers out here. Everybody hugged up and went on, but I like the competitiveness that we had.”

Smith-Schuster is coming off a frustrating performance against Alabama in which he compiled just one reception for nine yards. Helton said that the staff has made it a priority to find ways to get him more touches, just as they did with Lee and Robert Woods in recent years past.

“I think a little bit of being able to move him around, whether it’s motioning, putting him in the slot a little bit more, getting him on safeties and linebackers rather than the corner, things like that we can do, and we will do moving forward,” Helton said.

– Among those who did not participate in practice were Noah Jefferson (shoulder sprain), Toa Lobendahn (knee), John Plattenburg (concussion) and Quinton Powell (illness).

– Helton said that Lobendahn was held out due to swelling in the knee opposite from the one that was operated on last season.

– Helton said that Jefferson’s shoulder is very sore, but that they are hoping he will be ready to return to action later this week.

– Defensive lineman Khaliel Rodgers went to the sideline early in practice with an injured hamstring, and he did not return. Helton said that he thinks he will be back later in the week.

– Tight end Taylor McNamara went to the sideline with an ankle injury late, but it does not appear to be serious.

– Freshman safety Jamel Cook (foot) suited up and practiced for the first time. He did so in a limited capacity, taking part in individuals and a portion of one service team period.

– Rasheem Green, who suffered an elbow sprain against Alabama, also participated in the entire practice. He went with the No. 1 defense at one of the defensive end spots.

– Damien Mama spent the bulk of the day with the No. 1 offense at left guard.

– Helton said that there was no new update regarding Osa Masina and Don Hill, and that the university is allowing them to practice, as well as to attend classes and team meetings. Both players wore black jerseys and ran with the service team on Tuesday.

– Lining up with the No. 2 defense at the two outside linebacker spots throughout the day was Jordan Iosefa (SAM) and Connor Murphy (Predator).

– Wide receiver Darreus Rogers had an excellent day, making two of the biggest highlight plays of practice. The first came during an early one-on-one period where he leapt up high over Jack Jones to pull down a pass along the sideline. During the final 11-on-11 period he was up against Jones again, and this time he got behind the freshman and pulled down a 35-yard touchdown pass.

– There was an early 9-on-7 period marked by some physical play that seemed to set the tone for the day. MIKE linebacker Cameron Smith made a couple really nice stops at the line-of-scrimmage during this period.

– During an early kickoff period Leon McQuay III came up with one of the hits of the day, leveling the return man, Jake Russell.

– Ronald Jones II bounced outside for a gain of 7 or 8 yards.

– Browne hit Steven Mitchell Jr. outside for a gain of close to 10 yards.

– Sam Darnold threw outside, and Jonathan Lockett nearly picked the pass off.

– Darnold hit Deontay Burnett outside for a gain of around 10 yards.

– Darnold again went outside to Burnett for a gain of 10 yards.

– Browne tried to hit Smith-Schuster outside with Ajene Harris in coverage, but the ball fell incomplete. (This is when the scuffle took place.)

– Browne hit Jalen Greene outside for a gain of close to 10 yards.

– Darnold hit Aca’Cedric Ware outside for a gain of 11 or 12 yards.

– Darnold went deep over the middle to Greene, but Deion Hart jumped up high and broke up the pass.

– Hutchings stopped Ware for no gain.

– Darnold went deep along the sideline to Josh Imatorbhebhe, but Iman Marshall broke up the pass.