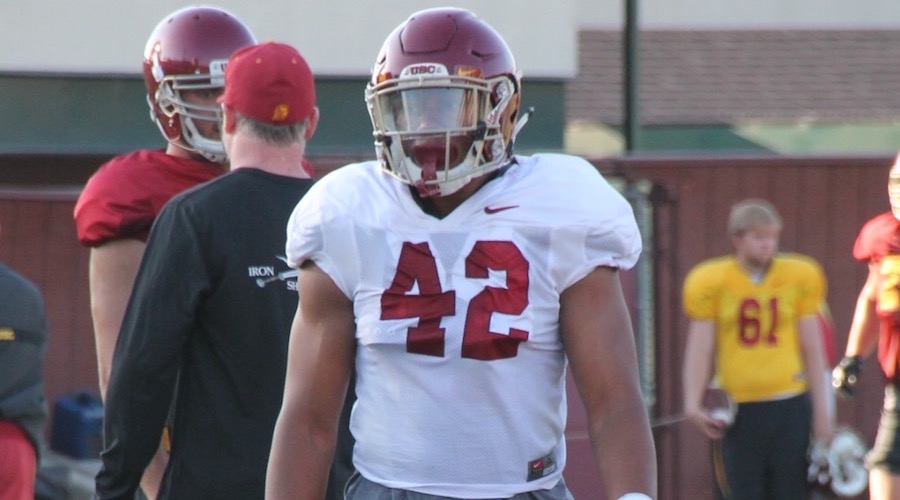 After suffering their third loss in four games this past Friday night, the Trojans were back out on Brian Kennedy-Howard Jones Friday on Tuesday, taking part in a full-pads practice session.

While the Trojans players are clearly disappointed in their lackluster start this season, there was no sign of a post-loss hangover during the two-and-a-half hour session as they were focused on the task at hand, which is gearing up for a 4-0 Arizona State team.

“As a grown man and as a professional, there’s no time to be sad,” said USC wide receiver JuJu Smith-Schuster. “There’s a whole other future of eight games in front of you.”

USC head coach Clay Helton was clearly encouraged by the demeanor of his team, and he’s hoping that it leads to some improved play in a number of areas heading into Saturday’s matchup with the Sun Devils.

“I felt last week in going into that game vs. Utah that it was very workman-like, and they came out like that again today,” Helton said. “They’ve improved week-to-week, from Alabama to Stanford, from Stanford to Utah, and the last piece is knocking out the little things. And to do that, the attention to detail things have to be done, and I think they’re glued in right now.”

With the USC defense set to face a talented dual-threat passer this weekend in Arizona State’s Manny Wilkins, Trojans cornerback Ajene Harris – a high school quarterback – spent much of the day serving as the service team signal-caller. Jalen Greene also spent some time going up against the No. 1 defense during some of the team 11-on-11 periods in an effort to help the unit prepare for what they might see on Saturday.

Through four games, Wilkins has proven to be dangerous weapon for the Sun Devils, completing 67.2 percent of his passes for 1,085 yards and five touchdowns with three interceptions, and he’s also rushed for 263 yards and four touchdowns.

“I think the quarterback, Manny Wilkins, is playing phenomenal,” Helton said. “Not only is he efficient in the pass game, but really what stands out to you is his running ability. He’s the second leading rusher as far as number of rushes, averaging almost 13 a game, so we’re going to have to hold him in check, and really focus on his zone-read opportunities.”

But in order for the USC defense to find success against Wilkins, Helton admitted that they have to do a better job of getting after the quarterback than they have up to this point. Against Utah, in fact, they didn’t record a single sack.

“I think that’s a point of emphasis for Clancy [Pendergast] this week,” Helton said. “He really has honed in on it. One, in our one-on-one pass rush, but also with some other things, scheme-wise, that we can do to help provide some pressure.”

– Noah Jefferson was not in attendance on Tuesday, and Helton said that he likely won’t return to action until the beginning of November. The big defensive lineman has been sidelined with a shoulder injury, and he recently returned to campus after a brief trip home to Las Vegas to deal with a personal issue.

“Noah, we’re going to go ahead and hold for a little bit so he can catch up academically,” Helton said. “I think it’s going to take a couple weeks, not only because of the academics, but to finish getting healthy. He’s got to play some catch-up, and we’re always going to put academics first, and make sure that he’s fully healthy. I’m hoping for the month of November for him to be caught up and be ready to go.”

– Starting right tackle Zach Banner was suited up, but he did not participate in practice due to the ankle injury that he suffered against Utah. Helton said that he believes he will return to action on Wednesday.

– Starting left guard Damien Mama went out late in practice with a stinger. Helton said that he anticipates Mama returning to action on Wednesday.

– Chuma Edoga (illness) returned to action. He primarily worked with the No. 2 offense at right tackle.

– Jack Jones did some light work early, returning punts in warm-ups, but he sat for the remainder of the day with an ankle injury. He is 50-50 to play on Saturday.

– John Plattenburg, who cleared concussion protocol over a week ago, was limited, with Helton noting that he is, “about ready to go.”

– Freshman tailback Vavae Malepeai, who has been sidelined since early in fall camp with a broken scapula, suited up for the first time since he suffered the injury, and he was working with a trainer on the side.

– Defensive lineman Kenny Bigelow, out since last March with a knee injury, also appeared to get more work in than we’ve seen before. He worked with a trainer and it looked like he was moving extremely well.

– With Banner sidelined, the No. 1 offensive line to start the day featured Chad Wheeler at LT, Mama at LG, Nico Falah at C, Viane Talamaivao at RG and Jordan Simmons at RT. Simmons remained at RT throughout the entire day.

– When Mama went to the sideline, Chris Brown took his place at left guard.

– Jonathan Lockett came up with an interception during an early 11-on-11 period, picking off a Sam Darnold pass that was tipped into the air at the line by Stevie Tu’ikolovatu.

– Later on, Uchenna Nwosu intercepted a Jalen Greene pass that was intended for Michael Pittman Jr., but deflected into the air by Iman Marshall.

– The arguable offensive play of the day occurred during the final 11-on-11 period when Darnold launched a 40-yard touchdown pass to Darreus Rogers. Darnold also connected with Pittman for a 35-yard TD.

– Among those in attendance were NFL scouts from the Atlanta Falcons, Detroit Lions, Pittsburgh Steeler and Washington Redskins.

– Darnold’s pass was tipped at the line by Tu’ikolovatu, and Lockett picked it off.

– Justin Davis ran behind Simmons for a gain of 7 or 8 yards.

– Greene tried to hit Josh Imatorbhebhe outside, but Marshall broke up the pass.

– Murphy stopped Aca’Cedric Ware after a gain of 3 or 4 yards.

– Darnold hit De’Quan Hampton outside for a 10-yard gain.

– Green tried to hit Pittman outside, but Marshall tipped the ball in the air, and Nwosu intercepted it.

– Darnold hit Pittman outside for a gain of around 15 yards.

– Darnold hit Daniel Imatorbhebhe outside for a gain of close to 10 yards.

– Darnold hit Smith-Schuster outside for a gain of 7 or 8 yards.

– Darnold hit Pittman over the middle for a 35-yard TD.