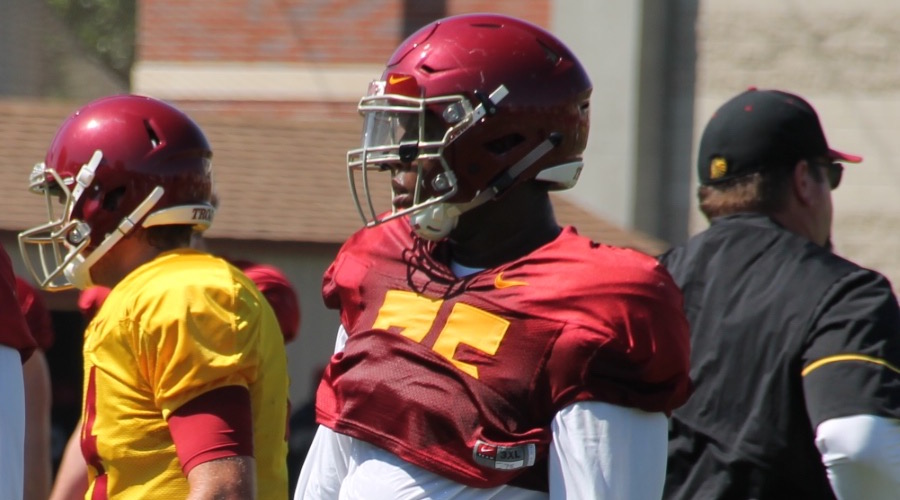 There certainly is no shortage of drama at USC these days.

Just one day after Clay Helton informed the media that Sam Darnold was taking over the role as the Trojans’ new starting quarterback, the USC head coach made another major announcement following the team’s Tuesday practice session – this time that freshman offensive tackle E.J. Price will transfer to another program.

Price, a product of Lawrenceville (Ga.) Archer, arrived at USC this past summer as one of the most highly touted members of the Trojans’ signing class. He did not see any time on the field in the first three games of the season.

“E.J. has some personal family issues that are going on,” Helton said. “A lot of homesickness, and he was missing family really bad. With us sitting down and visiting, we really felt mutually that it was important for him to go find a school that is closer to home, where he can deal with his family.”

Contrary to some internet rumors that were circulating earlier in the day, Helton said, with a laugh, that the 6-foot-6, 325-pound Price did not punch him over the weekend.

“I wouldn’t be here, I would be dead,” Helton said. “It may make my face look better.

In looking at the long-term, Price’s departure is obviously a blow, but Helton said that he believes that the Trojans are still in a very good place along the offensive line when it comes to depth.

“We’ve got a very, very solid two-deep,” Helton said. “When it really hits me is when I go over to the defensive service team. I see the three’s, and you’re looking at Frank Martin, Roy Hemsley and Cole Smith, and you look at the quality of that group that is helping our guys get ready when we do service. We’re a deep team right now.”

As for the practice itself, the Trojans were in shorts, shoulder pads and helmets for the second consecutive day. With the Utah defense having compiled a Pac-12 best 15 sacks through three games, Helton said that there was a special emphasis placed on preparing for the Utes’ formidable pass-rush.

“We worked a lot today against the five and six-man pressures that we’re going to see, especially on third down,” Helton said. “This is one of the best pass-rushing units that we’ll see all year – as evident by their first three games.”

As for the player who will have those talented pass rushers coming after him, Darnold, Helton said that the redshirt-freshman quarterback has his full confidence – despite the fact that he will be making his first start in front of what is expected to be a raucous crowd in Rice-Eccles Stadium.

“I would not have made the change if I was not confident in my decision,” Helton said. “I think what he’s done on that stage against Alabama, showing the poise that he did, versus Stanford, showing the poise he did, the anticipation he’s shown in his throws, his knowledge of the offense right now, he’s making plays.”

Lining up with the No. 1 offense throughout practice, Darnold had a very solid day, completing deep passes to Jalen Greene, Adoree’ Jackson, De’Quan Hampton, JuJu Smith-Schuster and Tyler Petite.

– In anticipation of the rain that is expected to hit Salt Lake City on Friday night, the team, once again, practiced with wet balls at times. Crowd noise was also piped in during some of the 11-on-11 periods again as well.

– Matt Fink (ankle), Noah Jefferson (shoulder) and C.J. Pollard did not participate in practice due to injury. Jamel Cook (foot) worked with a trainer off to the side during the early portion of practice, before taking the rest of the day off.

– Malik Dorton also appeared to be limited, with Helton noting that he is dealing with a hip injury.

– Taylor McNamara went down late in practice with a foot injury after getting stepped on. Helton said that an X-Ray would be taken of his foot following practice.

– As noted above, Jackson took reps on both sides of the ball.

– After having played sparingly with the No. 1 defense on Monday, Chris Hawkins saw considerably more action with the unit on Tuesday. He appeared to split time with Marvell Tell. Leon McQuay III lined up at the other safety spot. Jonathan Lockett came in to cover the slot when the defense went into a nickel alignment.

– The No. 1 Offensive line consisted of Chad Wheeler at LT, Damien Mama at LG, Nico Falah at C, Viane Talamaivao at RG and Zach Banner at RT. The primary No. 2 group consisted of Chuma Edoga at LT, Chris Brown at LG, Khaliel Rodgers at C, Jordan Simmons at RG and Clayton Johnston at RT.

– During a 7-on-7 period against the scout team, McQuay came up with a pick-six.

– Former Trojans players Darrell Rideaux and Dale Thompson were also on hand. Thompson is now a scout for the Tennessee Titans.

– Darnold picked up close to 10 yards on the ground.

– Max Browne hit Dominic Davis outside, but McQuay came up and limited the play to a short gain.

– Darnold hit Daniel Imatorbhebhe outside for a 10-yard gain.

– Darnold hit Ronald Jones II for a gain of around 10 yards.

– Darnold hit Adoree’ Jackson in the end zone for a 40-yard TD.

– Browne hit D. Davis outside for a gain of around 20 yards.

– Darnold hit Smith-Schuster over the middle for a gain of around 15 yards.

– Darnold hit Steven Mitchell Jr. outside for a gain of 12 or 13 yards.

– Darnold hit Smith-Schuster outside for a gain of over 30 yards.

– Darnold hit Isaac Whitney over the middle for close to 10 yards.

– Darnold hit Petite over the middle for a 35-yard TD.

– Darnold hit Deontay Burnett outside for a 10-yard gain.

– Browne hit Velus Jones outside for a gain of 15 yards.

– Browne ran up the middle for a gain of close to 10 yards.