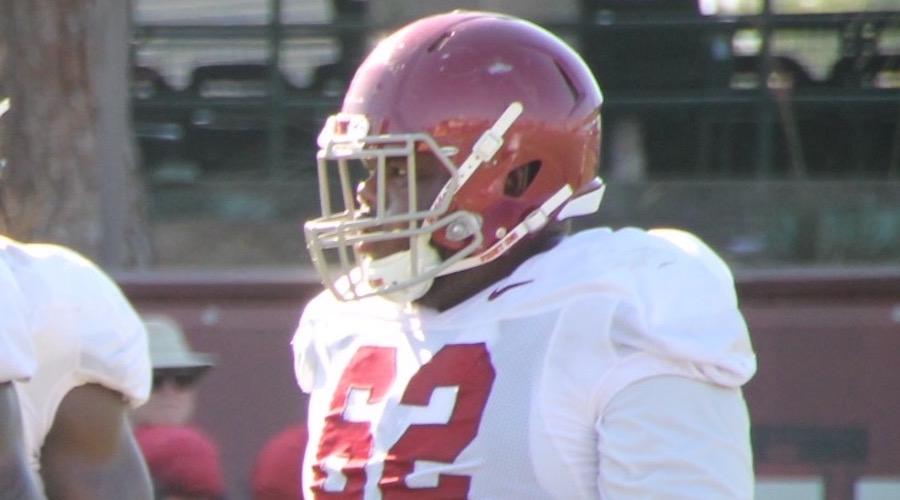 Coming off a 45-7 bounceback victory over Utah State, a focused looking Trojans squad went back to work on Tuesday with their full focus turned toward their next opponent, Stanford.

Set to take on the Cardinal this coming Saturday in Palo Alto, Clay Helton had high praise for the Stanford defense, not to mention offensive stars like big-play running back Christian McCaffrey, quarterback Ryan Burns as well as the entire wide receiver corps.

The most common topic that the Trojans head coach kept coming back to, however, was Stanford’s physicality on both sides of the ball, and the significant challenge that USC faces in that regard.

“You saw the difference in the Pac-12 championship game,” Helton said. “They were the more physical team in the second half. They took the lead in the third quarter, and from that point on they were ahead of us in physicality and in finishing the game. It’s going to be very important. It’s something that we worked on in the spring and fall for this game, and I’m looking forward to seeing where we’re at. I know our guys are excited about it. They were excited about coming out last week and improving, and they’re excited to go up north to face a very, very good Stanford team.”

Rodgers flips back to offense

After lining up exclusively along the offensive line throughout his first three years on campus, redshirt-junior Khaliel Rodgers made the move to nose tackle this past summer, and he appeared to be fitting right in this fall as a reserve there.

With starting center Toa Lobendahn recently declared out for the season due to a torn ACL, however, Rodgers was asked by the coaching staff to switch back to his old center position, and that’s where he lined up on Tuesday.

Despite the time away from the position, Rodgers looked more than at home on Tuesday, snapping well throughout the two-and-a-half hour session while running with the No. 2 offensive group. Nico Falah continued to run with the No. 1 offense at center.

“Coming back to offense was nothing new,” Rodgers said. “I’ve been playing O-line since I was in high school, so it’s second nature to me.”

Rodgers missed the Utah State game due to a hamstring injury, but he said that he is now fully recovered.

“It feels good,” Rodgers said. “Everything is well now.”

– The team practiced in full pads on Tuesday.

– Repeating what he stated during an earlier Pac-12 media call, Helton said that both Osa Masina and Don Hill have been suspended from all team activities. Reflecting that, neither player was at practice. Both players are under investigation for alleged sexual assault.

– Among those who did not participate in practice due to injury were Zach Banner (illness), Jamel Cook (foot), Noah Jefferson (shoulder) and John Plattenburg (concussion).

– Helton said that Jefferson is 50-50 to play on Saturday, but he also added, “He will probably not be in the game, to be honest with you.”

– Safety Marvell Tell (concussion) took part in a good portion of practice on Tuesday, but he was limited.

“He’s going to go get checked by the doctor one more time,” Helton said. “He was out here today – no contact, moving around, and he had no symptoms. He really felt good, but we’ve got to get him cleared by the doctor to make sure he can go for the game. We should know that tomorrow.”

– Running back Ronald Jones II was limited – primarily due to a thigh contusion.

– With Banner out, Chuma Edoga lined up with the No. 1 offense at right tackle. Chad Wheeler continued to run at left tackle.

– Damien Mama spent the day with the No. 1 offense at left guard.

– Helton reiterated that quarterback Sam Darnold will continue to see time this weekend in certain red zone and goal line situations, just as he did against Utah State.

– Freshman Velus Jones wore a No. 5 jersey with the scout team offense on Tuesday, doing his best Christian McCaffrey impersonation.

– Isaiah Langley blocked a Matt Boermeester field goal attempt during a special teams period. After making the block, Langley attempted to return it, but after picking up the ball he stumbled to the ground.

– Safety Matt Lopes came up with an interception during a late service team period.

– Isaac Whitney also came up with a big play against the service team, leaping up high to pull down a deep pass along the sideline.

– Cornerback Adoree’ Jackson made a great leaping pass break-up during the final 11-on-11 period on a throw from Darnold to Josh Imatorbhebhe.

– Practice ended on a deep pass over the middle from Darnold to Cary Angeline.

– Also on hand were NFL scouts from the Buffalo Bills, Indianapolis Colts and Jacksonville Jaguars.

– Max Browne hit Darreus Rogers over the middle for close to 10 yards.

– Justin Davis ran inside for a gain of around 5 yards.

– Browne hit Steven Mitchell Jr. over the middle for 8 or 9 yards.

– Browne hit JuJu Smith-Schuster outside for a gain of close to 10 yards.

– Browne hit Smith-Schuster over the middle for 10 yards.

– Darnold hit Jalen Greene deep down the middle for a gain of around 40 yards.

– Browne hit Mitchell over the middle for a gain of around 20 yards.

– Browne hit Mitchell outside for a gain of 6 or 7 yards.

– Browne hit Smith-Schuster outside for a gain of 12 or 13 yards.

– Darnold hit Michael Pittman over the middle for close to 20 yards before Iman Marshall made the stop.

– Darnold hit J. Davis outside for a gain of close to 15 yards.

– D. Davis darted outside for a big gain.

– Jackson broke up the deep pass from Darnold to J. Imatorbhebhe.

– Darnold hit Angeline over the middle for a gain of around 25 yards.