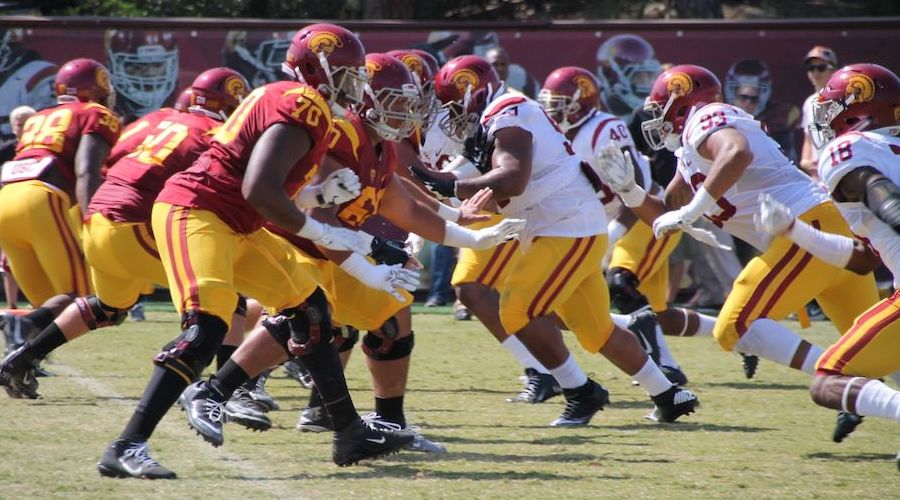 Following an incident this past Saturday at the annual “Salute to Troy” event at USC in which Steve Sarkisian reportedly slurred his speech and used an expletive, the Trojans head coach met with a throng of reporters on Tuesday morning just prior to his team’s practice session.

“First and foremost, I’d like to apologize for my behavior Saturday night,” Sarkisian said. “It was inappropriate. I feel bad for the University of Southern California. I feel bad for [USC president] Max Nikias, [Athletic Director] Pat Haden, I feel bad for our players and I feel bad for my own kids. The way I acted was irresponsible and it’s something that I obviously don’t condone.”

Sarkisian said that his behavior came about due to a mixing of medication and alcohol.

“I think the moral of the story is this: When you mix meds with alcohol, sometimes you say things and or do things that you regret,” Sarkisian said. “I regret it. I’m sorry. I’m sorry for all of our fans, donors and all of the people that were in attendance, but I’m going to move forward, and we’re going to be great. I can’t wait to start coaching again today with the team that we have.”

When asked if he thought that he had a drinking problem, Sarkisian replied:

“I don’t believe so, but through Pat and through the university, I’m going to find that out,” Sarkisian said. “I’m going to go to treatment. I’m going to deal with it. In the meantime, I’m going to be the head football coach here. And I believe I can be.”

Sarkisian went on to say that he will not drink alcohol this season and that it is now banned from the coaches’ locker room.

Jackson back on defense

As for the practice itself, it certainly appeared to be lacking the normal amount of energy that was observed throughout most of fall camp, but then Adoree’ Jackson came up with one of his signature highlight-reel plays that seemed to pump at least some of the enthusiasm back into the team.

After spending the last six practice sessions at wide receiver, the talented sophomore lined up exclusively at cornerback on Tuesday, making his presence felt on the very first play of the initial 11-on-11 period when he picked off a quick Cody Kessler pass outside and returned it the remaining 10 yards for a touchdown.

Jackson also deflected a pass a little later, and he was stellar in coverage throughout the day.

Safeties John Plattenburg and Chris Hawkins also compiled interceptions, although Plattenburg’s came on a Max Browne pass that was bobbled into the air by Tyler Petite, and as a whole, both Kessler and Browne appeared to be sharper on Tuesday than they were in the scrimmage on Saturday.

On his way out of Brian Kennedy-Howard Jones Field following practice, Sarkisian greeted the remaining media and said: “It was a good practice, for what it’s worth.”

– Damien Mama, who had missed time recently with an undisclosed injury, returned to full-time duty on Tuesday. He ran exclusively with the No. 1 offense at left guard.

– Also making a full return was wide receiver Steven Mitchell, who was limited this past Saturday after rolling his ankle.

– Freshmen Ykili Ross and Christian Rector both went to the sideline with undisclosed injuries and did not return to action. Ross was spotted with a sling on his right arm.

– The Trojans practiced in full-pads.

– With Mama back in the fold, USC featured a No. 1 offensive line group from much of the day that had Toa Lobendahn at LT, Mama at LG, Max Tuerk at C, Viane Talamaivao at RG and Zach Banner at RT.

– Freshman Iman Marshall took extensive reps with the No. 1 defense at the cornerback spot opposite Jackson.

– With Woods sidelined, Cody Temple ran with the No. 1 defense at nose tackle.

– Rush end Porter Gustin had another in what has been a string of solid practice sessions, compiling at least two sacks.

– Hawkins also had a strong day at safety, making a number of tackles near the line-of-scrimmage, in addition to coming up with the interception.

– Kris Albarado was really booming some punts for the second consecutive practice session, drawing praise from some of the Trojans assistants.

– During a late placekicking period Alex Wood connected on 2 of 4 field goal attempts, while Matt Boermeester connected on 3 of 3 attempts.

– Kessler threw a quick pass outside to Darreus Rogers, but Jackson was there to intercept the ball and return it for a TD.

– Tre Madden ran behind Mama and Lobendahn for a gain of around seven yards before Anthony Sarao made the stop.

– Kessler hit Mitchell outside with a quick pass, but Chris Hawkins came up and made the stop for no gain.

– Browne connected with Mitchell over the middle for a gain of 15 yards with Marshall in coverage.

– Osa Masina came up and stopped Dominic Davis for no gain.

– Browne hit Tober over the middle for a gain of 10 yards before Marvell Tell made the stop.

– Browne connected with Connor Spears over the middle before Ross came over a put a hit on him. Ross went to the sideline holding his arm/shoulder.

– Browne hit Jalen Greene outside for a gain of 15 yards before Hawkins made the stop.

– Aca’Cedric Ware weaved his way for a gain of around eight yards.

– Kessler completed a pass outside to Rogers for 10 yards.

– Ware ran outside for a gain of six or seven yards before Marshall and others made the stop.

– Browne connected with Greene outside for a 10 yard gain before Kevon Seymour made the stop.

– Browne threw outside to Petite, but the freshman bobbled up into the air and Plattenburg picked it off.

– Kessler hit Rogers along the sideline for a gain of over 30 yards with Sarao in coverage.

– Browne threw a quick pass outside to Spears, but Hawkins came up in a hurry and dropped him for no gain.

– Ware ran for a gain of almost 10 yards before Jonathan Lockett made the stop.

– Darnold connected over the middle with Tober for a gain of 14 or 15 yards before Cravens made the stop.

– Kessler tried to hit JuJu Smith-Schuster over the middle, but Hawkins was there to pick off the pass.

– Kessler hit Mitchell over the middle for a gain of almost 20 yards.

– Kessler connected with Smith-Schuster outside for a gain of close to 10 yards with Seymour in coverage.

– Kessler hit Tober outside for a gain of 25 yards.

– Browne hit Spears over the middle for 11 or 12 yards before Cameron Smith made the stop.

– Browne connected deep with Greene along the sideline for a gain of almost 40 yards.

– Kessler tried to connect with Rogers outside, but Jackson broke up the pass.

– Madden ran outside for a gain of seven or eight yards before Tell made the stop.

– Sarao and Co. stopped D. Davis for no gain.

– Browne connected with Robby Kolanz near the sideline for a gain of 15 yards before Lockett made the stop.

– Browne hit Petite down the sideline over Langley for a 20-yard gain.