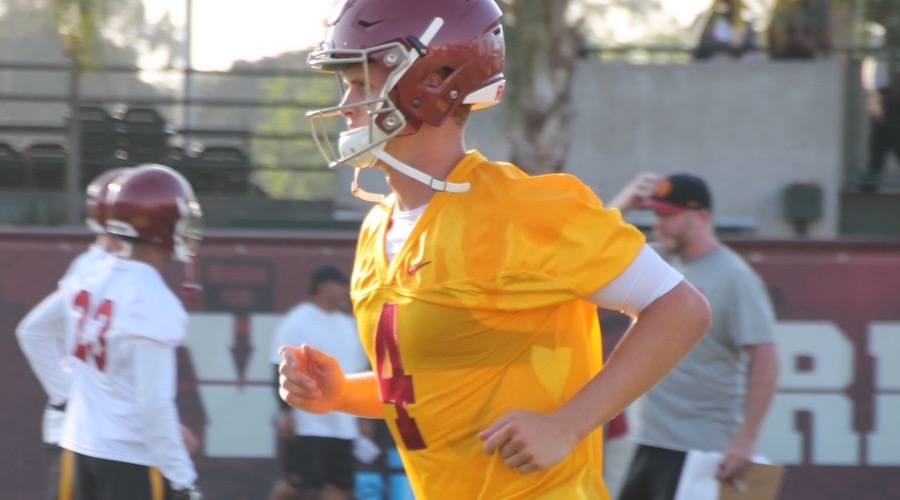 With fall camp officially in the books, the Trojans were back on Brian Kennedy-Howard Jones Field on Tuesday to kick off what USC head coach Clay Helton referred to as a “mock game week,” with the team officially switching their full attention to the opponent that they’re set to face on Sept. 3 – Alabama.

“They have playmakers across the field,” Helton said. “I’m extremely impressed with Calvin Ridley as an offensive weapon – without question one of the top receivers in the country. And I like the big back, Bo Scarbrough. He’s going to be a good player for them. Defensively, the veterans that are on the field, especially in the secondary, show up. They showed up all last year, and you could see it all the way into the national championship game. This is a very, very well coached team, and you expect that from a Nick Saban team.”

Not surprisingly, all eyes were focused on Max Browne throughout the two-and-a-half hour, full-pads workout. Named the Trojans’ starting quarterback on Saturday after having been entrenched in a heated competition with Sam Darnold since last spring, he had a very solid day on Tuesday. With crowd noise piped in at times, he looked particularly sharp during an early 7-on-7 period, as well as a late 11-on-11 period in which he hit Tyler Petite down the sideline for a 35-yard touchdown.

While the fact that he earned the starting job is obviously huge for the redshirt-junior, Browne said that for the most part, it was business as usual once he got out on the field on Tuesday.

“I felt like I did real well,” Browne said. “I had a few big-time throws down there towards the end to finish practice, and then executed well in 7-on. Leading the guys with the noise was a little different, which is great. It’s what we need. But to be really honest it wasn’t really this totally different feeling, or this totally different atmosphere. It was like, ‘alright, next step. Let’s go,’ which is probably a great thing, knowing that I’m ready to go.”

Still, Browne did admit that some weight was certainly lifted from his shoulders once he learned that the starting job was his.

“Emotionally I felt like I’d played an entire season, to be honest, with the competition,” Browne said. “So, it was nice to kind of take a deep breath. I reached out to a bunch of people back home, which was awesome, and then yesterday it was full-tilt.”

Having earned the respect of his teammates and coaches for the long, hard-fought road that he took to become the starter, Browne believes that he’s more than ready for the challenge in front of him.

“I’ve had my fair share of falling up short, and then coming back and battling back, which I think is a great life lesson, and it will serve us well this season because it’s not going to go perfect, and the ability to respond and lead these guys is huge,” Browne said. “I’ve been here almost four years since the time I got on campus, so I have a good relationship with all the guys on the team, which I think is crucial as far as leading these guys and getting these guys ready for Week 1.”

– With the team now preparing for Alabama, the offense wore white jerseys for the first time this month. The team will be wearing their white road uniforms in the Sept. 3 matchup. The defense wore cardinal jerseys.

– The No. 1 offense and No. 1 defense also went up against scout teams for the first time.

– Among the players who spent time on the service team were Cary Angeline, Oluwole Betiku, Jacob Daniel, Matt Fink, Roy Hemsley, John Houston Jr., Josh Imatorbhebhe, Clayton Johnston, Velus Jones, Frank Martin, Connor Murphy, C.J. Pollard, Trevon Sidney, Nathan Smith, Tyler Vaughns and Keyshawn Young. Not all of those players lined up exclusively with the scout team, however. Both Smith and Johnston, for example, took some reps with the No. 2 offense at tackle as well.

– Among those who did not participate in practice were Jamel Cook (foot), John Plattenburg (concussion) and Chad Wheeler (plantar fasciitis).

– Wheeler is not walking with a boot anymore, and Helton said that he worked with Strength and Conditioning Coach Ivan Lewis on Tuesday.

“We’re hoping for him to get some work on Thursday, Friday, Saturday, and then hopefully be ready for next week,” Helton said.

– Marvell Tell (hamstring) took part in some early drills, but he was working with a trainer on the side a little later.

– With Wheeler sidelined Chuma Edoga continued to run with the No. 1 offense at left tackle.

– Chris Brown spent the vast majority of the day at left guard with the No. 1 offense, although Damien Mama took some limited reps there as well.

– When the defense went to a nickel alignment, Matt Lopes came in at safety, and Rasheem Green came out.

– Noah Jefferson took part in a good portion of practice, taking some reps with the No. 1 group.

– Inside linebackers Olajuwon Tucker (MIKE) and Osa Masina (WILL) went with the No. 2 defense for most of the day.

– Freshman Jordan Iosefa spent time at MIKE linebacker, as well as at SAM linebacker on the outside.

– The likely play of the day was made by Josh Imatorbhebhe while playing for the service team against the No. 1 defense. Matt Fink threw a deep pass down the sideline, with the freshman leaping over Iman Marshall to make the catch.

– JuJu Smith-Schuster had a couple really nice reps against Adoree’ Jackson during an early one-on-one period. On the first rep, Jackson did a nice job of jamming Smith-Schuster at the line on a quick pass outside, with the talented corner even appearing to tip the ball – but Smith-Schuster reached up and snagged the ball away for a reception. On the second rep Smith-Schuster beat Jackson deep, with Browne placing a perfect deep throw in his hands.

– Also during the one-on-one period E.J. Price and Don Hill go into a scuffle that had to be broken up.

– During a field goal period Matt Boermeester connected on 4-of-5 attempts with a long of 40 yards. Iman Marshall blocked the lone attempt that he did not convert. Reid Budrovich was 3-for-3 during the same period.

– Helton said that the players will decide who the team captains are at the end of this week. They will then be announced next week.

– While Jackson has yet to take any reps on offense this month, Helton said that he will still see time on that side of the ball this season, but on a much more limited basis than he has been in the past.

– NFL scouts from the Miami Dolphins and Tennessee Titans were also on hand.

– Browne hit Taylor McNamara outside for a gain of 7 or 8 yards.

– Browne hit Darreus Rogers with a pass over the middle, but Marshall got his hand in to pop it out – incomplete pass.

– Browne hit Isaac Whitney outside for close to 10 yards.

– Browne hit McNamara over the middle for 10 yards.

– Darnold hit Deontay Burnett over the middle for a gain of 8 or 9 yards.

– Darnold tried to hit Pittman outside, bit Osa Masina got a hand up and broke it up.

– Darnold hit Trevon Sidney over the middle for 7 or 8 yards.

– Brown hit Mitchell outside for a gain of over 10 yards.

– Browne hit Burnett outside for a gain of 11 or 12 yards before Ykili Ross made the stop.

– Browne hit Dominic Davis outside for a gain of around 10 yards.

– Browne hit Taylor McNamara outside for a gain of 10 yards or so.

– Browne hit Justin Davis who followed a block by Zach Banner for a big gain.

– Browne hit Tyler Petite down the sideline for a 35-yard TD.

– Darnold’s pass down the middle was broken up by Smith.

– Browne hit Whitney over the middle for a gain of 7 yards.

– Browne hit Mitchell down the middle for a gain of close to 20 yards.

– Michael Pittman made a sliding 34-yard grab at the goal line on a pass from Darnold.

– Darnold hit Velus Jones outside for a 10-yard gain.