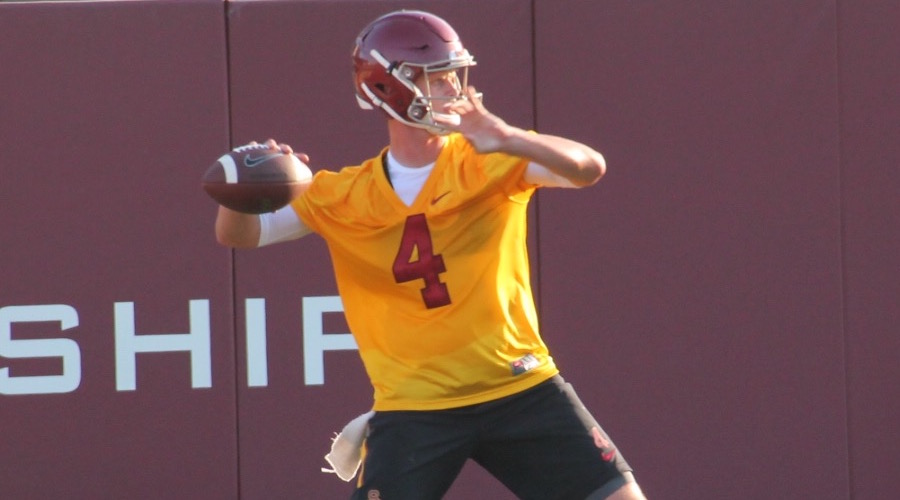 One day after taking part in a 75-play scrimmage in the Coliseum that drew mixed reviews from Clay Helton, the Trojans responded with a much crisper showing on Tuesday on Brian Kennedy-Howard Jones Field.

“I really like the mindset that they came out with today,” Helton said. “They knew that we need to be a better team when you’re playing against an Alabama, a Stanford, a Pac-12 schedule, a Utah State…so, they came out here with a business-like attitude which I really appreciated.”

Reflecting that bounce-back attitude was redshirt-junior quarterback Max Browne, who struggled early in Monday’s scrimmage before finishing strong. Picking up where he left off, he came back on Tuesday and put together a very solid showing, appearing poised and in command as he connected with a number of receivers all over the field, including Jalen Greene, who pulled down a picture-perfect 27-yard touchdown pass from Browne during the final 11-on-11 period.

“He did it again today – he came back and had a really solid day,” Helton said. “That’s what experienced quarterbacks do, and I want him to put a string of those together as we go through the week.”

Of course, Browne’s competition in the highly publicized quarterback battle, redshirt-freshman Sam Darnold, certainly didn’t appear to do anything to hurt his chances either, as he continued to make plays with his arm as well as his feet.

With plans to announce USC’s starter this coming Sunday, the one thing that is apparent is that Helton has an extremely tough decision ahead of himself.

“It’s one of those things where you stay up late at night and I’m watching film, I’m going back through each and every practice, each and every drill, each and every live team work, and really seeing where these guys are,” Helton said. “I’m adding up the numbers, from completion ratios in 7-on-7s and teams, touchdown-to-interception ratios, really so we can make an educated decision, and really make the right decision for our football team.”

Having been sidelined throughout fall camp with a bad back, sophomore defensive lineman Noah Jefferson dressed out on Tuesday, and for the first time this month he took part in individual drills with his teammates.

“I asked him a little way through it, and he said, ‘Coach, I feel good.’” Helton said. “We’ll see with the soreness. You know, anytime you get back into football movements, there’s usually some soreness that comes out of that. We’ll see where it’s at, let the doctors see what we have to do next, but we’re really hoping to transition him into just a couple plays in team as we go through the week.”

Jefferson saw action in all 14 games for the Trojans in his freshman season, and with 6-foot-6, 315-pound size, it’s safe to say that he would be a welcomed addition to a defensive line unit that could still use more depth.

“Everybody that we can get on that defensive front helps,” Helton said. “Whether it was Stevie [Tu’ikolovatu] coming aboard, Khaliel [Rodgers] coming over – you saw what they did. Now you’ve got Noah Jefferson healthy. He’s a guy that’s played football here, and he’s played it at a high level. He’s a very talented young man, so when healthy, he can be a factor.”

– The team practiced in shorts, shoulder pads and helmets on Tuesday.

– Outside linebacker Jabari Ruffin also missed practice after undergoing an MRI on his knee.

– Taylor McNamara went to the sideline late due to a shoulder subluxation, but Helton said it is not serious.

– On Wheeler, Helton revealed that the big offensive tackle received a PRP injection recently for the plantar fasciitis that he is dealing with, and that he will be re-evaluated on Tuesday. He went on to say that he believes that it is something that will require monitoring throughout the season.

– Helton said that with Wheeler sidelined, the coaching staff has discussed the possibility of moving guards Chris Brown and Jordan Simmons out to tackle.

– On Tuesday Chuma Edoga lined up with the No. 1 offense at left tackle, while Zach Banner remained at right tackle – the reverse of where the two have been lining up throughout camp with Wheeler sidelined.

– The defense also lined up in a nickel set frequently in which Smith went to the sideline, with Matt Lopes coming in to line up at safety, with McQuay covering the slot.

“You’ve seen it back-to-back days, a guy that’s really acting like a pro out here,” Helton said. “He had a little bit of a pulled hamstring early, and hasn’t had a ton of opportunities, but what really sticks out is he’s making the most of his opportunities. He’s been very unselfish. And that’s Jalen Greene.”

– Helton said that amongst the freshmen, Michael Pittman, Tyler Vaughns, Jordan Iosefa and Connor Murphy have made the biggest impression on him over the past few days.

– Adoree’ Jackson made the play of the day on defense, intercepting a deep Matt Fink pass intended for Trevon Sidney.

– During a field goal period Matt Boermeester connected on 1-of-3 attempts, while Reid Budrovich connected on 5-of-6 attempts with a long of 38 yards.

– Darnold hit Tyler Petite over the middle for a gain of around 20 yards.

– Browne hit Daniel Imatorbhebhe over the middle for a gain of close to 10 yards.

– Browne tried to hit D. Imatorbhebhe over the middle, but Hawkins broke up the pass.

– Darnold hit Cary Angeline over the middle for 12 or 13 yards.

– Darnold hit Burnett over the idle for 15 yards.

– Darnold hit Smith-Schuster outside for a gain of close to n10 yards.

– Browne hit Burnett outside for a gain of 10 yards.

– Justin Davis ran for a gain of 5 yards.

– The exchange between Browne and J. Davis was fumbled, with Browne recovering, and Nwosu stopping him for a loss.

– J. Davis made a really nice cutback move before picking up 5 or 6 yards.

– Darnold hit Greene over the middle for a gain of close to 15 yards.

– Darnold picked up 8 or 9 yards on the ground.

– Darnold hit Mitchell outside for a gain of 9 or 10 yards.

– Darnold hit Burnett outside for 7 or 8 yards.

– Browne hit Velus Jones over the middle for a gain of around 15 yards.

– Browne hit Daniel Imatorbhebhe over the middle for 7 or 8 yards.

– Browne hit Pittman down the sideline for a gain of over 30 yards.

– Browne hit Greene over the middle for a gain of 10 yards.

– Browne tried to hit Burnett over the middle, but McQuay broke the pass up.

– Darnold hit Isaac Whitney outside for a gain of 25 yards.

– Darnold hit Pittman outside for a gain of 10 yards.

– Darnold hit D. Imatorbhebhe over the middle for a gain of close to 20 yards.

– Browne hit Pittman outside for a 27-yard TD.

– Browne hit De’Quan Hampton outside, but Kevin Carrasco stripped it from him.

– Browne hit Rogers outside for a gain of 6 or 7 yards.

– Matt Fink went deep to Sidney, but Jackson made the interception along the sideline.