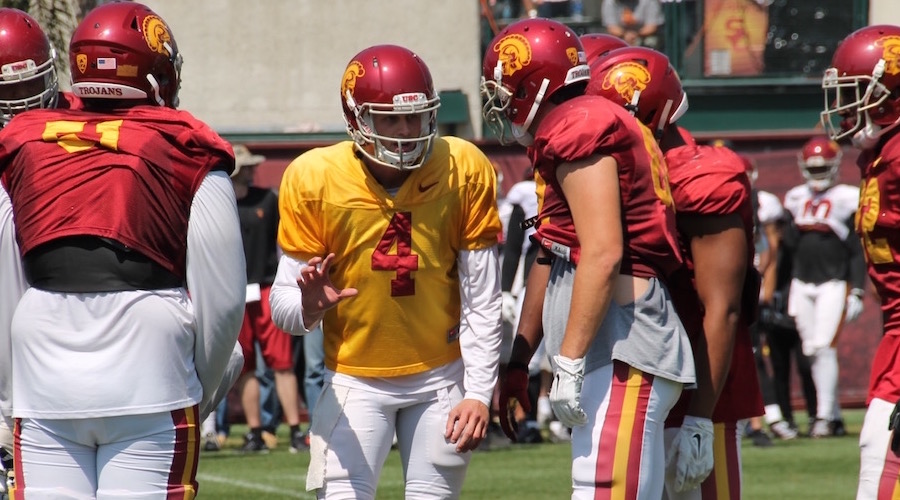 Wearing shorts, shoulder pads and helmets, the Trojans took part in spring practice No. 13 on Tuesday, and stealing the show on this day was the USC tight end corps.

Taylor McNamara made the highlight play of the early portion of practice, hauling in a 40-yard touchdown pass from Jalen Greene in the first 11-on-11 period, but both Daniel Imatorbhebhe and Tyler Petite shined as well. Imatorbhebhe caught a pass from Max Browne for a gain of over 20 yards during that same initial period, before later making a 10-yard touchdown grab when the team was getting some 7-on-7 work in. Petite’s day, meanwhile, was highlighted by a nifty 15-yard touchdown grab in the end zone that came on a Sam Darnold pass that was initially tipped by linebacker Olajuwon Tucker.

While Tuesday’s performance by the talented trio was easily their most impressive, the tight ends have seen a larger number of passes, in general, come their way this spring in comparison to recent years — and it hasn’t been by accident.

USC head coach Clay Helton explained that offensive coordinator Tee Martin and quarterback coach Tyson Helton sat down before spring ball began and made it a priority to feature the tight ends more – a philosophy Helton brought over from his last stop, Western Kentucky.

“Tee and Tyson I thought really sat down and did a great job of doing the installation, and putting the tight end as a center piece of not only the outside receivers, but that matchup with that big body,” Helton said. “I thought it was evident today. I thought Daniel made a couple big plays down the middle of the field – two explosion plays there in team run. So, it’s good to see those guys show up. It’s one of those things, if you’re doubling up on the receivers on the outside, your tight end has got to win down the middle – it’s their time. And I think they’re doing a really nice job of that, and it’s really progressed through camp, and I thought today was definitely the best day for them.”

The development of the tight end position at USC this spring has taken place, in large part, due to the fact that in McNamara, Petite and Imatorbhebhe, the Trojans have three reliable targets with unique receiving skills.

“These guys remind me of the Jordan Camerons that were here, the Rhett Ellisons,” Helton said. “They do a very, very nice job in the passing game, and all three, if you look at them, were kind of flex tight ends or big flex receivers in high school that have now come back to that tight end position. Now they’re 240-245 pounds – 250 – and really doing a nice job of being a mismatch against a linebacker or safety.”

Helton eager to watch Browne and Darnold in spring game

The quarterback battle continued on Tuesday with both Max Browne and Sam Darnold enjoying solid days.

Browne continued to lead the No. 1 offense for the vast majority of practice, with Helton, once again, praising his poise and game management skills.

Darnold, who has come on over the last two weeks, took just one series of snaps with the first-team offensive unit, but he appeared to make the most of them. He threw a perfect deep ball that was ultimately dropped by JuJu Smith-Schuster on his first rep, before connecting with Deontay Burnett and Petite on consecutive plays, and then picking up seven or eight yards on the ground on a run.

In terms of naming a starter, Darnold’s play as of late has only made the decision-making process harder for Helton, who has previously stated that he will not pick a winner this spring unless there is a sizable gap between the leader and everyone else.

Following practice, Helton maintained that line of thinking, stating that he wants to see how the two quarterbacks perform in the upcoming spring game this Saturday before he decides if he will name a starter, or let the competition rage on into fall camp.

“I’m going to let it go through the spring game and then make a decision,” Helton said. “I’ll just be honest, I don’t think there’s a huge gap between the quarterbacks right now. Max definitely shows the game management and the poise that we want. He made some great decisions today. If I had to choose today it would probably go on through [fall] camp. I promise you I’m going to have a decision before that first game. We’re not playing two quarterbacks. But I want to take it through the spring game and that atmosphere – see how the guys react to that presence of being on T.V., and having fans around. That’ll be, really, our first time to have that for those kids. And we’ll see how they react, and then make a good decision from there.”

– Among those who did not practice due to injury were John Plattenburg (ankle), Jonathan Lockett (concussion) and Clayton Johnston (concussion).

– Safety Chris Hawkins, who has missed the entire spring while recovering from offseason ankle surgery, was running sprints off to the side during practice.

– Ajene Harris continued to run exclusively at cornerback. He was with the No. 2 defense for most of the day, but he did take some reps with the No. 1 group late in practice. Harris also blocked a Matt Boermeester field goal attempt.

– Safety Leon McQuay III, who normally has class on Tuesdays, participated in the entirety of practice, running with the No. 1 defense.

– Viane Talamaivao ran with the No. 1 offense at right guard, with Damien Mama lining up at left guard. The two players have been splitting time with Jordan Simmons (right guard) and Chris Brown (left guard) throughout the spring.

And despite the fact that Talamaivao and Mama have an impressive 36 starts between them, following practice, Helton indicated that they are very much involved in a position battle that is still up in the air.

“Every day [Offensive Line Coach Neil Callaway] has got them changing, seeing how they’re reacting with the ones, seeing how they react when they go with the twos, and it’s been a great battle,” Helton said. “I think it’s going to be one that carries through training camp, and the one who is playing the best going into Alabama will start.”

– Safety Marvell Tell had the hit of the day during a 7-on-7 period, drilling Darreus Rogers over the middle of the field shortly after a pass hit his hands, causing him to drop the ball. Tell also compiled a sack later in the day.

– Instead of a final five-play challenge, Matt Boermeester attempted a 40-yard field goal. He missed it, so the entire team had to take a lap.

– With the spring game coming up on Saturday, Helton said the team will practice in shorts on Thursday, with the coaching staff showing the team how they want the off-season player-only workouts to be run.

– Browne hit D. Imatorbhebhe over the middle for a gain of over 20 yards.

– Browne hit Steven Mitchell Jr. over the middle for a gain of 7 or 8 yards.

– Darnold hit Deontay Burnett outside for a gain of 15 yards.

– Darnold scrambled and picked up maybe one yard before Osa Masina made the stop.

– Matt Fink hit Burnett outside for a gain of close to 20 yards.

– Justin Davis ran outside for a gain of 7 or 8 yards.

– Smith-Schuster made a nice diving 10-yard catch near the sideline on a pass from Browne.

– Browne hit Darreus Rogers for a gain of 8 or 9 yards.

– Ronald Jones II ran for a short gain before Christian Rector made the stop.

– Browne tried to hit Burnett over the middle, but Quinton Powell broke up the pass.

– Browne hit Smith-Schuster outside for a gain of 10 yards.

– Darnold hit D. Imatorbhebhe over the middle for a gain of 6 or 7 yards.

– Darnold hit Jake Russell outside for a gain to close to 15 yards.

– Darnold hit Jones outside for a gain of close to 10 yards.

– Darnold hit McNamara for a gain of 5 yards.

– Dominic Davis hauled in a quick pass outside from Browne, but Masina smothered him for a loss.

– Greene hit Petite over the middle for a 15-yard TD.

– Browne hit Rogers outside for a gain of 9 or 10 yards before Matt Lopes made the stop.

– Darnold hit Jones outside with a quick pass, and Jones put a nice juke on Harris and picked up 20 yards before Deion Hart made the stop.

– Darnold hit Ware outside for a gain of around 15 yards.

– Darnold hit D. Imatorbhebhe for a gain of close to 20 yards.

– Browne hit Rogers outside for a gain of 7 or 8 yards.

– Browne hit Smith-Schuster outside for a gain of 10 yards.

– Greene hit McNamara outside for a gain of around 10 yards.

– Darnold throws an on-target pass to Smith-Schuster deep, but he dropped it.

– Darnold hit Burnett over the middle for 8 or 9 yards.

– Darnold hit Petite over the middle for 7 yards before Marshall made the stop.

– Jones made a nice cut at the line and ran outside for a big gain of around 40 yards.

– D. Davis made a nice cut of his own outside and picked up 20 yards.