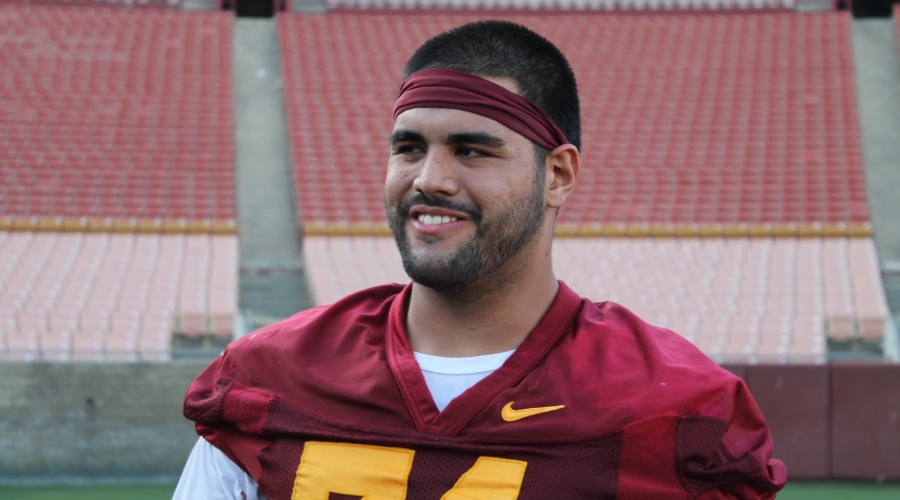 Following a string of spring workouts marked by physical play, the Trojans came out on Tuesday in the Coliseum and took part in a lighter practice session in shorts and helmets. Despite the lack of contact, the team still got plenty of work in, and save for an early dance-off that had the team hooting and hollering in high spirits, they were all business.

“Just to break up the monotony and have a little fun with these guys,” Sarkisian said of the surprise dance session. “We weren’t in pads. That’s normally our competition period where we do a lot of one-on-one work, so we allowed each position group to send a representative to dance. Obviously some guys were a lot better than others, but it was fun for the guys.”

“A man that size that can dance like that, that was pretty impressive,” Sarkisian said.

But it wasn’t all fun and games. The team quickly refocused their attention and put together a strong workout that featured what was likely the best performance of the spring by the USC passing offense so far.

The USC wide receivers were the definite stars of the session. Highlights included a deep touchdown bomb from Max Browne to Harris, and on the play of the day, Steven Mitchell took a quick pass outside from Kessler, then made a quick cutback and darted off for a 70-yard touchdown.

“That’s what we’ve been seeing all of spring camp progressively,” Sarkisian said. “Steven has had a really nice spring. I think, quite honestly, he’s been motivating Ajene. Ajene had a great practice today as well. But Steven has been explosive with the ball in his hands, and that’s what that position in our offense needs to be.”

Sarkisian praised the play of a number of players who, through hard work, have started to emerge this spring. Mitchell, Harris and Nico Falah were cited as examples, but perhaps Sarkisian’s strongest statement came when discussing Browne.

The third-year sophomore backup signal-caller has shown steady improvement throughout his time at USC, and he’s certainly caught the attention of his head coach with his play in recent days.

“Max Browne is playing lights out right now for us,” Sarkisian said. “I would have not a problem if Cody went down and Max had to step in the game. I think Max would do great. I don’t know if I could say the same thing a year ago at this time.”

– Adoree’ Jackson spent the day on defense, starting at the cornerback spot opposite Kevon Seymour. Chris Hawkins and John Plattenburg were the two primary safeties with the No. 1 defense, but Leon McQuay III was also in there during nickel situations – which the Trojans spent quite a bit of time in on defense on Tuesday. In those instances McQuay and Hawkins lined up at the two safety spots, with Plattenburg moving down to nickelback.

– On defense, Linebacker Su’a Cravens was very active, and he too was lauded by Sarkisian following practice.

– Olajuwon Tucker continued to line up with the No. 1 defense at will linebacker.

– Second-team center Khaliel Rodgers went to the sideline early and remained there for the entirety of practice with ice on his shoulder. With him out, Toa Lobendahn took reps at center with the No. 2 offense, and Nico Falah lined up with the No. 1 offense at left tackle.

– Freshman offensive tackle Chuma Edoga returned to practice after missing this past Saturday’s workout with an ankle injury.

– The offense swept the defense in the final five-play challenge as Kessler completed three consecutive passes – two to Mitchell, and the final one to Rogers.

– USC athletic director Pat Haden was also on hand. Earlier in the day Haden issued a statement noting that, in honor if his gay son, he will not be attending the College Football Playoff committee meeting in Indianapolis this week. Following practice Sarkisian said that he supports Haden’s decision.

“In my opinion, we’re at the most diverse university in America, and we’re, in my opinion, in the most diverse city in America, and if we can embrace that diversity and be able to voice our opinion with the stage that we have, we should,” Sarkisian said. “I support Pat in every step of the way. We met with the team on it today. I think it was a good statement for us to learn about. We’ve had issues this spring, nationally, that have allowed us as a team to grow.”

– Kessler connected with Mitchell outside for a gain of around 12 yards.

– Damien Mama and Toa Lobendahn created a big hole for Justin Davis to run through, and the junior tailback picked up close to 10 yards.

– Browne connected with a wide-open Connor Spears down the middle for a gain of 50-plus yards before Lamont Simmons tracked him down.

– Aaron Minor made a diving 15-yard grab on a pass from Browne.

– Kessler hit Smith outside for a gain of close to 15 yards.

– Rogers made a really nice tip-toe catch along the sideline for a gain of 20 yards on a pass by Kessler.

– Browne rolled out and found Harris for a 10-yard touchdown.

– Kessler hit Smith over the middle for a 10-yard gain.

– Kessler connected Smith for a 20-yard gain outside.

– Kessler tried to hit Smith outside, but Kevon Seymour broke the pass up.

– Soma Vainuku made a nice grab on a pass outside from Browne, but Quinton Powell came up and limited the play to a short gain.

– Browne hit Tober over the middle for a gain of close to 20 yards.

– Simmons tackles Davis for a loss.

– Kessler hit Whitney over the middle for a gain of close to 15 yards with Seymour in coverage.

– Browne threw outside to Mitchell, but Plattenburg broke the pass up.

– Town completed a pass over the middle to Robby Kolanz for a gain of around 15 yards.

– Kessler connected with Mitchell for 15 yards.

– Kessler hit Mitchell for a gain of 10 yards.

– Kessler hit Rogers over the middle.