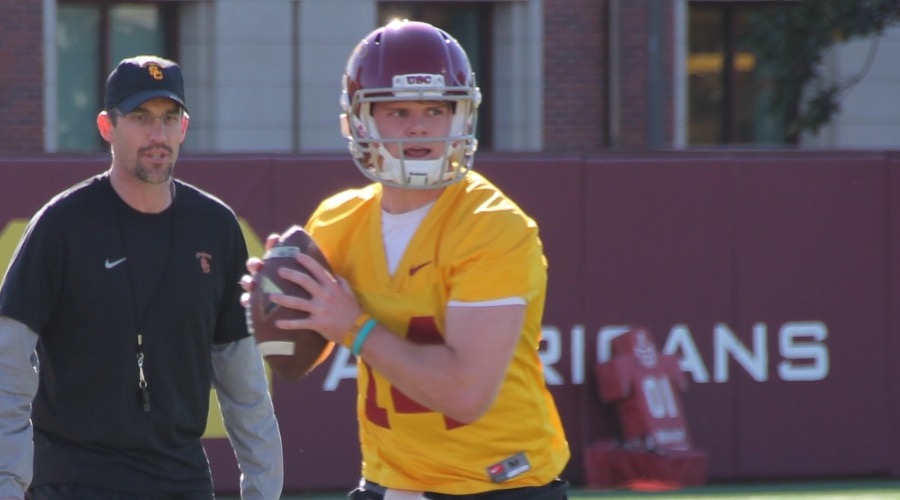 The Trojans went back to work on Tuesday for Day 7 of spring practice, which meant that the highly publicized quarterback competition picked back up again, and for the second consecutive session, it was redshirt-freshman Sam Darnold who had the most productive day.

Locked in a battle with Max Browne – declared the leader of the competition by Clay Helton late last week – as well as Jalen Greene and Matt Fink, Darnold was extremely sharp throughout the two-hour session on Tuesday while running with the No. 2 offense. He was especially impressive during the 7-on-7 and 11-on-11 periods, when he showed off a strong arm as well as outstanding presence in the pocket, delivering dart-after-dart to his receivers.

“Sam Darnold, I thought, had his best day today,” Helton said. “I thought he was efficient and accurate. I’m looking forward to seeing his numbers today, but I wouldn’t bet anything it wasn’t over 70 percent completion ratio. I thought he played very fluid and timely. The ball came out quick. I’d seen in some early practices a lot of holding onto the ball to make sure [the receiver] was open. Now, the ball seems to be spitting out, and usually that means there’s a lack of confusion. Confusion creates hesitation, and hesitation at the quarterback position will get you beat.”

Browne had a solid day, overall, in his own right, and he also came up with the arguable play of the day – a 40-yard touchdown strike to Josh Imatorbhebhe. In a two-minute drill to close practice, however, he led the offense down the field, only for the drive to stall in the red zone as he threw four consecutive incomplete passes.

After reviewing film from Saturday’s scrimmage in the Coliseum, Helton lauded senior tailback Justin Davis for his performance, which included a weaving 25-yard touchdown to end the session.

“I really, really came away very, very impressed with Justin Davis from the scrimmage, and how he did.” Helton said. “I thought he ran extremely violently.”

Davis’ strong play carried over into Tuesday’s workout, with the veteran leader continuing to find success rushing the ball, while also catching a number of passes out of the backfield. It’s Davis’ growth as a pass-catcher that has really caught the attention of Helton.

“If everybody remembers when he first got here, it was life or death with him catching the ball,” Helton said. “It could go off his face, it could go off his chest, and he has improved so much in that area. And I even told him today, I asked him, ‘hey Justin, how many balls did Buck Allen catch his [last] year?’ Well, he caught over 40. And if you truly want to be a professional player in today’s time, you have to catch the ball out of the backfield, and he’s worked so hard to do that.”

– Linebacker Uchenna Nwosu did not practice due to a sprained MCL that he suffered during Saturday’s scrimmage. He is, however, expected to return to action as soon as Thursday or Saturday.

– Others who did not participate were Noah Jefferson (back), John Plattenburg (ankle), Ykili Ross (shoulder) and Clayton Johnston.

– Running back Ronald Jones II went to the sideline early due to illness and did not return to action.

– Defensive lineman Jacob Daniel limped off the field late with an ankle injury.

– Tight end Taylor McNamara returned in a limited capacity on Tuesday, but he appeared to hurt his shoulder again near the end of practice.

– Tight end Tyler Petite (concussion) returned to full-time action, and he was singled out by Helton as one of the standout performers of the day.

– Linebacker Osa Masina (hamstring) returned to work in a limited capacity. He did not participate in 11-on-11 drills, but he did take part in individual and 7-on-7 drills.

– Viane Talamaivao and Damien Mama were back with the No. 1 unit on Tuesday, with Talamaivao at his normal right guard spot, and Mama at left guard.

– Jabari Ruffin took Nwosu’s spot with the No. 1 defense at SAM linebacker.

– Leon McQuay III did not participate in practice due to class. Marvell Tell and Matt Lopes were the two starting safeties.

– The No. 1 defense was in the nickel for a good chunk of the early portion of practice. Rasheem Green and Malik Dorton were the two interior defensive linemen in those situations. Jonathan Lockett came in as the nickelback.

– After spending the first two weeks at cornerback, early-entrant freshman C.J. Pollard was at safety on Tuesday, going with the No. 2 defense.

– Deontay Burnett had arguably the best day of any wide receiver, making a number of catches all over the field. J. Imatorbhebhe also had a big day.

– During a field goal period Matt Boermeester connected on 5 of 7 attempts from 34 yards out, with Lockett getting his hand on one of those.

– Adoree’ Jackson arrived about midway through practice and watched from the sideline.

– J. Davis ran outside for a gain of 7 or 8 yards before Isaiah Langley made the stop.

– Aca’Cedric Ware ran inside for a gain of 5 yards.

– Browne hit J. Imatorbhebhe over the middle for a gain of 10 yards.

– Browne hit J. Imatorbhebhe with a quick pass outside, but Quinton Powell came up in a hurry and limited the play to no-gain.

– Darnold hit Burnett outside, and he blew by a defender to break loose for a big gain.

– Darnold hit Ajene Harris outside for a gain of close to 20 yards.

– Browne tried to connect with J. Imatorbhebhe over the middle, but Pollard broke the pass up.

– Darnold hit Burnett outside for a gain of 15 yards.

– Darnold hit McNamara outside for a gain of 12 or 13 yards before Pollard made the stop.

– Darnold hit J. Imatorbhebhe over the middle for a gain of 20 yards.

– Browne hit Harris over the middle for a gain of 10 yards.

– Browne hit J. imatorbhebhe along the sideline for a 40-yard touchdown.

– Browne hit J. Davis outside for a gain of 5 yards.

– Browne hit J. Davis outside, but Michael Hutchings stopped him after only a short gain.

– Browne hit Burnett over the middle for a gain of 10 yards before Ruffin made the stop.

– Darnold hit De’Quan Hampton outside for a gain of 11 or 12 yards.

– Darnold hit Aca’Cedric ware outside for a gain of 10 yards.

– Darnold connected with Darreus Rogers outside for a gain of 15 yards before Langley made the stop.

– Browne hit Hampton over the middle for a gain of close to 15 yards.

– Darnold hit Petite over the middle for a gain of close to 20 yards.

– Darnold scrambled and broke loose for a gain of around 7 yards before Matt Bayle made the stop.

– Darnold hit Burnett outside for a gain of close to 20 yards before Deion Hart made the stop.

– Browne hit Daniel Imatorbhebhe for a gain of around 25 yards along the sideline.

– Browne’s pass outside to Hampton was incomplete

– Green pressured Browne, and he threw the ball away

– Browne hit Petite over the middle for a 20-yard gain.

– Browne’s pass to Rogers in the corner of the end zone was incomplete.

– Browne’s pass to Harris was incomplete.

– Browne’s pass to Steven Mitchell – with Iman Marshall in coverage – was incomplete.