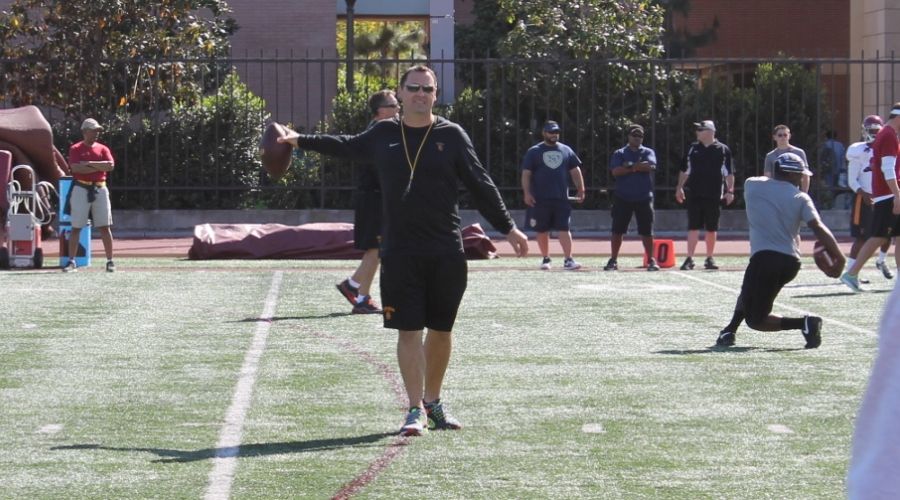 After a one-week break from action, the Trojans started spring practice back up on Tuesday, taking part in a shorts, shoulder pads and helmets workout that had USC head coach Steve Sarkisian in an up-beat mood afterwards.

“First day back coming out of spring break, I thought it was a really competitive practice,” Sarkisian said. “I was impressed with these guys. They went from the very beginning, and it was every period. There was a lot of energy. And the challenge is to recreate that on Thursday, and then again on Saturday and continue to do it over and over and over again, because that’s how you get good.”

No player had a more productive day than redshirt-sophomore wide receiver Steven Mitchell. Now almost two years removed from when he suffered his ACL injury, the Mission Hills (Calif.) Bishop Alemany product has been arguably the top performer at the wide receiver position throughout the spring so far.

That trend continued on Tuesday as Mitchell hauled in a number of passes all over the field, including a one-handed catch over the middle, and some difficult grabs in traffic.

“I thought he had a heck of a practice,” Sarkisian said. “It wasn’t that he had a lot of catches – he did, but it was the types of catches that he made. They were competitive catches with people around him in tight quarters. We really think that he has a chance to become a really special player.”

Appearing to have regained the burst in his step that went missing immediately following his injury, Mitchell is a dynamic athlete who, listed at 5-foot-10, doesn’t necessarily possess the size of a prototypical USC wideout. Still, when pressed, Sarkisian did draw parallels between Mitchell and a pair of Trojans receivers from the past.

“Maybe Ronald Johnson,” Sarkisian said. “Ronald wasn’t the biggest guy, but he was a speed guy. Maybe Damian Williams – he played a little bit that way. But Steven has elite cutting ability and quickness, and the key is to keep getting him the ball in space so he can utilize that.”

Having suffered a toe injury last August that required surgery and forced him to miss the entire 2014 season, tailback Tre Madden has been limited throughout the spring, taking part in warm-ups, individual drills and 7-on-7 periods only.

Running and cutting well, however, the fifth-year senior stated back in Week 1 of the spring that he hoped to participate in contact drills following the team’s one-week break from action. On Tuesday, however, Madden said that the likely plan now is to remain limited throughout the remainder of the spring.

“I probably won’t be doing any of the contact drills,” Madden said. “I’m just trying to get out of the spring healthy and fresh, and then get after it in the fall.”

– In addition to Mitchell, Sarkisian also singled out running back Justin Davis and safety John Plattenburg for their play on Tuesday.

– Olajuwon Tucker lined up with the No. 1 defense at WILL linebacker, ahead of Michael Hutchings. Hutchings went with the No. 2 group.

– After missing the team’s prior workout due to earlier flights back home for spring break, both linebacker Quinton Powell and offensive lineman Khaliel Rodgers were back in action at practice on Tuesday.

– Wide receiver Ajene Harris (hamstring) suited up, but was extremely limited and spent the majority of the practice on the sideline.

– Quarterback Cody Kessler caught everyone’s attention on one play when he scrambled, found plenty of daylight, and darted off for a 30-yard-plus gain.

– The play of the day, however, came when Max Browne found a wide-open Christian Tober along the sideline for a 60-yard-plus touchdown. Tober had another catch for big yardage earlier in the day.

– Kessler hit Mitchell over the middle for a 10-yard gain.

– Kessler connected with JuJu Smith, who had a big collision with Dawson after a pickup of around eight yards.

– Kessler threw a pass over the middle that Mitchell reeled in with one hand before darting off outside for a gain of close to 15 yards.

– Browne connected outside with Christian Tober, who broke outside for a big gain.

– Browne completed a pass out to Isaac Whitney for a gain of close to 10 yards.

– Adoree’ Jackson, lining up at cornerback, made a nice read on a Ricky Town pass outside and narrowly missed making a diving interception.

– Kessler threw a quick pass outside to Smith, but Kevon Seymour came up in a hurry and limited the play to a short gain.

– Kessler tried to connect with Smith over the middle but Seymour broke up the pass.

– Kessler hit Pinner outside for a gain of around 15 yards.

– Kessler connected with Smith for a gain of close to 25 yards before Hawkins pushed him out-of-bounds.

– Jalen Greene threw over the middle, and Cope-Fitzpatrick made a nice diving grab for a gain of 25 yards.

– Greene connected with Mitchell outside for 10 yards.

– Town completed a pass outside to Mitchell for close to 10 yards.

– Browne hit Connor Spears for a gain of close to 10 yards.

– Davis made a nice cut at the line and picked up around eight yards before Plattenburg came up with a big hit.

– Kessler connected with Mitchell over the middle for a gain of around 15 yards.

– Davis with another nice run up the middle for close to 10 yards before Hutchings made the stop.

– Kessler hit Spears for a gain of around 12 yards.

– Cameron Smith and Pelon combined for the sack on Kessler.

– Davis had a tough, physical run for a gain of close to 10 yards.