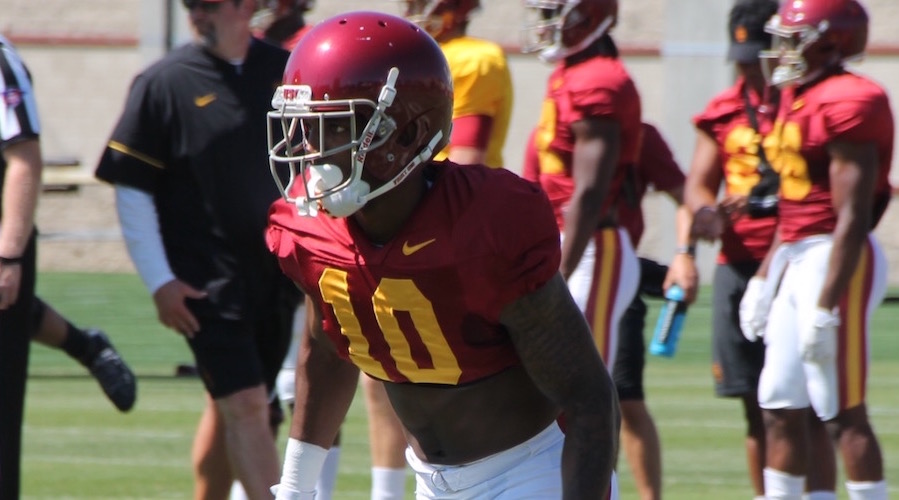 With a Rose Bowl matchup with Penn State coming up on Jan. 2, the Trojans were back out on Brian Kennedy-Howard Jones Field on Tuesday, taking part in what was officially their fifth bowl game workout, but the first that was made open to the media.

USC head coach Clay Helton noted that the team is preparing this week as if they will face Penn State on Saturday. They will do the same next week before taking a four-day break for the holidays, and then they’ll return for one final week of practice that will again mirror that of a typical game-week.

The practice session also featured some extended work for some of the younger players on the team, a number of whom participated in a one-on-one drill after the final 11-on-11 period of the day, with freshman receiver Trevon Sidney bringing the session to dramatic a close with a phenomenal one-handed catch over C.J. Pollard in the end zone.

“This is a great opportunity for kids that are going to have to contribute for us next year, to allow them to have basically an extra spring practice,” Helton said. “And that’s why you saw the extra work on the field after practice today.”

With Max Browne set to transfer and no longer with the team, Helton noted that four players are preparing for the role of backup to Trojans starting quarterback Sam Darnold. They are scholarship players Jalen Greene and Matt Fink, as well as walk-ons Thomas Fitts and Holden Thomas.

Lining up with the No. 2 offense throughout the 11-on-11 and service team periods, however, was Greene and Fink exclusively. And with Fink on pace to redshirt, Helton admitted that Greene, who found a home at receiver this season, has the inside track on the job – although, to no surprise, he’s hoping that the redshirt-sophomore ultimately isn’t pressed into action at the position against the Nittany Lions.

“Obviously if we can make it through the entire game with Sam, we’re going to do that,” Helton said. “If we get in an emergency situation we’ll make that decision. And right now if I had to say who would go in there right now, to be able to save Matt Fink’s redshirt year, I would put Jalen in. But we’re going to prepare for the worst-case scenario and then hope for the best.”

Greene continued to also take reps at wide receiver in practice, and the plan is still for him to contribute there in the game. Should he be called upon to play quarterback, however, Helton said that with Greene having spent his first year-and-a-half on campus at the position, he’s completely confident in his abilities.

“He’s learned the game as a quarterback, so it’s easy to bring him back and to transition him,” Helton said. “It looked like he was riding a bike today. He just made all the calls and everything was smooth, so it was nice to see him back there.”

– Helton began his post-practice media scrum by sending his thoughts and prayers to the family of former Trojans star Joe McKnight, who was laid to rest on Monday.

“Joe will be dearly missed by our entire Trojan Family,” Helton said.

– The team was in full pads on Tuesday.

– Backup center Khaliel Rodgers is under concussion protocol and did not participate in practice.

– Helton said that cornerback Jonathan Lockett will undergo hip surgery on Friday and will miss the bowl game. The hope is to get him back in time for next season.

– Freshman offensive tackle Nathan Smith injured his knee during practice. Helton said that he didn’t know if the injury is serious or not.

– Darnold (hip flexor), Daniel Imatorbhebhe (hamstring) and JuJu Smith-Schuster (wrist sprain) are dealing with minor injuries, but all of them participated in the entirety of practice, and Helton said that none are expected to miss any practice time.

– Fink was picked off twice on Tuesday. Leon McQuay III came up with the first interception on a pass over the middle. Jack Jones came up with the second one, snagging a quick pass outside.

– McQuay had a solid overall day. In addition to the interception, he had a very nice diving pass break-up on a pass thrown by Darnold during a 7-on-7 period, and he also sacked Fink in the final 11-on-11 period.

– Smith-Schuster looked to be moving around better than he has in quite awhile. His day was highlighted by a 35-yard touchdown reception on a pass from Darnold where he jumped up high at the goal line to grab the ball over Jones.

– Ronald Jones II weaved his way for a gain of around 8 yards.

– Darnold hit Smith-Schuster for a gain of 8 or 9 yards.

– Aca’Cedric Ware broke off a gain of around 20 yards.

– Fink tried to run but Porter Gustin stopped him for no gain.

– Fink’s pass over the middle was intercepted by McQuay.

– Darnold hit Deontay Burnett outside for a gain of 10 yards.

– Kevin Scott and others stopped R. Jones for no gain.

– Smith-Schuster jumped up high to pull down a 35-yard TD pass from Darnold over J. Jones.

– Darnold hit Greene outside for 10 yards.

– Fink hit Malepeai outside but Iman Marshall stopped the play for no gain.

– Fink hit Velus Jones over the middle for a gain of around 7 yards.

– Greene hit Taylor McNamara over the middle for a gain of 5 or 6 yards before Pollard put a big hit on him.

– Fink hit Cary Angeline over the middle for a gain of around 15 yards.

– Fink threw outside but J. Jones was there to intercept it.

– Darnold hit D. Imatorbhebhe down the seam for a gain of over 25 yards.

– Darnold hit Adoree’ Jackson who broke free for a big gain thanks to a big block by Chuma Edoga on Yoofi Quansah.

– Darnold hit D. Imatorbhebhe outside for a 35-yard TD.

– Uchenna Nwosu batted down Fink’s pass attempt over the middle.

– Darnold hit Darreus Rogers along the sideline for a gain of around 25 yards.

– Darnold hit Rogers outside for a gain of close to 10 yards.

– Darnold hit Smith-Schuster over the middle, who then broke outside and dove for a touchdown.

– Fink hit Angeline over the middle for a gain of 15 yards.