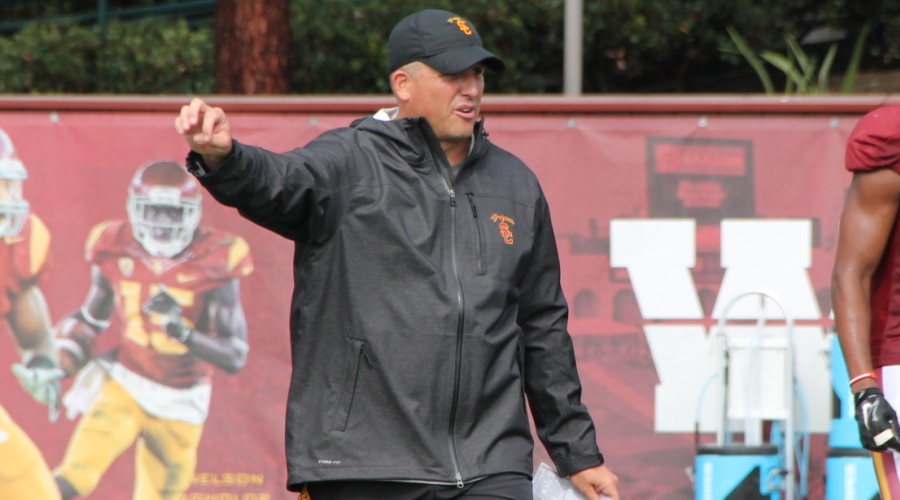 The Trojans were in shorts, shoulder pads and helmets on Tuesday, and with an Arizona (5-4 overall, 2-4 Pac-12)  team coming up on Saturday that features the nation’s No. 11 rushing attack, USC interim head coach Clay Helton said that, with a real battle on tap, he likes the way that his team came out and prepared.

“We’re facing Arizona who I think is one of the premier run/run pass-option teams,” Helton said. “They do a great job of running for about 265 [yards] a game, and then being able to pull the ball and get the ball out in space, or quick-gain throws. They do it as good as anybody in the country. So, we got a lot of work on that today. I thought it was really good. Guys came out here with tremendous energy. It’s another championship game for us.”

Smith-Schuster’s availability up in the air

One day after undergoing surgery in which a metal plate and screw were inserted to secure a broken bone in his right hand, USC sophomore wide receiver JuJu Smith-Schuster arrived near the end of practice with his arm in a sling and watched from the sideline.

As for when the Trojans team leader in receptions (52) and receiving yards (956) might be able to return to action, Helton said there is no clear timetable.

“Everybody heals differently,” Helton said. “Obviously this is one of the elite players in America. We’re going to take care of him as a person, first, and make sure that he’s healthy and ready to go. When he is, he’ll be back out there.”

Helton did indicate, however, that if anyone is capable of making a speedy recovery, it’s Smith-Schuster.

“You’re talking about one of the toughest kids in my 21 years of experience I’ve ever been around,” Helton said. “He’s an absolute warrior, and I know he’ll get back as soon as he can.”

Helton adds a twist to Mondays

Following practice Helton revealed that in the week leading up to USC’s Oct. 17 matchup with Notre Dame he implemented Monday developmental practices for the younger and less experienced members of the team. 45-minute-long sessions that take place while the veterans are inside lifting, he believes that they are already paying off.

“We want to be able to really develop not only the older kids, but it’s our job to develop every kid on the football team,” Helton said. “You look up, and if you can take those Mondays, and you have 13 or 14 weeks of the year, that’s an extra spring practice,” Helton said. “It’s really where the focal attention is on them, which is really neat.

We have a De’Quan Hampton out here, a Deontay Burnett, Uchenna [Nwosu]…and it’s neat to see them start to really blossom as players. We also have our redshirt guys out here like a Cole Smith, Clayton Johnston and Roy Hemsley, and it’s really neat to see their development over the last three weeks, and it’s really paying dividends in games. It was neat to see Uchenna in that last game making the plays he did, and Deontay making the plays he did.”

– Cornerback Jonathan Lockett did not practice due to a groin injury, but he is expected back later this week.

– Defensive lineman Claude Pelon (knee) suited up and took part in some individual drills. He has missed the last three games for the Trojans.

– Defensive lineman Jordan Simmons (knee) also got a little work in. He has been sidelined since fall camp.

– Running back Tre Madden (knee) again had a very light day of work in practice.

– Adoree’ Jackson spent the entire day on defense at cornerback.

– Nico Falah continued to run with the No. 2 offense at center.

– Leon McQuay III blocked a punt during a late field goal period, with Quinton Powell scooping up the ball and returning it for a touchdown.

– Sua’ Cravens intercepted a deep ball near the sideline on a pass thrown by Sam Darnold.

– During an early one-on-one period Deontay Burnett made a fantastic one-handed grab in front of Chris Hawkins. Rogers also had a nice catch along the sideline against Iman Marshall.

– Alex Wood connected on all three of his field goal attempts on Tuesday.

– A large collection of scouts were on hand, including those from the Baltimore Ravens, Buffalo Bills, Green Bay Packers, St. Louis Rams and Tennessee Titans.

– Porter Gustin and others stopped Ronald Jones II after a short gain.

– Cody Kessler hit McNamara for a gain of close to 10 yards over the middle.

– Kessler hit Hampton over the middle for a gain of over 15 yards.

– Kessler tried to connect with jalen Greene outside but Isaiah Langley broke up the pass.

– Kessler hit Robby Kolanz outside for a gain of 20 yards with Langley in coverage.

– Kessler connected with McNamara over the middle for a gain of around 15 yards before Anthony Sarao made the stop.

– Kessler hit McNamara outside for a gain of 10 yards before Jackson made the stop.

– Kessler connected with Hampton for a gain of close to 10 yards before Kevon Seymour made the stop.

– Kessler hit Connor Spears outside for a gain of over 20 yards.

– Kessler hit Rogers over the middle for a gain of 8 or 9 yards.

– Kessler connected with Hampton outside for a gain of 10 yards before Langley made the stop.

– Jones ran outside for a gain of close to 10 yards before jabari Ruffin made the stop.

– Darnold ran for a short gain before Smith made the stop.

– Kessler hit Burnett over the middle for a gain of 25 yards.

– Kessler hit Mitchell for a gain of close to 30 yards before Marshall made the stop.