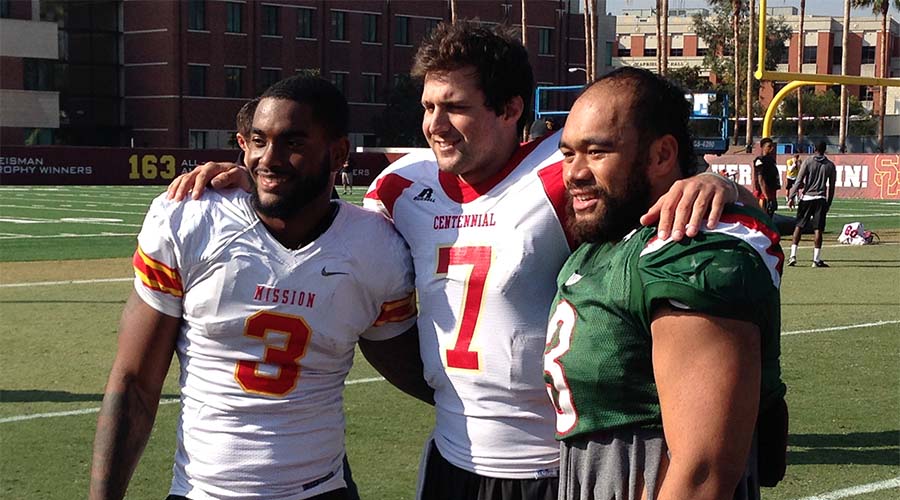 USC suffered a disappointing loss to Oregon this past weekend, but with a matchup with crosstown rival UCLA on tap for this Saturday, with a berth in the Pac-12 title game on the line, the Trojans were focused and in high spirits on Tuesday as they took part in a shorts-and-shoulder pads practice session on Brian Kennedy-Howard Jones Field.

“This is a great team that we’re going to be playing against on Saturday, and for USC and UCLA to go at it for the Pac-12 South, and to make it to the Pac-12 championship, it’s awesome,” said USC sophomore wide receiver JuJu Smith-Schuster following the one-and-a-half hour workout. “We’re going to bring our best game to the table, and they’re going to bring their best game. It’s the battle of L.A.”

For USC interim head coach Clay Helton, this week is also all about the seniors, a handful of whom wore their high school jerseys on Tuesday. A group that was forced to deal with NCAA sanctions during a majority of their time on campus, and that played for four different head coaches, Helton said that they define the term ‘Fight On,’ and that a win on Saturday would mean the world to them.

“We talked about it, what a neat experience it would be for a bunch of seniors who not only have faced adversity this year, but throughout their career,” Helton said. “To walk off the field as a Pac-12 South champion would be something truly special for a Cody Kessler, a Soma Vainuku, a Jaheel Pinner, Antwaun Woods…all those seniors.”

The Trojans received a boost along the offensive line on Tuesday with the return of Viane Talamaivao, who suffered a torn meniscus against Colorado, and missed the Trojans’ matchup with Oregon last weekend.

He took part in the entire practice session, spending the day back with the No. 1 offense at his normal right guard position, and appears poised to go on Saturday.

“He’s a guy that’s had a lot of reps under his belt, and he is getting healthy,” Helton said. “We had him ready for an emergency purpose for us against Oregon, but just didn’t think he was quite ready enough. Chris [Brown] came in and did an adequate job, and that was a valuable experience for him for the future. Obviously, Viane is a guy that’s been a seasoned vet, and we hope that will help us out.”

– Smith-Schuster, who is dealing with hand and ankle injuries, took part in the entire practice session. When asked to put a percentage on his health afterwards, he said, “75 percent…on a good day.”

– Having missed the last four games due to a broken clavicle, freshman safety Marvell Tell made a surprise return to practice on Tuesday, and it looks like he will also play against the Bruins.

“That was like a Christmas present, I’ll be honest with you,” Helton said. “We went into the game last week with two healthy safeties and had to train some corners just in case we went into an emergency. Now we’ve got three safeties, which is great. Marvell felt really good.”

– Others who returned to practice on Tuesday after missing recent time were running back Tre Madden (knee), Christian Tober (clavicle) and Alex Wood (concussion).

– Linebacker John Houston Jr. (back) did not practice. Linebacker Quinton Powell was in attendance, but he also did not participate in practice.

– Freshman wide receiver Deontay Burnett had a very solid showing on Tuesday. He had the play of the day during an early one-on-one period when he made a diving one-handed catch in the end zone despite tight coverage by Chris Hawkins.

– During that same one-on-one period freshman cornerback Iman Marshall made a nice play of his own, picking off a Cody Kessler pass directed for Jalen Greene along the sideline.

– Nico Falah took a number of reps late in practice with the No. 1 offense at center.

– Class of 2016 wide receiver Josh Imatorbhebhe (Suwanee, Ga./North Gwinnett), who has signed a financial-aid agreement with USC, was in attendance.

– Kessler tried to hit Smith-Schuster over the middle, but Kevon Seymour was there to break up the pass.

– Ronald Jones II ran outside and showed off his speed, picking up around 15 to 20 yards.

– Kessler hit Smith-Schuster over the middle for a gain of close to 20 yards.

– Vainuku ran hard up the middle for a gain of five yards before Michael Hutchings made the stop.

– Max Browne connected with Burnett over the middle for a gain of around 35 yards.

– Browne hit Tyler Petite over the middle for a gain of 10 yards.

– Browne hit Burnett outside for a gain of around 10 yards.

– Kessler hit De’Quan Hampton outside for a gain of close to 20 yards with Seymour in coverage.

– Kessler hit Steven Mitchell Jr. outside for a gain of 15 yards.

– Jones ran for a gain of 7 or 8 yards before Joel Foy made the stop.

– Kessler connected with Taylor McNamara along the sideline for a gain of 10 yards.

– Kessler hit Hampton over the middle for a gain of 11 or 12 yards.

– Browne hit Tober outside for a gain of 10 yards.

– Kessler hit Darreus Rogers outside for a gain of 20 yards.

– Browne hit Caleb Wilson over the middle for a gain of close to 25 yards.