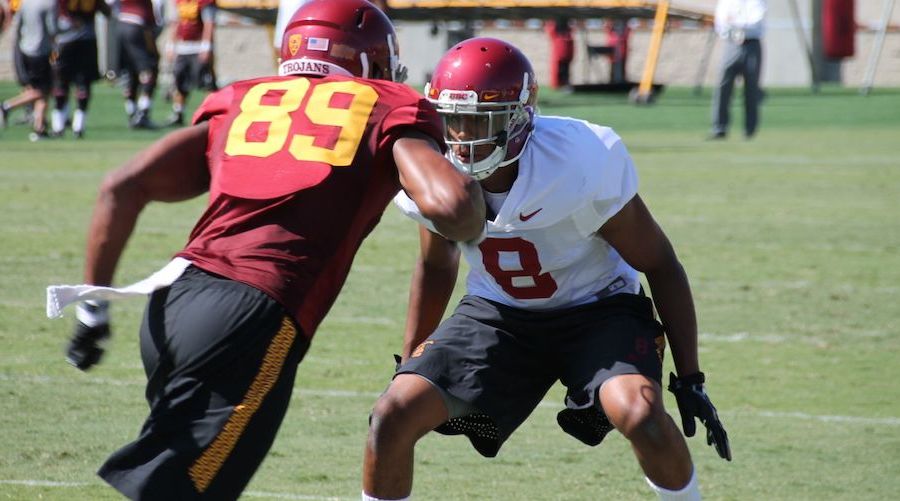 Gearing up for Friday night’s matchup at Colorado, the Trojans were back at work on Tuesday morning in shorts and shoulder pads. With an emphasis placed on third-down situations, both sides of the ball had their moments, but it was the defense that really shined from the get-go, particularly in the initial 11-on-11 period as the secondary came out on fire.

Cornerbacks Adoree’ Jackson, Kevon Seymour and Iman Marshall all made highlight-reel pass break-ups, with linebacker Uchenna Nwosu making a diving interception off of one of Marshall’s deflections for the arguable play of the day.

Up front, the Trojans defensive line impressed in that same period, with Greg Townsend Jr. and Noah Jefferson compiling sacks.

USC interim head coach Clay Helton is undoubtedly hoping that the Trojans defense gets off to a fast start on Friday night as well when the unit faces a quarterback in Colorado junior Sefo Liufau whom he believes presents a serious challenge.

“We’re playing a quarterback that I think is very, very talented at Colorado, that I think has really progressed,” Helton said. “He has the ability to create on third down with his legs. He’s a big kid, very strong, and we’ve got to do a great job of keeping him in the pocket with our pass-rush, so that’s what we really focused on today. And then, defensively, getting off on third-downs, and offensively, trying to do what we did last week – staying on third downs.”

USC’s leading receiver, JuJu Smith-Shuster, went through some early individual drills on Tuesday, but was limited for the most part and only caught a couple passes.

Helton said that Smith-Schuster is following a similar schedule to last week, when he rested his hand until the day before USC’s victory over Arizona – a game in which he made eight catches for 138 yards and one touchdown.

“We’ll start to get him some catches tomorrow, but we just want to protect that [hand],” Helton said. “I think by next week he’ll be able to do even more, but we waited all the way until Friday last week. Tomorrow he’ll start to do some things, so he’s progressing, which is nice to see.”

Madden gets more work in

Dealing with a sore knee, USC tailback Tre Madden has practiced sparingly in recent weeks, but he got a solid day of work in on Tuesday, taking a number of reps with the first-team offense against the service team defense.

Having shined against Cal two weeks ago, only to spend most of the night on the sideline against Arizona, Helton said that he will meet with the fifth-year senior this week to gauge the status of his health, and to come up with a specific role for him based on that discussion.

“I think there are some things that Tre, even dinged, brings us some advantages in some places,” Helton said. “I think in third-and-short situations. I think in goal-line situations. We know how great a runner he is in those situations, and in pass-protection on third downs. So, I’m going to sit down with him probably tomorrow and see exactly where he’s at health-wise, and kind of lean on him to see what type of role he will have in this game.”

– After having been limited on Monday, starting ‘mike’ linebacker Cameron Smith (shoulder) was a full participant on Tuesday, and Helton said that he will play on Friday.

– Defensive lineman Claude Pelon, who has battled knee and ankle issues this season, was carted off the field at the end of practice with an undisclosed injury.

– Cornerback Jonathan Lockett participated in the entire practice session for the second consecutive day after missing the Trojans’ matchup with Arizona due to a groin injury.

– Safety Leon McQuay III, who was also sidelined last weekend, got more work in on Tuesday than he did one day prior, but he was still limited. As to whether or not he will play on Friday, Helton said, “It’ll be pretty close.”

– Near the tail-end of practice starting center Khaliel Rodgers aggravated a shoulder injury that Helton said he’s been dealing with, but the Trojans interim head coach added that he will be ready for the game on Friday.

– Linebacker John Houston Jr. (back) did not practice.

– Greg Townsend Jr. took the bulk of the reps with the No. 1 defense at defensive end on Tuesday, although Rasheem Green continued to take some there as well.

– Wide receiver Ajene Harris, who is out for the season after undergoing hip surgery, got some work in for the second consecutive day, running some routes with the wide receivers early on, and even taking some reps at safety with the scout team defense.

– Jackson spent the entire day on defense at cornerback.

– Kessler hit De’Quan Hampton outside for a 20-yard-plus gain.

– Kessler tried to hit Greene, but Marshall got his hand on the ball, and Nwosu made a diving interception.

– Kessler tried to hit Hampton over the middle, but Jackson broke up the pass.

– Browne went deep to Steven Mitchell Jr. along the sideline, but Seymour was there to break up the pass.

– Kessler hit Greene over the middle for a gain of 8 or 9 yards before Jackson made the stop.

– Kessler tried to hit Darreus Rogers over the middle but Jackson broke up the pass.

– Kessler hit Robby Kolanz outside for a 20-yard touchdown.

– Kessler hit Rogers for a 15-yard gain before Isaiah Langley made the stop.

– Hampton made a really nice leaping grab over Seymour in the corner of the end zone n a pass from Kessler.

– Kessler hit kolanz over the middle for a gain of close to 15 yards.

– Kessler hit Mitchell over the middle for a gain of around 10 yards before Lamar Dawson made the stop.

– Kessler tried to hit Hampton outside, but Seymour was there to deflect the pass.

– Kessler hit Justin Davis outside, and he outraced Seymour to the end zone for a 25-yard TD.

– Deontay Burnett made a beautiful diving catch over the middle for a gain of around 20 yards.

– Kessler hit Mitchell outside for a 25-yard TD.

– Scott Felix and a host of others stopped James Toland IV for no gain.

– Dominic Davis ran outside for a gain of close to 10 yards.

– Kessler hit Burnett outside for a 25-yard TD.

– Browne hit Ware outside for a gain of 10 yards.

– Browne tried to hit George Katrib outside, but Marshall broke up the pass.