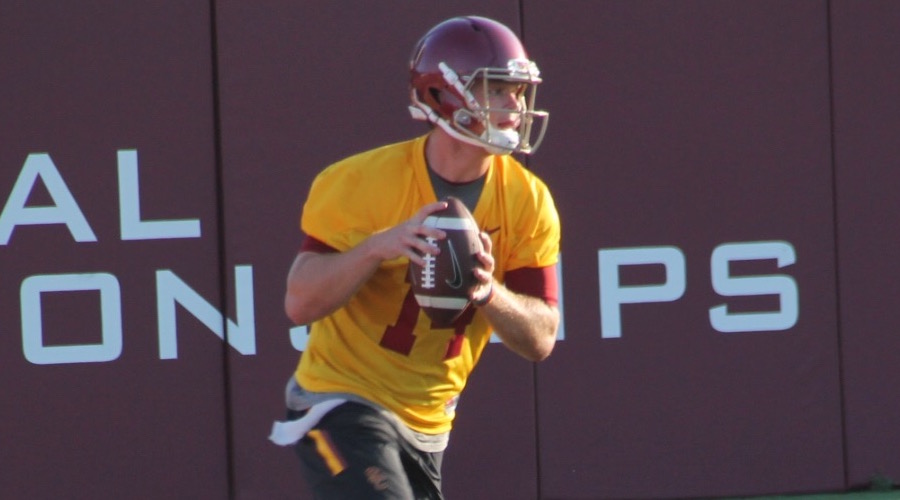 The Trojans kicked off UCLA week on Tuesday by coming out and taking part in a shorts, shoulder pads and helmets practice session that lasted around two hours.

With the team riding a six-game winning streak, and coming off a huge 26-13 victory over previously unbeaten Washington, USC head coach Clay Helton said that with the big rivalry matchup coming up this Saturday, the coaching staff addressed the team prior to practice to ensure that they stick with the formula that has gotten them to where they are today, and that they keep their emotions in check.

With Bruins quarterback Josh Rosen out for the season with a shoulder injury, UCLA has been in a downward spiral as of late, losing four consecutive games before coming up with a 38-24 victory over Oregon State this past weekend.

Still, as Helton noted, the Bruins were extremely competitive in all four of those recent losses, and he’s well aware that his team can’t take UCLA lightly.

“When we look at it as coaches, you say this is a quality team that could have a lot better record if one or two plays go their way,” Helton said. “So you better do your job. And the fact of the matter is that in the Pac-12, I don’t care what team it is, if you don’t do your job, you don’t bring your A game, you’re going to get beat.”

Alabama made headlines earlier this season when former tailback Trent Richardson began practicing with the Crimson Tide and lined up with the service team offense in the week leading up to the LSU game, and now it appears that USC has followed suit.

Vainuku, who played for the Trojans last season, was waived by the Houston Texans this past September. He lined up at running back on Tuesday.

“He’s in-between teams right now, and allowed to come out and get some work,” Helton said of Vainuku, who also took a small number of reps with the No. 2 offense. “And with some injuries to some backs ankle-wise, it’s very welcomed.”

Also lining up with the service team was graduate assistant Mike Goff, who took reps at center. Goff played 12 years in the NFL with the Cincinnati Bengals, San Diego Chargers and Kansas City Chiefs.

“We’ve got some injuries on the offensive line and defensive line – it’s Week 11. And it’s always good to have a graduate assistant that’s also played in the NFL to come out and do a couple things,” Helton said. “He still can dance.”

– Defensive tackle Josh Fatu (ankle) did not participate in practice and he had a boot on his left foot. Helton said that he is unlikely to practice tomorrow, and that he is “50-50” to play on Saturday.

– Defensive tackle Stevie Tu’ikolovatu (knee) was limited, but only as a precautionary measure. With Fatu out, and Tu’ikolovatu limited, Malik Dorton, Jacob Daniel and Christian Rector got more work in than usual.

– Helton said that Porter Gustin (ankle), Ronald Jones II (knee bruise) and Iman Marshall (hamstring) were all limited, but their injuries are not considered to be serious.

– Cornerback Jonathan Lockett (hip) got some work in with a trainer on the side during practice.

– During a 7-on-7 period, Michael Pittman Jr. made a fantastic diving catch on a pass over the middle from Sam Darnold. During the same period, Jalen Greene made a nice one-handed grab on a pass from Darnold.

– Darnold looked extremely sharp in the final 11-on-11 period of the day, connecting on long passes with Taylor McNamara, Greene, Pittman and Daniel Imatorbhebhe.

– NFL scouts from the Baltimore Ravens, Denver Broncos, Jacksonville Jaguars, Minnesota Vikings and New England Patriots were among those on hand.

– Max Browne hit Tyler Vaughns outside, but Adoree’ Jackson came up in a hurry and made the stop after a short gain.

– Browne hit Pittman over the middle for a gain of around 15 yards.

– Browne hit Vainuku outside, but Cameron Smith limited the play to a short gain.

– Darnold hit JuJu Smith-Schuster over the middle for a long touchdown.

– Darnold hit De’Quan Hampton outside for a gain of over 20 yards.

– Browne hit Cary Angeline outside for a gain of around 15 yards.

– Browne hit Pittman outside for a 10-yard gain.

– Darnold hit McNamara outside for a gain of around 30 yards.

– Darnold hit Darreus Rogers outside for a gain of close to 20 yards.

– Darnold hit Jalen Greene outside for a gain of over 25 yards.

– Darnold hit D. Imatorbhebhe outside for a gain of 10 yards.

– Darnold hit Pittman outside for a gain of over 25 yards.

– Browne hit Vaughns outside for another big gain.

– Darnold hit Rogers over the middle for a gain of around 15 yards.

– Darnold hit Greene down the seam for a 20-yard gain.