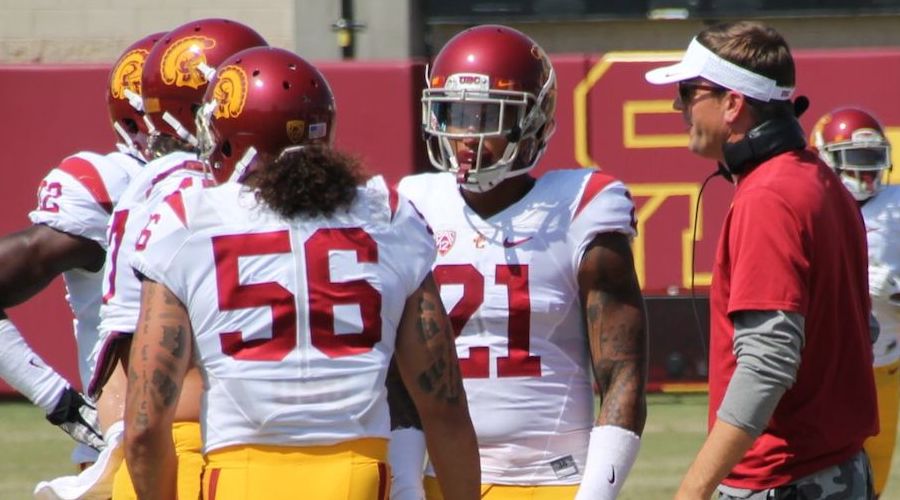 Coming off an impressive victory over a previously undefeated Utah team, the Trojans were in high spirits on Tuesday, but still noticeably focused on the task at hand as they took part in a full-pads practice session on Brian Kennedy-Howard Jones Field.

“There was no let-down,” said USC interim head coach Clay Helton. “It was an unbelievable atmosphere out here today – competitiveness, great team-run period and it just looks like this team wants to continue getting better. You see guys out here pre-practice, post-practice, doing the little extra things to try to be a pro.”

USC junior linebacker and team co-captain Su’a Cravens echoed Helton’s statements, noting that with a 5-2 Cal team coming up on Saturday, the Trojans can’t afford to spend too much time thinking about last weekend’s emotional win.

“I think we’ve moved on,” Cravens said. “We haven’t even spoken about it. We’re on to Cal. Cal is a tough team. They’re going to pass.”

And Cravens isn’t joking. The Golden Bears feature one of the nation’s most prolific aerial attacks, led by junior quarterback Jared Goff, who averages 323.6 passing yards per game – the No. 10 mark in the FBS.

“I think he’s probably one of the better anticipatory throwers there are,” Helton said. “He’s had this group of wideouts for a number of years now, and you can tell they’re on the same page. He’s releasing the ball before they’re even near open and hitting them with great accuracy. We had a huge challenge last week in the run game. This week we’ve got a huge challenge in the pass game. I know [Defensive Coordinator] Justin [Wilcox] and the staff will do a great job.”

Just two days after his Buffalo Bills team took on the Jacksonville Jaguars in London, former Trojans wide receiver Robert Woods was back on campus at USC. Taking in a majority of the Trojans’ practice session on Tuesday, he was later brought up in front of the team by Helton before they broke for the day.

“He’s the example of what a Trojan is, and I made that point to the guys,” Helton said of Woods, the USC career leader in receptions. “He’s a true professional. Every day he was here, even as a rookie he was always studying his playbook. He always treated practice exactly like it was the game. He passed that on to Marqise Lee, Nelson Agholor and even JuJu [Smith-Schuster]. That tradition has carried on down at the wide receiver position, and he’s the one that really had a great hand in it with those kids, so it was great to have him back out here.”

– Chad Wheeler, who missed the Trojans matchup with Utah due to concussion-like symptoms, returned to full-time duty on Tuesday, lining up with the No. 1 offense at left tackle throughout the day. With Wheeler back in the fold, Zach Banner moved back over to right tackle.

– With Max Tuerk (knee) and Toa Lobendahn (knee) both declared out for the remainder of the season, Khaliel Rodgers continued to run with the first-team offensive line group at center. Rodgers stayed late after practice to work on his snaps with quarterback Cody Kessler.

– Nico Falah was the primary center with the No. 2 offense, while Cole Smith, who had been serving in that role previously, slid over to guard.

– Tight end Taylor McNamara (shoulder) wore a yellow jersey and did not take part in contact drills, but he was moving well and participated in the rest of practice. With both Petite and McNamara out during 11-on-11 team drills, Connor Spears and Cyrus Hobbi went with the No. 1 offense at tight end.

– Tailback Tre Madden (knee), who did not play against Utah, suited up but had a very light day of work.

– John Plattenburg and Michael Hutchings returned to action after sitting out last week due to a stomach bug. Plattenburg came up with an interception during a service team period, and he also tackled Aca’Cedric Ware for a loss during an 11-on-11 team period.

– With Cal’s high-flying passing attack on tap, Adoree’ Jackson spent the entire day at cornerback with the No. 1 defense, after spending a majority of his time with the offense last week.

– Dominic Davis spent the bulk of his day at wide receiver.

– Alex Wood connected on 3 of 4 attempts during a late field goal period.

– Ronald Jones II ran outside for a gain of seven or eight yards before Chris Hawkins made the stop.

– Scott Felix stopped Jones after a gain of four yards.

– Lamar Dawson and a group of others stopped Aca’Cedric Ware for no gain.

– Jones ran inside for a gain of close to 10 yards before Osa Masina made the stop.

– Soma Vainuku ran hard inside for a gain of 10 yards before Plattenburg made the stop.

– Kessler hit Smith-Schuster outside for a gain of close to 10 yards before Jackson made the stop.

– Kessler hit Spears over the middle for a gain of around 15 yards before John Plattenburg made the stop.

– Deontay Burnett made a nice leaping 10-yard catch along the sideline on a pass from Kessler.

– Kessler tried to connect with De’Quan Hampton but Kevon Seymour broke up the pass.

– Kessler hit Jalen Greene over the middle for 10 yards before Masina made the stop.

– Kessler connected with Smith-Schuster over the middle for a gain of close to 30 yards before Iman Marshall made the stop.

– Justin Davis ran inside for a gain of seven or eight yards before Reuben Peters made the stop.

– Kessler tried to hit Smith-Schuster outside, but Seymour was there and tipped the ball away, just missing out on an interception.

– Max Browne connected with David Mellstrom outside for a gain of 10 yards.

– Browne found D. Davis outside for a gain of close to 10 yards.

– Kessler hit Burnett outside for a gain of around 15 yards.

– Kessler went back to Burnett outside for a gain of over 20 yards before Isaiah Langley made the stop.