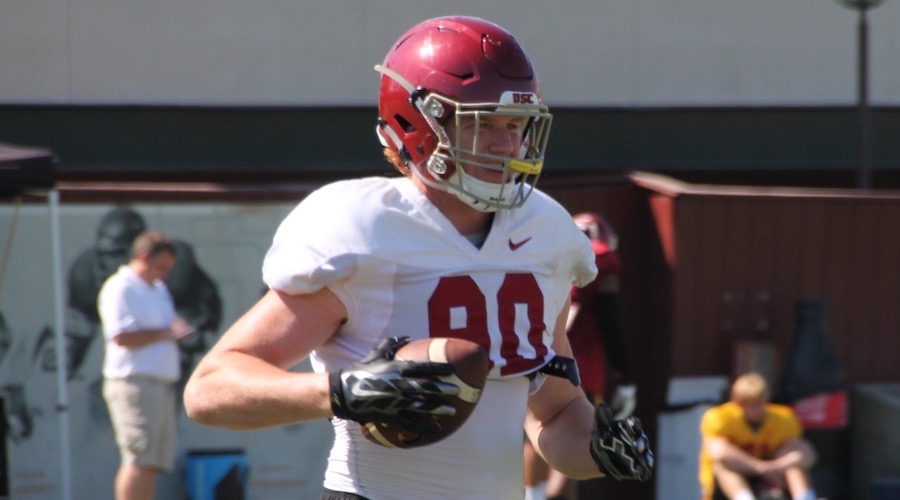 With USC in the midst of a bye week, the Trojans took part in an extremely abbreviated practice session inside Loker Stadium on Tuesday that lasted just a little over one hour long.

Set to host Cal in the Coliseum next Thursday night, Clay Helton said that his team was able to get a head start in preparing for the Golden Bears during the session, noting that they got all of their first and second-down game planning in.

The other primary focus of the day was to give the younger players on the team more work than they might receive during a typical week of practice.

That was particularly evident in the only 11-on-11 team period of the day, which featured a lineup on both sides of the ball comprised entirely of those less-experienced performers, many of whom who are on pace to redshirt this season.

Some standouts from that final period included outside linebacker Connor Murphy, who came up with a sack, tailback Vavae Malepeai, who showed nice vision running with the ball, and wide receiver Josh Imatorbhebhe, who hauled in a 35-yard touchdown pass from quarterback Matt Fink.

“We got some young kids quality work there at the end, with a little bit of a developmental scrimmage there,” Helton said. “That ability to see a Josh Imatorbhebhe out there, a Michael Pittman, a Velus Jones, a Trevon Sidney, a Tyler Vaughns…you look at some guys out there and you go, ‘wow, there are some talented kids here,’ and these were quality reps for them to try to grow. These weeks are really important.”

– Helton noted that the bye week will also allow the players on the team to focus on academics and to get healthier, and it also provides the coaches with the opportunity to spend more time on their recruiting efforts. He said that the entire staff will be out in force on Thursday and Friday night.

– The team practiced in shorts, shoulder pads and helmets on Tuesday.

– Wide receiver JuJu Smith-Schuster (back) was suited up and moving around well, but he did not participate in practice as a precautionary measure.

“We just held him today to try to get some bumps and bruises healed,” Helton said. “He’ll be back by Saturday.”

– Tailback Justin Davis, who suffered a high ankle sprain against Colorado that prevented him from playing against Arizona, did not participate in practice. Helton said that they are hoping to get him out of the boot he is currently wearing within the next two days.

“He’s starting to feel better,” Helton said, “but we’ll see how he does once he gets out of the boot.”

– Helton also noted that Zach Banner, who has been hampered by an injured ankle, came out of the Arizona game “with flying colors.” He ran with the No. 1 offense throughout practice.

– Helton said that Wednesday’s practice session will be similar to the one that the team went through on Tuesday.

Highlights from the developmental scrimmage

– Malepeai ran left, but then reversed field and found a hole to pick up 7 or 8 yards before Iosefa made the stop.

– Malepeai ran up the middle for a gain of close to 10 yards before Ykili Ross made the stop.

– Fink threw deep to Pittman, but Jack jones and C.J. Pollard were in tight coverage and the ball fell incomplete.

– Malepeai ran outside for a gain of around 5 yards.

– Fink threw outside to J. Imatorbhebhe, but J. Jones broke up the pass.

– Fink hit Pittman outside for a gain of 10 yards.

– Fink scrambled before finding a wide-open J. Imatorbhebhe for a 35-yard TD.

– Iosefa and others stopped Malepeai after a short gain.