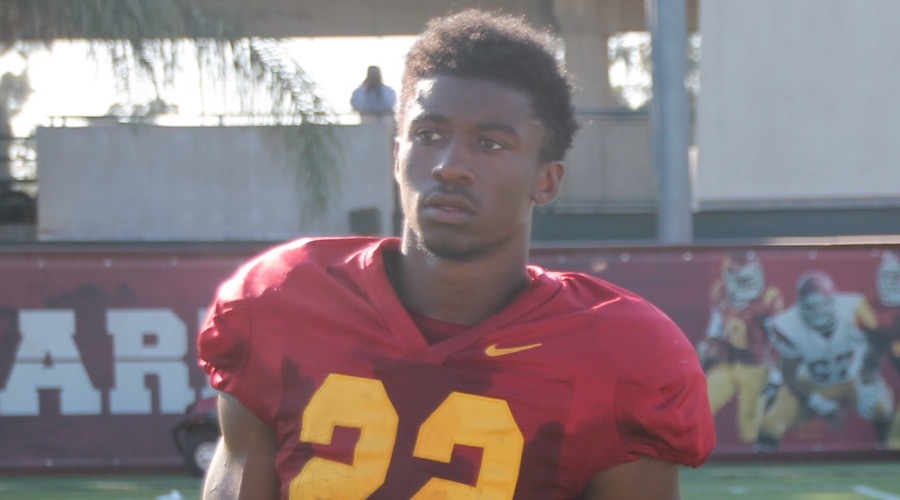 Coming off an impressive victory over Arizona State, the Trojans hit Brian Kennedy-Howard Jones Field on Tuesday afternoon for a full-pads practice, and with a much-improved Colorado team coming up on Saturday, Clay Helton’s squad was all business during the two-hour session.

Following practice, Helton spoke highly of Mike MacIntyre’s team, which currently sits atop the Pac-12 South with a record of 3-1 (2-0 Pac-12) and ranks No. 1 in the conference in total defense, and No. 3 in total offense.

“I think Coach MacIntyre is doing a wonderful job,” Helton said. “Colorado is, one, bringing good players in, and then, two, developing them. We saw it last year, to be honest with you. We saw them game-after-game, lose close games, and even in our game we walked away from that victory saying, ‘wow, when this team matures, he’s going to have something special here.’ And lo and behold it’s a year later and they’re doing wonderful things.”

As for the practice itself, it featured another strong showing by quarterback Sam Darnold, who makes it all look routine at this point. The redshirt-freshman passer was particularly sharp during a late 7-on-7 period when completed pass-after-pass, including deeper tosses to Steven Mitchell Jr., JuJu Smith-Schuster and Daniel Imatorbhebhe.

“I think the decision-making, the anticipation and just the game maturity for a redshirt-freshman is beyond [his years],” Helton said. “He’s an old soul right now, and hopefully that continues.”

Helton also lauded the efforts of USC senior tailback Justin Davis, who has compiled back-to-back 100-yard-plus rushing games, and according to the Trojans coach, has really come into his own this season, becoming a complete back.

“As impressed I am with him running the ball, he’s really catching the ball out of the backfield,” Helton said. “He made two great catches [against Arizona State] that produced explosion plays for us – one for a near-touchdown. And also he’s creating explosion runs. We really challenged him – we felt like we could get to the safety position in the run game, and he was going to have to make the last one miss, and he did that twice on two huge runs.”

– Among those who did not participate in practice were Noah Jefferson (academics), Taylor McNamara (lower back strain), Ykili Ross (shoulder sprain) and Jabari Ruffin (concussion protocol).

– Right tackle Zach Banner, who missed the Arizona State game due to an ankle injury, suited up and participated in the early goings of practice, running with the No. 1 offense, but he was pulled a short time later and did not return. Helton said that they will re-evaluate him on Wednesday.

– Tailback Aca’Cedric Ware injured his hand on Saturday, but Helton said that X-Rays came back negative, and he did appear to participate in at least a portion of practice on Tuesday.

– Tailback Dominic Davis, who missed the Arizona State game due to a hyperextended knee, returned to action on Tuesday. Helton said that he believes Davis will play on Saturday.

– Cornerback Jonathan Lockett, who suffered a shoulder sprain on Saturday, was a full participant.

– Freshman safety Jamel Cook, who has missed extensive time due to a foot injury, also returned, and he appeared to take part in a majority of the practice session – running with the scout team defense.

– Both Jordan Simmons and Chuma Edoga saw time with the No. 1 offense at right tackle when Banner went to the sideline. Edoga also took some reps at left tackle at times.

– Cornerback Jack Jones came up with the play of the day on defense during the first 11-on-11 period, as the young freshman made a perfect break on a quick pass outside from Max Browne to Isaac Whitney before pulling in the interception and taking it back for six.

– Lockett also came up with an interception during a later service team period. Porter Gustin had a sack just a few plays later.

– During a one-on-one lineman period Jordan Simmons did well, coming up with impressive wins over Rasheem Green and Josh Fatu.

– Deontay Burnett, who celebrated his birthday on Tuesday, was given a surprise Gatorade bath following practice by JuJu Smith-Schuster among others.

– USC athletic director Lynn Swann was in attendance on Tuesday, as were NFL scouts from the Arizona Cardinals and Houston Texans.

– Darnold hit Mitchell over the middle for a gain of close to 10 yards.

– Darnold hit Mitchell outside, but Lockett came up in a hurry and stopped the play for a short gain.

– Darnold tried to hit D. Imatorbhebhe over the middle, but Leon McQuay III got a hand up and broke the pass up.

– Darnold hit D. Imatorbhebhe outside for a gain of 7 or 8 yards.

– Browne hit Ronald Jones II outside for a short gain before Jordan Iosefa made the stop.

– Browne tried to hit Whitney outside, but Jones came up with the pick-six.

– Matt Lopes and Co. stopped Jones for no gain.

– Dominic Davis ran outside for a gain of close to 10 yards.

– Michael Hutchings and Co. stopped D. Davis for no gain.

– Darnold hit Smith-Schuster outside for a gain of close to 15 yards.

– Browne hit Tyler Vaughns over the middle for a gain of 10 yards.

– Browne hit Rogers over the middle for a gain of around 10 yards.