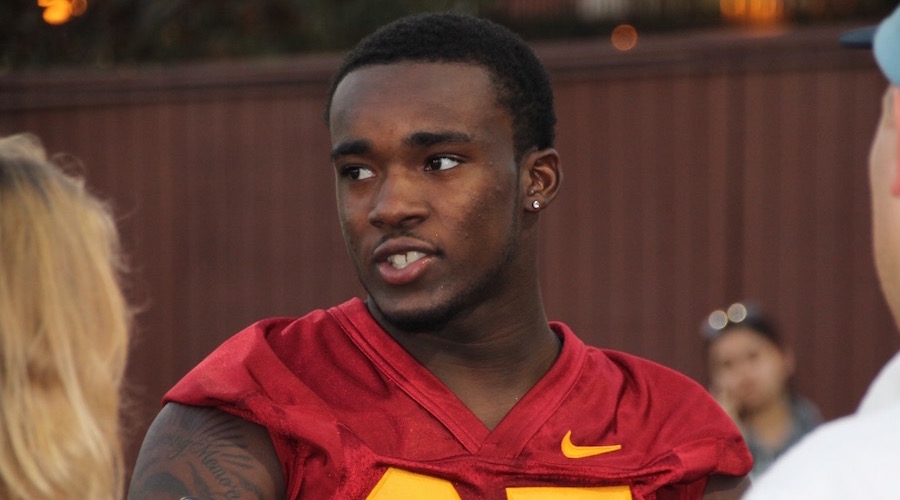 Coming off a second consecutive victory inside the Coliseum, the Trojans hit Brian Kennedy-Howard Jones Field on Tuesday in preparation for Saturday’s clash at Arizona.

When the Trojans do face the Wildcats, however, it will probably be without starting tailback Justin Davis, who had been on a tear over the last three games. The senior out of Stockton (Calif.) did not participate in practice after suffering a high ankle sprain this past weekend, and USC head coach Clay Helton said that he believes that the soonest that he is likely to return will be for the Trojans’ matchup with Cal on Oct. 27.

With Davis sidelined, Ronald Jones II, Aca’Cedric Ware and Dominic Davis picked up the slack at the tailback position on Tuesday, and Helton noted that the Trojans offensive line is being watched with an extra-close eye this week.

“What a great opportunity for RoJo, for Ced Ware and for Dominic Davis,” Helton said. “And there will be some over-coaching on that offensive line this week, I can promise you, between myself and Coach [Neil] Callaway, to really open up some holes for those young backs – and to take some pressure off a young quarterback.”

Of the tailbacks it was Jones, in particular, who appeared to have an extremely busy day rushing the ball. The sophomore out of McKinney (Texas) has yet to perform up to the standard that he established last season, but Helton believes that he could be close to re-emerging.

“You look at the last game, I thought he started to get going,” Helton said. “He averaged 5.6 yards a carry off 11 touches. He made a good first-down catch for us on a screen. He’s getting there. I think putting him out in space helped last week on the option that you saw – he’s dynamic when he’s one-on-one with the safety. But between the tackles, I’m hoping the reps in real-live game action will be able to help him. I truly think the kid is ready for a breakout game. I hope it’s this week.”

Banner gets work in

Having sat out each of the Trojans’ last two games due to an ankle injury, Zach Banner participated in about half of the team’s practice session on Tuesday, lining up with the No. 1 offense at his normal right tackle spot during a large portion of the early 11-on-11 periods.

Following practice, Helton said that he has hope that Banner will be able to play this weekend, but he also added that while the fifth-year senior would return to his starting role in such a scenario, he would likely rotate with Chuma Edoga as well as Jordan Simmons – both of whom also saw time with the No. 1 unit at right tackle on Tuesday.

“I think we’re going to have to go through the week and see how he’s doing,” Helton said of Banner. “Any time that you have two-and-a-half to three weeks off there, there’s a conditioning factor also that comes into play. I don’t know if he’s ready to play a full game. Obviously if he’s ready, he’ll start. But we’re expecting to have to use Chuma, and possibly Jordan.”

– Jabari Ruffin was back in action after clearing concussion protocol, as was Ykili Ross, who had been sidelined with a shoulder injury as of late.

– Freshman tailback Vavae Malepeai (scapula) got his first live 11-on-11 work in since way back in fall camp.

– Michael Hutchings (shoulder) and Taylor McNamara (back/quad) were both limited.

– With Hutchings sidelined during every team period, freshmanJordan Iosefa ran with the No. 1 defense throughout the day at the WILL inside linebacker spot alongside MIKE linebacker Cameron Smith. Helton noted that Olajuwon Tucker is also likely to see time with the No. 1 defense alongside Smith at some point this week. Tucker has been lining up on the outside at SAM linebacker as of late. The Trojans head coach did add, however, that he has hope that Hutchings will be able to play this weekend.

– Nose tackle Josh Fatu appeared to take a greater number of reps with the No. 1 defense than he usually does, particularly when the unit was in its nickel alignment, and he lined up alongside Rasheem Green as one of the two interior defensive tackles.

– Having turned the ball over four times on Saturday, the offensive skill position players remained after practice to take part in a ball security drill.

– Crowd noise was piped in during a portion of practice.

– Fullback Reuben Peters came up with the catch of the day, making a spectacular one-handed grab over the middle in traffic on a pass from Sam Darnold during a 7-on-7 period.

– Isaac Whitney also came up with a highlight-reel catch, making a one-handed snag of his own during a one-on-one period.

– Jamel Cook continued to get plenty of work with the service team, making a really nice pass break-up on a deep pass over the middle to Steven Mitchell Jr. at one point.

– Reserve cornerback Jalen Jones came up with the defensive play of the day, making a leaping interception on a deep pass over the middle from Darnold to Darreus Rogers.

– Former Trojans players Ryan Dillard, Paul McDonald and Darrell Rideaux were among those in attendance.

– Darnold hit Rogers outside for a gain of close to 10 yards.

– Darnold hit Rogers over the middle for a gain of 10 yards.

– Max Browne hit Jalen Greene outside for a gain of 5 or 6 yards.

– Darnold hit Michael Pittman Jr. outside for a gain of 7 or 8 yards.

– Darnold ran outside for a gain of around 8 yards.

– Malepeai ran for a short gain outside before Iman Marshall made the stop.

– Browne hit De’Quan Hampton outside for a gain of 10 yards.

– Browne hit Jones outside for a gain of 10 yards.

– Houston stopped Ware for a loss.

– Malepeai ran up the middle for a gain of 5 or 6 yards before Ruffin made the stop.

– Darnold hit Daniel Imatorbhebhe down the seam for a big gain.

– Darnold tried to hit Rogers deep down the middle, but Jalen Jones came up with the pick.

– Greene hit Tyler Vaughns outside for a gain of 7 or 8 yards.