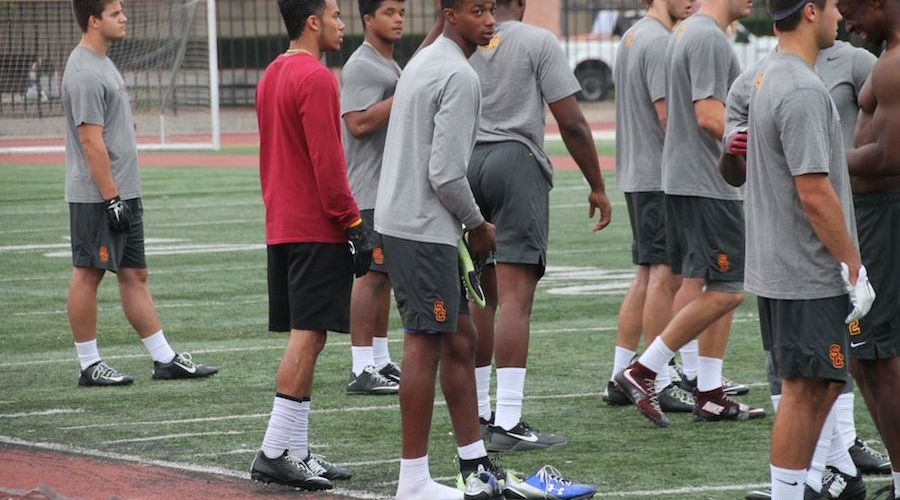 There were several new arrivals today for the freshmen with Tyler Vaughns, Trevon Sidney and Frank Martin making their first appearances of the summer.

Before Vaughns was able to hit the field, however, there was the matter of a uniform adjustment after he showed up in his high school shorts and cleats, which happen to be the color blue, a little too close to UCLA colors. Several players began giving him grief, telling him he needed to change out of them (photo above), and it was Jalen Greene to the rescue with a pair of new shorts and Daniel Imatorbhebhe provided different color shoes.

Sidney also attracted the attention of the veterans with his cropped haircut and a nifty move he put on one play, which prompted Chris Hawkins and Iman Marshall to call him “Rico Suave” and mimicking some salsa dance moves. Trevon made some plays, including a catch over the middle against C.J. Pollard.

Martin took reps late in the day at right guard. Also on the o-line it was Zach Banner at LT and Nathan Smith at RT with Chad Wheeler not in attendance.

On one of the first plays of the day there was a swing pass in the flat to Reuben Peters, who caught the ball to good-natured cheers from his teammates, after dropping a pair of passes on Tuesday.

Max Browne hit the first big pass when he went deep to De’Quan Hampton against coverage from Isaiah Langley.

Ronald Jones had a carry where he got stripped at the sideline, and he promptly dropped to the ground to do push-ups. There was a lot of running today, with Jones, Justin Davis and Aca’Cedric Ware all getting carries.

Quinton Powell had a pair of plays where he jumped the snap count and got in the backfield right away. On the first one he stripped Browne as soon as Max caught the center snap, and later he stopped Jones at the line on a run play.

Darnold connected with Tyler Petite on two passes. Sam also tried to hit Jalen Greene deep but Yoofi Quansah was there to break it up. Jalen came back later with a nice catch along the sideline where he had to extend his arms high to make the grab.

Isaac Whitney reached down to get a low screen pass and then had nice yards after catch.

The DB’s had a string of pass break-ups, Chris Hawkins got things started with his defense against Hampton, and then Marvell Tell also broke one up against Hampton. Jackie Jones got in the act as well when Matt Fink tried to throw it up for either Sidney or Vaughns, but Jackie knocked it away.

Ajene Harris gave a nice pop on Josh Imatorbhebhe after a short catch.

Hampton had one of the best catches of the day against coverage from Matt Lopes.