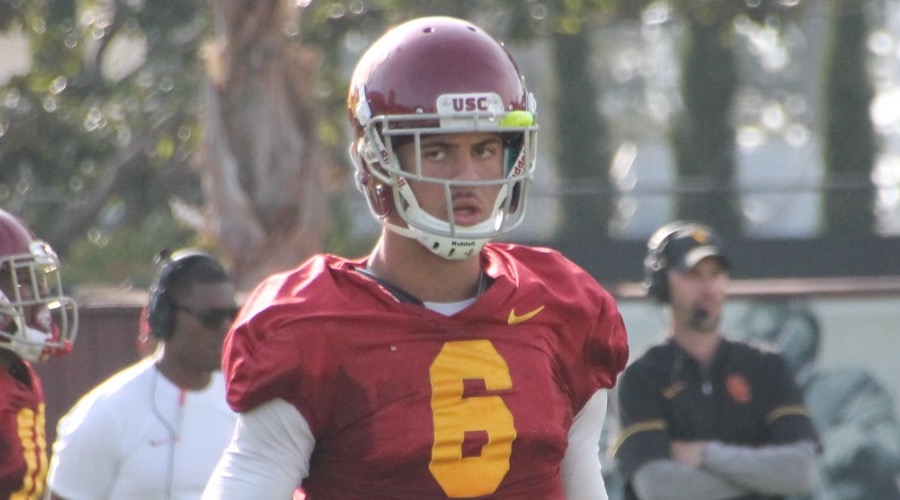 The Trojans practiced inside the Coliseum for the first time this spring on Thursday, and the familiar setting definitely appeared to energize the team as they took part in a two-hour, full pads workout that was marked by some standout play on both sides of the ball.

“It’s great to be in the Coliseum,” said USC head coach Clay Helton. “Just to see the competitive nature that the kids played with today makes you a happy football coach. We challenged them early and reminded them that every time that we walk into this special place there’s an attitude that we bring, and I’m so happy that they brought that today. I could see it from an energy level, to a competitive level, to a focus level – I thought they were absolutely awesome.”

In both instances the No. 2 unit came out victorious, with Michael Pittman Jr. making a beautiful 25-yard touchdown reception over Jack Jones, before Jordan Iosefa forced Ronald Jones II to fumble after he hauled in a quick pass from Sam Darnold, with the defense making the recovery.

Pittman’s touchdown capped a fantastic day for the sophomore receiver that also included a great leaping catch in the end zone during a one-on-one period – also against Jones – and Helton was quick to single him out for his play following the workout.

“He was put in some one-on-one situations all day and I thought he did an absolutely tremendous job,” Helton said. “He really made a huge play down there against a good corner in Jack, and made a huge play to set the tone of that last overtime period.”

– Helton said that offensive lineman Viane Talamaivao underwent successful surgery on his partially torn bicep muscle on Tuesday, and that he is expected to return to action during the first or second week of fall camp in August.

– Freshman offensive lineman Andrew Vorhees did not practice due to a sore back, and there is a chance that he will sit out the remainder of the spring.

– Nico Falah (back), Daniel Imatorbhebhe (shoulder) and Iman Marshall (shoulder sprain) were all limited. Falah did participate in live drills for the first time this spring – taking part in 10 plays with the No. 1 offense at center. Marshall took part in individual drills as well as a 7-on-7 period only, but he is expected to be full-go again on Saturday or Tuesday.

– Deontay Burnett went out late after diving for an incomplete pass due to what Helton called a ‘ding’ to his head.

– The No. 1 offense to start the day featured Sam Darnold at QB, Jones II at RB, Deontay Burnett at WR, Jalen Greene at WR, Tyler Vaughns at WR, Tyler Petite at TE, Chuma Edoga at LT, Roy Hemsley at LG, Falah at C, Jordan Austin at RG and Chris Brown at RT.

– Clayton Johnston also saw time with the No. 1 offense at both left and right tackle.

– There was a spirited ‘pressure’ period at one point where the defense came hard after the quarterback, and they were successful much of the time. In fact, Oluwole Betiku came up with two consecutive sacks on Matt Fink at one point. The sophomore outside linebacker was extremely impressive on Thursday. Darnold did fair better, however, with Helton singling him out for his ability to get the ball out quickly to the correct receiver despite the pressure.

– During the one-on-one period Deontay Burnett put a great shake move on Harris, breaking wide open to haul in a deep pass.

– During a 7-on-7 period Darnold threw a pass outside that Houston had both hands on, but he dropped what looked a like a sure interception.

– During that same period Cary Angeline made a really nice reaching grab in the corner of the end zone for a 15-yard TD catch on a pass from Fink.

– There was a host of recruits in attendance including Class of 2018 commit Raymond Scott (Harbor City, Calif./Narbonne), Class of 2018 target Bryan Addison (Gardena, Calif./Serra) and Class of 2019 commit De’Gabriel Floyd (Los Angeles, Calif./Hawkins).

– Tell and others stopped Malepeai after a short gain.

– Malepeai ran for a tough five yards before Smith made the stop.

– Fink attempted to throw outside, but Matt Lopes tipped it into the air, and Ykili Ross made a diving interception.

– Fink scrambled for a nice gain.

– D. Davis ran outside for a gain of around 10 yards, thanks in part to a nice block by V. Jones on Jamel Cook.

– Reuben Peters ran outside for a big gain, with Yoofi Quansah forcing a late fumble.

– Jack Sears ran outside for a gain of close to 10 yards.

– Darnold hit Vaughns over the middle for a gain of 10 yards.

– Darnold tried to hit Tyler Petite over the middle, but Smith broke up the pass.

– Darnold hit Vaughns outside for close to 10 yards.

– Fink hit Pittman outside for a gain of 10 yards.

– Fink hit Angeline outside for a gain of around 15 yards.

– Fink hit Pittman for a 25-yard TD despite tight coverage by J. Jones.

– Tuipulotu and Co. stopped Fink for a loss on the PAT attempt.

– Darnold went deep to Burnett but he couldn’t pull it in.