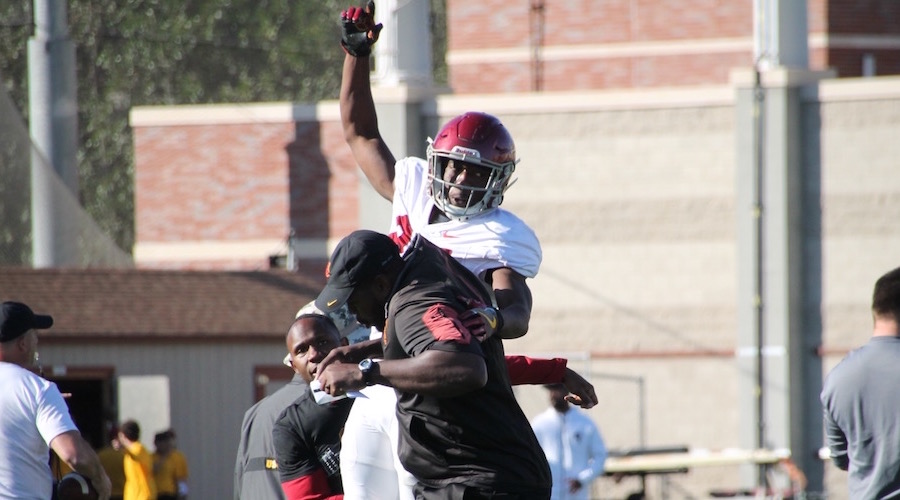 With the spring game coming up on Saturday, the Trojans took part in an extremely light, shorts-and-helmets practice session on Thursday on Brian Kennedy-Howard Jones Field that lasted all of around an hour-and-a-half.

The workout still featured a number of highlight moments, however, especially toward the tail-end of the session, and continuing the trend of the spring so far, it was Clancy Pendergast’s defensive unit that was responsible for a majority of those plays.

Sophomore cornerback Jack Jones came up with the arguable play of the day during a two-minute period when he made a fantastic leaping interception on a Sam Darnold pass outside to Tyler Vaughns, and Ajene Harris capped the day off with another interception off of Darnold – this time on a  pass to Greene in the corner of the end zone in the practice-ending two-point conversion period.

“You just look at those guys that are back there and they’ve just played a ton of football,” said USC head coach Clay Helton in discussing the defense. “And then the second year in the system, I can’t say enough how important it is to keep staff consistency and to keep the same system. You can see those guys playing with confidence, and I thought today they did a great job with situational mastery. That was a two-point segment that was a best-of-two-out-of-three, and they really shut the offense out, so credit to the defense. They have played consistent from Practice 1 all the way through.”

Immediately following practice Helton revealed the news that some pretty significant names will be held out of Saturday’s spring game due to injury.

As such, Helton reiterated what he already stated on Tuesday – that the team will not be put through a simulated matchup, and that the spring game will actually resemble more of a traditional practice that will contain a number of situational periods. He also went into detail about the exact schedule.

“Our numbers are so limited that we’re going to do a phase, take a break, and then move to the next situation,” Helton said. “The situations: We’ll do a 7-on-7 [skeleton], then we’ll have a team-run emphasis with run-play action (RPO), we’ll put our offense in a backed up situation and work out from our own end zone, we’ll move into some open field situations – and that will be a tackling situation for us – we’ll move down to the red zone, we’ll put Mike Brown in a couple situations where he has to operate in the Coliseum, and then we’ll finish up with a two-minute segment. So, more of a situational phase, and because of that, no score will be kept.”

– Gustin, Langley, Petite, Vorhees and Young did not participate in practice.

– In the lone 11-on-11 period the No. 1 offense featured Darnold at QB, Ronald Jones II at RB, D. Imatorbhebhe at TE, Tyler Vaughns at WR, Jalen Greene at WR, Velus Jones at WR, Clayton Johnston at LT, Roy Hemsley at LG, Nico Falah at C, Jordan Austin at RG and Chris Brown at RT.

– Since there was no contact in practice, Edoga actually did participate, but with the No. 2 offense at right tackle. Similarly, Burnett participated in a portion of practice, catching a 40-yard touchdown from Darnold during a 7-on-7 period.

– Despite earlier plans for Jack Jones to see time on offense this spring, Helton said that the lack of numbers at cornerback just didn’t allow for that to happen, although it is likely to take place in fall camp. Depth is such an issue at cornerback right now, in fact, that Jamel Cook even took some reps there on Thursday with the No. 2 unit.

– One play that caught everyone’s attention took place in the 7-on-7 period when Matt Fink’s pass downfield was tipped into the air by Jordan Iosefa, and it landed right into the arms of Daniel Imatorbhebhe, who ran free for a 30-yard touchdown.

– Clay Helton’s father, Kim, was also on hand for the second consecutive practice.

– Darnold hit Cary Angeline outside for a gain of 5 or 6 yards.

– Darnold hit Burnett down the seam for a 40-yard TD.

– Fink hit Michael Pittman over the middle for a gain of around 10 yards.

– Fink hit Velus Jones outside for a gain of 10 yards.

– Fink’s pass over the middle was tipped by Iosefa, but D. Imatorbhebhe reeled it in and ran for a 30-yard TD.

– Darnold tried to hit Greene outside but Harris broke up the pass.

– Darnold hit Vaughns outside for a gain of close to 10 yards.

– Darnold hit Vaughns over the middle for a 15-yard gain.

– Jack Sears hit V. Jones over the middle for a gain of around 15 yards.

– Sears hit Angeline over the middle for a 15-yard TD.

– Darnold hit Vaughns over the middle for a 20-yard gain.

– Darnold tried to hit Vaughns outside, but J. Jones came up with the interception.

– Darnold hit Vaughns over the middle for a gain of close to 30 yards before Hawkins made the stop.

– Darnold tried to hit V. Jones over the middle, but Marshall broke it up.

– Darnold threw to Greene in the corner of the end zone, but Harris was there to make the interception.