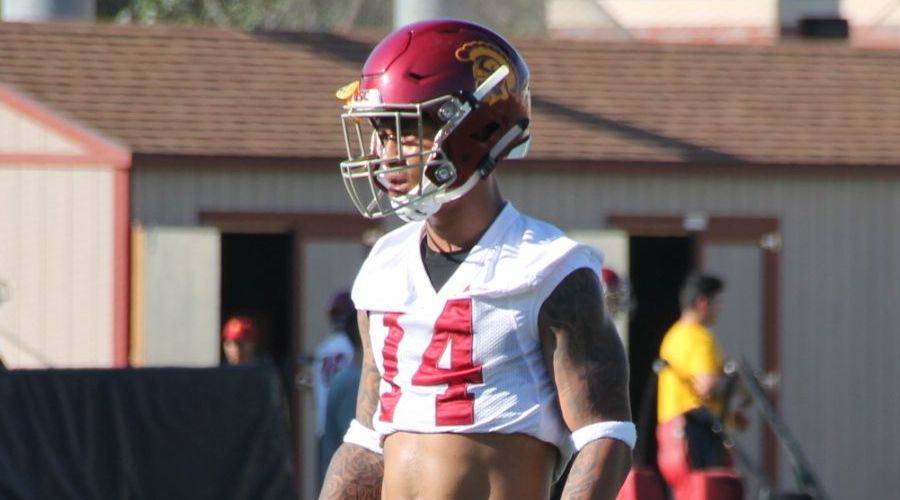 The Trojans were back on Brian Kennedy-Howard Jones Field on Thursday for Day 2 of spring ball, and following the two-hour, shorts-and-helmets session USC head coach Clay Helton was in high spirits, clearly pleased with what he saw from his team.

“Another good day for us,” Helton said. “I can’t enough of these days. I wish you could have a hundred of them.”

One position group that drew praise from Helton following practice was Neil Callaway’s offensive line unit. A group that lost not only a wealth of experience, but also size in the form of starters Zach Banner, Chad Wheeler and Damien Mama from this past season’s squad, the Trojans head coach said that the current No. 1 group – which has primarily featured Chuma Edoga at left tackle, Chris Brown at left guard, Cole Smith at center, Viane Talamaivao at right guard and Roy Hemsley at right tackle – is certainly slimmer, but that they’ve made up for it with their quickness.

“Size-wise it’s hard to replace Zach Banner,” Helton said. “That’s about as big as you get. But the quickness factor is really evident. One thing that I’ve been impressed with that jumps out is the athleticism of Roy Hemsley right off the bat. Chuma’s athleticism obviously is evident. We’ve seen that from him before. But they look like a quicker line right now at about 285-290 [pounds].”

Two offensive linemen who figure to jump into the starting lineup upon their return from injury are Nico Falah and Toa Lobendahn. Falah has been sidelined so far due to a back injury, but he is likely to return to action following spring break. Lobendahn, meanwhile, is still recovering from a torn ACL suffered early this past fall, and he is expected to make a full return in fall camp.

Helton said that both players will ultimately compete for the starting center job, with one of them likely to wind up at another position.

“The best player, the guy that can actively do center the best, will be that player,” Helton said. “And then you have to find your best five, and one of them has to move out and be a guard or tackle. We’ll look at both kids once they’re healthy.”

– The Trojans will practice in full-pads for the first time this coming Saturday – practice No. 3. They will take part in their first scrimmage in practice No. 6.

– Heltion announced that linebacker Olajuwon Tucker, who was declared academically ineligible for the Rose Bowl, will not take part in any spring practice sessions to focus on his schoolwork. He is, however, participating in the team’s morning walk-throughs as well as the afternoon meetings.

– Helton also announced that safety John Plattenburg – who has been absent this spring – has retired from football after suffering a concussion in the Rose Bowl. He is, however, still taking classes at USC.

– Imatorbhebhe is likely to be out on Saturday as well, but he will be re-evaluated following spring break.

– Jacob Daniel (hamstring), Jake Russell (hip-flexor) and Keyshawn “Pie” Young (groin) were all pulled from practice due to injury.

– Though sidelined, Lobendahn did spend a good portion of practice running and working with a trainer.

– The complete No. 1 offense to start the first 11-on-11 period had Sam Darnold at QB, Ronald Jones II at RB, Deontay Burnett at WR, Michael Pittman Jr. at WR, Jalen Greene at WR, Tyler Petite at TE, Edoga at LT, Brown at LG, Smith at C, Talamaivao at RG and Hemsley at RT.

– In nickel situations Ajene Harris came in to cover the slot, with Rector heading to the sideline.

– With Matt Boermeester currently suspended and off the team roster while the university investigates a ‘code of conduct’ issue, Michael Brown has assumed placekicking duties this spring. On Thursday he appeared to miss half of his six attempts, with a long of around 45 yards.

“Just one day out here thus far, but what you see is a kid with a powerful leg that needs to be consistent, just truthfully,” Helton said. “On one shot he looks like an all pro, and on another it’s a little off-line. It reminds me of my golf swing.”

Helton said that Boermeester had similar issues early on at USC, but that he eventually got his kicks under control.

– Among those lauded by Helton for their performance on Thursday was wide receiver Velus Jones, who made a number of catches, while also showing off his explosiveness.

“You can see the speed just go by you,” Helton said. “And to be able to, whether it’s putting him deep, handing him the ball in space, throwing him the ball in space, you can see what he can do yards after the catch. He’s going to be a dangerous weapon, and hopefully will provide some speed kind of like Adoree’ did in that facet. I’m excited about him. He did some nice things today.”

– Iman Marshall came up with a highlight-reel interception during a one-on-one period, ripping the ball away from Tyler Vaughns on a deep pass along the sideline from Darnold.

– A little later Ajene Harris also came up with a pick, going up high to snag a ball away from V. Jones.

– During the same period Greene went up high to make a leaping grab along the sideline over J. Jones.

– The arguable play-of-the-day came during a 7-on-7 period when Ykili Ross picked off a Matt Fink pass outside and took it back for six.

– Among those in attendance on Thursday were former Trojans players Scott Felix, George Uko, Leonard Williams and Chris Willson as well as recent USC signees Greg Johnson and Joseph Lewis.

– Darnold hit Petite outside for a gain of 15 yards.

– Darnold tried to hit Greene outside, but J. Jones broke up the pass.

– Darnold tried to hit Burnett outside, but Nwosu deflected the pass.

– Jack Sears went deep to Vaughns, but Young deflected it.

– Darnold hit Burnett over the middle for a gain of close to 10 yards.

– Darnold hit Vaughns outside for a gain of around 10 yards.

– Fink hit Burnett over the middle for a gain of 7 or 8 yards.

– Fink hit Burnett over the middle for a 35-yard TD.

– Darnold hit Vaughns over the middle for a gain of close to 10 yards.

– Fink threw outside, but Connor Murphy batted the ball down.

– Darnold hit V. Jones over the middle for a gain of 25 yards.

– Darnold hit Greene outside for a gain of 10 yards.

– Fink hit Greene outside for a gain of 10 yards.