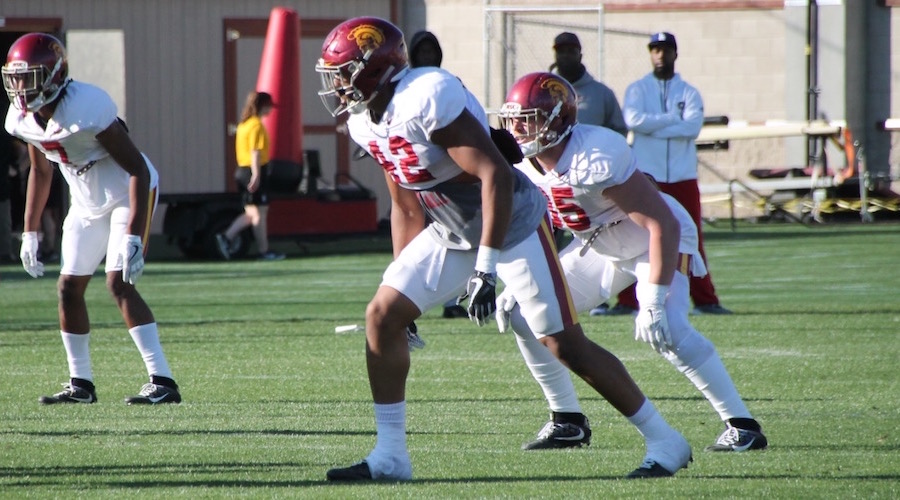 With the Trojans’ offense coming off a Tuesday performance that USC head coach Clay Helton called their finest of the spring so far, the defense came out fired up on Thursday, dominating the two-hour, full-pads session – even with veteran inside linebacker Cameron Smith sidelined for the second consecutive session with a neck injury.

Safeties Chris Hawkins and Matt Lopes, as well as linebacker Olajuwon Tucker all compiled interceptions on Thursday, and the entire defense played with a ton of energy right from the get-go.

“It started in team run and really carried into some situational football there at the end,” Helton said. “We really worked our four-minute drill, which is basically the end-of-the-game situation where the offense is up, and the defense has to get a stop. It kind of reminds you of the Rose Bowl with Penn State, that exact same situation, and the defense won both times, so a really, really good day by the defense.”

One player who helped to spearhead the stellar defensive effort was senior outside linebacker Uchenna Nwosu, who has been on a tear throughout the spring. Helton noted after practice that he isn’t surprised as much by the Harbor City (Calif.) Narbonne product’s performance this month, as he is by his growth in terms of the leadership that he’s been bringing to the table.

“I knew he was going to be a good player, but what I didn’t realize is how good a leader he is,” Helton said. “He’s really capturing this bunch. Stevie [Tu’ikolovatu] kind of had that role last year, [and] you kind of feel it coming on with Uchenna. He’s the lead dog. He’s the king of the lions.”

Another player who continued to shine was early-entrant freshman nose tackle Marlon Tuipulotu, who ran with the No. 1 unit ahead of Josh Fatu for the third consecutive practice.

“He’s just one of the more football instinctive kids I’ve seen,” Helton said. “Sometimes the light clicks on earlier for some freshmen, and he’s one of them. He’s really picked up the defense quickly. And you don’t see too many 300-pound men with his athleticism and his quick-twitch, and it’s just evident off the tape. It shows up each and every day.”

While Helton was obviously pleased by what he saw from the defense on Thursday, he clearly expects more from the offense.

“You’ve got to look at the other side,” Helton said, “and as good a day the offense had – by far their best day on Tuesday after watching the film –  we’ve got to do better than we did today.”

– Additionally, Taylor Katoa (knee), C.J. Pollard (ankle) and Viane Talmaivao (elbow) all went to the sideline with injuries during practice. Katoa will undergo an MRI to determine the severity of his injury.

– With so many player sidelined, Helton said that he will push the team’s next live scrimmage back to next Saturday.

– Tailback Dominic Davis (concussion protocol) suited up and took part in the entirety of practice for the first time this spring.

– With Talamaivao heading to the sideline, early-entrant freshman Andrew Vorhees took his place with the No. 1 unit at the right guard position. Vorhees had been spending his time with the No. 2 offense at right tackle up until today, but Helton noted that they have always planned to give him some reps at guard this spring.

“I have been really impressed with him,” Helton said of Vorhees. “He’s another kid, like Marlon, I did not anticipate being so far advanced at this age. He should still be in high school, but both of those kids are doing a nice job.”

– For the second straight practice Chris Brown lined up with the No. 1 offense at right tackle, with Roy Hemsley at left guard.

– Isaiah Langley spent the day with the No. 1 defense at the cornerback spot opposite Iman Marshall.

– With R. Jones and Ware sidelined, Vavae Malepeai ran with the No. 1 offense.

– Olajuwon Tucker took reps with the No. 2 defense at inside linebacker on Thursday. He had been lining up at the SAM outside linebacker spot this spring.

– The offensive play of the day was made by Michael Pittman Jr., who made a beautiful diving 15-yard touchdown catch in the corner of the end zone on a pass from Darnold.

– Sam Darnold hit Velus Jones down the sideline for a 35-yard TD.

– Darnold hit Deontay Burnett outside for a gain of close to 10 yards.

– Darnold hit Jalen Greene outside for a gain of around 10 yards.

– Darnold tried to hit Michael Pittman Jr. outside but Marshall made a nice pass break-up.

– Matt Fink hit Cary Angeline outside for a gain of close to 10 yards.

– Fink tried to hit Tyler Vaughns outside, but Jamel Cook stepped in front and broke up the play, nearly making an interception.

– Jackl Sears tried to hit Austin Applebee over the middle, but Hawkins was there to make the interception.

– Sears hit Jackson Boyer over the middle, but the receiver bobbled the pass and Tucker grabbed the ball for an interception.

– Fink tried to connect with Tyler Vaughns over the middle of the end zone, but Matt Lopes stepped in from for the interception.

– Darnold hit Malepeai outside for a gain of around 10 yards.

– Gustin and others stopped Malepeai for a loss.

– Rasheem Green busted through the line and dropped malepeai for a loss.

– Fink hit Josh Imatorbhebhe for a gain of 10 yards.