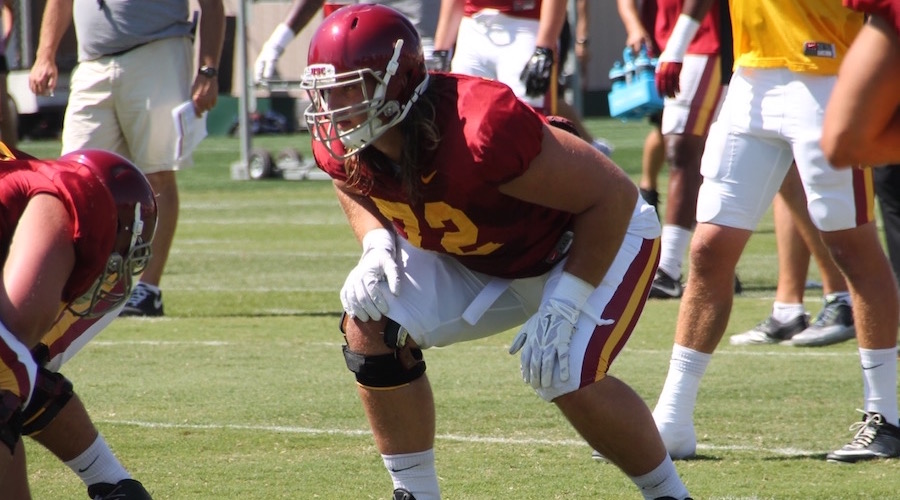 With USC head coach Clay Helton and Co. in the midst of a mock game week, the Trojans took part in a lighter, shorts-and-helmets workout that closely resembled what a typical Thursday practice will look like during the season.

There was a special emphasis placed on red zone situations, with the scout team defense doing its best to simulate some of the coverages that Max Browne and the Trojans offense are expected to see when they face Alabama.

Having spent this entire week focusing on the Crimson Tide, the Trojans will take part in a closed mock game on Saturday before getting all of next week to prepare for Alabama as well.

“I’m thanking the good Lord that we have five more [practices],” Helton said. “This week has really put us ahead in my mind, but when you’re playing the defending national champion and the No. 1 team in the country, I’ll take two weeks, no question.”

Wheeler gets some work in

Having been sidelined for the past two weeks due to plantar fasciitis, Chad Wheeler returned to action and got some brief work in on Thursday. The big offensive lineman took part in individual drills, as well as an early team walkthrough period in which he took some reps with the No. 1 offense at his normal left tackle spot.

Helton is obviously hoping Wheeler will be healthy and ready to go when USC faces Alabama.

“[He] went through it with no pain, so that’s a good sign,” Helton said. “Over the next two days we’ll see how that progresses, then bring him back next week, then see how he is full-speed, and see if he would be ready.”

During that initial walkthrough period USC offensive line coach Neil Callaway did quite a bit of mixing and matching, with both Chuma Edoga and Zach Banner seeing time at right tackle with the No. 1 group.

Throughout the remainder of the day Edoga lined up exclusively at left tackle, while Banner remained at right tackle all the way up until the final 11-on-11 period when he had to leave for a class, with Jordan Simmons filling in at his spot.

– Among those who did not participate in practice were Jamel Cook (foot) and John Plattenburg (concussion).

– Marvell Tell (hamstring) continued to get more work in on Thursday, taking part in almost the entire practice session. He ran with the No. 1 defense for much of the day at one safety spot, with Chris Hawkins manning the other safety position.

– The entire base defensive unit to start the day had Porter Gustin at Predator OLB, Uchenna Nwosu at SAM OLB, Rasheem Green at DE, Stevie Tu’ikolovatu at N, Malik Dorton at DE, Cameron Smith at MIKE, Michael Hutchings at WILL, Adoree’ Jackson at CB, Iman Marshall at CB, Hawkins at S and Tell at S.

– When the defense went into a nickel alignment, Leon McQuay III came in to cover the slot, and Green went out.

– Jackson came up with the play of the day on defense, leaping up high to intercept a Matt Fink pass in the corner of the end zone during a 7-on-7 red zone period.

– Max Browne had a good day in the red zone, hitting, among others, JuJu Smith-Schuster, Isaac Whitney and Jalen Greene for touchdowns.

– During a punt team period Chris Tilbey got a couple really nice boots off. Following practice Helton noted that the competition between Tilbey and Reid Budrovich is still ongoing, and that ultimately, the final decision will be left entirely up to Special Teams Coach John Baxter.

“At the end of the day I think Bax will make a good call, and we may use both of them in a game,” Helton said. “I’ll rely on Bax for that. He’s the master of it.”

– NFL scouts were in attendance from the Chicago Bears, Detroit Lions and Jacksonville Jaguars.

– Browne hit Mitchell over the middle for 15 yards.

– Browne hit Smith-Schuster for a gain of over 20 yards.

– Browne hit Smith-Schuster outside for a 10-yard TD.

– Fink found Trevon Sidney outside for a 15-yard TD.

– Jackson picked off Fink’s pass in the corner of the end zone.

– Darnold hit Whitney in the end zone for 15-yard TD.

– Browne connected with Greene for a 15-yard TD.

– Fink connected with Angeline downfield for a big gain.

– Hampton jumped up high over Jalen Jones to haul down a 10-yard TD pass from Darnold.

– Browne hit Justin Davis outside for a gain of close to 10 yards.

– Browne hit Mitchell outside for a gain of 8 or 9 yards.

– Darnold tried to hit Josh Imatorbhebhe outside, but Marshall broke up the play.

– Darnold found Angeline over the middle for a long touchdown.