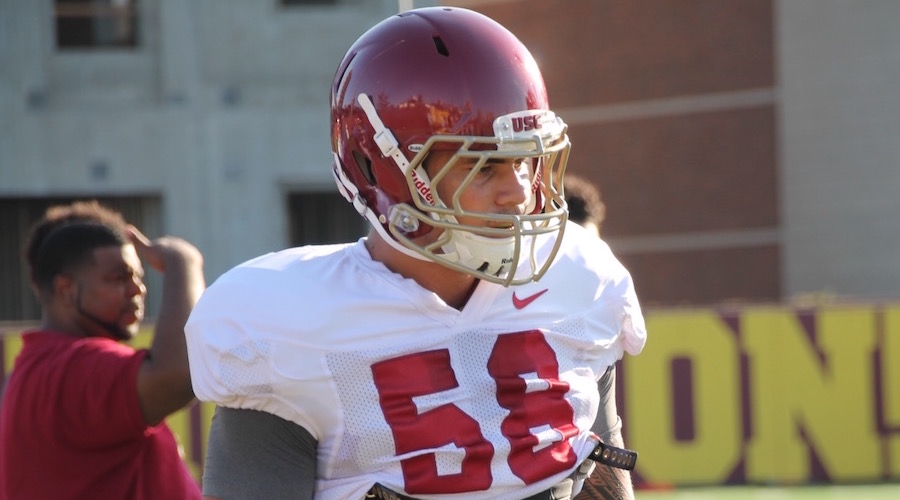 The Trojans were in shorts, shoulder pads and helmets on Thursday, and for the second consecutive day there was a special emphasis on situational work. This time around the focus was on preparing the Trojans for some of the more physical, grind-it-out teams on the schedule – particularly early in the season.

“We worked a lot of two-tights, two-back offense for us, both offensively and defensively,” Helton said. “I thought it was ultra important. Obviously, you’re going to see that type of downhill running, smash mouth running from Alabama, from Stanford and those personnel groups. So to be able to get some work at that today I thought was imperative.”

In keeping with that early-season theme, Helton said that the defense also spent time gearing up for some of the unique offensive systems that they will face.

“We also practiced some of the unusual sets that we’re going to see in the first four games,” Helton said, “some of the unique motions, unique unbalanced sets that people throw at you and you have to be prepared for.”

Arriving at USC this summer with the idea of providing some help to a Trojans defensive line corps that was searching for a boost in depth and talent, Utah graduate-transfer Stevie Tu’ikolovatu has made an even faster impact than most might have imagined.

Not wasting any time, the 6-foot-1, 320 pounder made his presence felt right from Day 1, and after taking some periodic reps with the No. 1 unit early on in camp, he’s now been running almost exclusively with the first unit at nose tackle since this past Sunday.

“I go to bed thanking the Lord that he’s on our football team because he’s really making a huge difference for us,” Helton said. “We knew he was a good player. You can see it on tape, what he was doing at Utah. He’s a load, especially in the run game. What I didn’t anticipate is his pass rushing skill. He’s really strong with his hands, and he does a great job of throwing guys around.”

Helton has also repeatedly brought up Tu’ikolovatu’s maturity, not only for how it’s helped the defensive line group on the field, but also in the meeting room.

“As I’ve said before, he’s a 25-year-old man with a wife,” Helton said. “He really has a focus of what he wants to do. He wants to help this team win a championship, and move on to the next level. And that’s why he came here.”

Another player who appears to be making a move is Osa Masina. The sophomore from Salt Lake City (Utah) Brighton ran with the No. 1 group at the WILL inside linebacker position for the second consecutive day.

Extremely active throughout the two-and-a-half hour practice, he was involved in a number of tackles near the line-of-scrimmage, and he also broke up at least two passes in coverage.

“He’s doing a nice job,” Helton said. “He’s starting to pick things up a little bit faster. You remember in the spring he was a little bit limited. Now he’s full-go, and as he gets more comfortable within the system and gaining those reps, you can see a comfort level coming about. I’m very pleased with Osa.”

– Helton said that Tell’s hamstring injury is just a light strain, and that he should be back in action, ‘in a week or so.’

– Helton also said that both Hawkins and Lopes are close to making a full return.

– Wide receiver Jalen Greene (hamstring) was limited, taking part in individual drills only. Helton said that he is at 90 percent.

– Outside linebacker Jordan Iosefa went out late with an ankle injury, but Helton does not believe it to be serious.

– JuJu Smith-Schuster went down and clutched his knee in the final 11-on-11 period, but he was moving well soon afterwards and he told the media that he was just testing the training staff to see how long it would take them to get to him.

– Earlier in the day Smith-Schuster had a pair of outstanding grabs during a one-on-one period. On one rep he showed off his speed by beating Ajene Harris and hauling in a deep pass along the sideline. A little later he did a nice job of making a grab outside despite tight coverage from Iman Marshall.

– With Wheeler out, Zach Banner, once again, slid over to left tackle with the No. 1 offense, with Chuma Edoga going at right tackle. Edoga went to the sideline late during Wednesday’s workout with a toe injury, but he did not appear to be hampered at all today.

– The complete No. 1 offense to start the day had Max Browne at QB, Justin Davis at TB, Taylor McNamara at TE, JuJu Smith-Schuster at WR, Darreus Rogers at WR, Steven Mitchell Jr. at WR, Banner at LT, Chris Brown at LG, Toa Lobendahn at C, Viane Talamaivao at RG and Edoga at RT.

– When the defense went to the nickel set, Green came out at DT, and Deion Hart went in at S, with McQuay covering the slot.

– Freshman cornerback Jack Jones had the hit of the day, drilling Dominic Davis after the speedy tailback took a quick pass outside. One play later, however, davis got revenge, taking a handoff and losing Jones with a juke before bouncing outside for a big gain – with the entire offensive sideline erupting in cheers.

– Jackson just missed out on an interception, dropping a pass thrown by Browne that he had nice position on.

– Ronald Jones II showed off his explosiveness, bouncing a run outside and breaking loose for a 40-yard touchdown.

– Browne connected with Deontay Burnett for a 40-yard touchdown.

– For the second consecutive day placekicker Matt Boermeester had a very strong practice session, connecting on 7-of-8 field goal attempts, with a long of 50 yards.

– Also on hand were NFL scouts from the Atlanta Falcons and New York Jets, as well as a large group of players from nearby Los Angeles (Calif.) Loyola.

– Browne hit Rogers over the middle for close to 10 yards.

– Browne tried to hit Tyler Petite over the middle, but Masina got a hand on the ball and it fell incomplete.

– Browne tried to hit Isaac Whitney outside, and Jackson couldn’t quite pull it in for an interception.

– Sam Darnold hit Cary Angeline over the middle for a gain of close to 20 yards.

– Browne hit Mitchell over the middle for a gain of 8 yards.

– Browne threw over the middle, but Masina was there to deflect it,

– Browne hit Burnett over the middle for a 40-yard TD.

– Darnold hit Josh Imatorbhebhe over the middle for a gain of 7 or 8 yards.

– Browne went deep to Smith-Schuster, but McQuay broke it up.

– Masina stopped Jones for no gain.

– Darnold went deep to Michael Pittman, but Ajene Harris broke it up.

– D. Davis ran outside for a gain of 11 or 12 yards before Masina made the stop.

– Uchenna Nwosu batted down Darnold’s pass at the line.

– Browne hit Jones outside for a gain of 5 or 6 yards before Harris made the stop.

– Browne hit Peters outside for a gain of 5 yards.

– Browne hit Tyler Vaughns over the middle for 7 or 8 yards.

– Darnold hit Jones outside for a gain of 5 or 6 yards.

– Browne hit Peters outside but Jack Jones levels him.

– D. Davis puts a nice juke on Jones and breaks loose for a big gain.