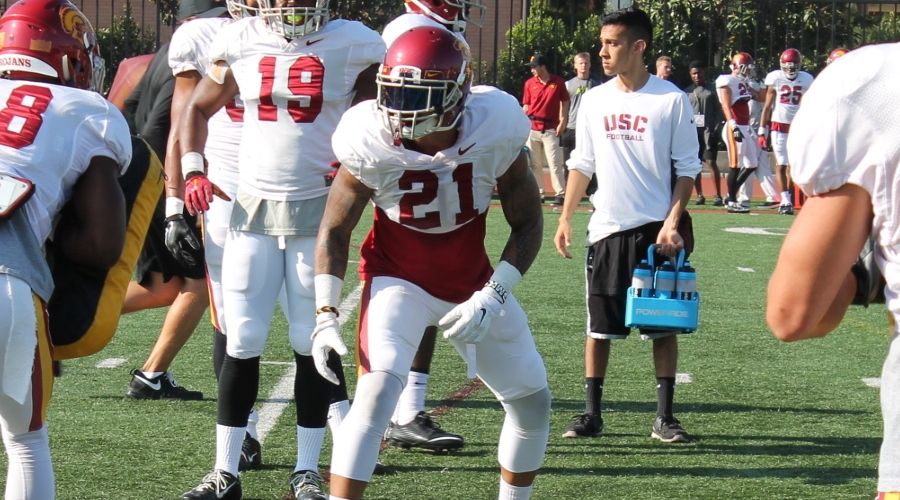 With the spring game coming up on Saturday, the Trojans practiced in shorts and helmets on Thursday, but that doesn’t mean that the players took it easy. On the contrary, it was a session marked by plenty of competition, with a swarming and determined defensive bunch getting the better of the offense for the most part.

Buoyed by the return of Adoree’ Jackson to cornerback, and with revenge on their mind after getting torched by Cody Kessler and Max Browne during Tuesday’s workout, the defense started out strong and never let up, capping practice off with a dominating effort in the final five-play challenge. With the offense lined up going for a two-point conversion, the defense defeated the offense on three consecutive plays, with cornerback Kevon Seymour making two key pass breakups in the sequence.

Following practice USC head football coach Steve Sarkisian said that he was encouraged by what he saw from the defense, and in particular, the way that they rebounded after a tough Tuesday.

“I really think the sign of a good team is the pride factor,” Sarkisian said. “I think our defense, one, they get Adoree’ back, and two, the pride factor. They didn’t like it, and they stepped up today.”

No one played a bigger role in the defense’s overall performance on Thursday than Su’a Cravens, who was all over the field. The junior linebacker intercepted two passes, including a pick-six as well as a one-handed grab, and he also compiled at least three sacks.

“I thought Su’a had another great practice,” Sarkisian said. “A just phenomenal one-handed interception, and rushing the quarterback, but he’s been doing it every day so sometimes it’s hard to appreciate how good he’s been playing. Never mind All-Conference, he’s playing like a Player of the Year type guy, which is really cool.”

Boermeester and Wood have busy day

One of the more intriguing position battles of the spring has been at placekicker, where Matt Boermeester and Alex Wood have been duking it out for the right to take Andre Heidari’s place.

Both players got plenty of work in on Thursday, with each connecting on crucial 43-yard field goal attempts during an early two-minute drill period. A little later, however, Boermeester and Wood both missed some long attempts during a special teams period, and Sarkisian noted that it’s still too early to single a leader out.

“We’ve got a long way to go,” Sarkisian said. “We’re giving these guys every chance to do it. I was pleased that both of them stepped in at critical scenarios in the two-minute drill, and both made their kicks. We really backed them up today on some long ones – we struggled a little bit there. So, we’ve got work to do. We’re not making any hard and fast decisions right now.”

The Trojans had a special visitor on Thursday in former Trojans quarterback and current Philadelphia Eagle Mark Sanchez.

Sanchez, who played at USC from 2005-08, asked to come out to practice after seeing Sarkisian – his former quarterbacks coach – at a recent event. Spending the entire practice session with the quarterbacks, it was obvious that both Sanchez, as well as the Trojans players and coaches, enjoyed the visit.

“It was great having him out,” Sarkisian said. “He and Cody actually have really good rapport. It was fun having him out. We’re going to visit next week on some X’s and O’s, so it was good having him.”

– Defensive lineman Claude Pelon returned after missing this past Tuesday’s workout due to academic obligations. He did have a brace on his left shoulder, which he tweaked this past Saturday, but he took part in the entirety of practice and said that he would participate in the spring game.

– Chris Hawkins and Leon McQuay ran with the No. 1 defense at the two safety spots. John Plattenburg, who was limited this past Tuesday due to an ankle injury, lined up with the No. 2 group alongside Matt Lopes.

– With Khaliel Rodgers back, once again, at center with the No. 2 group, Toa Lobendahn continued to line up at left tackle with the No. 1 offense.

– Sarkisian was asked who the return men might be in 2015, and he mentioned Jackson and Steven Mitchell as potential punt returners, and JuJu Smith, Tre Madden, Justin Davis and Seymour as possible kick returners, while noting that some freshmen, such as Ronald Jones and Isaiah Langley, could also enter the mix.

– Sarkisian said that Jackson will play on both offense and defense on Saturday, although just how much time he spends on each side hasn’t been determined.

– Sarkisian said that he will release a depth chart for the spring game on Friday.

– Davis ran through a big hole created by Toa Lobendahn and Damien Mama and broke loose for a big gain.

– Kessler connected with Darreus Rogers outside for a 15-yard gain.

– Max Browne found Isaac whitney over the middle for a gain of close to 10 yards before Plattenburg made the stop.

– Browne hit Ajene Harris with a quick strike over the middle, and Harris broke loose for five or six more yards. 15-yard gain on the play.

– Kessler went deep to Smith along the sideline, but Seymour defelected the pass.

– Kessler connected with Mitchell over the middle for around 10 yards.

– Browne found Robby Kolanz outside for a pickup of 10 yards.

– Browne connected with Cope-Fitzpatrick for a 20-yard gain with Quinton Powell in coverage.

– Kessler rolled out and found Smith downfield for a 25-yard gain before Hawkins made the stop.

– Kessler tried to hit Connor Spears over the middle, but Hawkins broke the pass up.

– Kessler tried to hit Mitchell over the middle, but Jackson and McQuay were there to break up the pass.

– Cody Temple and Co. stopped Soma Vainuku for no gain.

– Kessler hit Vainuku outside for a 10-yard pickup.

– Browne hit Mitchell over the middle for a 50-yard touchdown pass.

– Powell deflected a Ricky Town pass at the line.

– Browne went to Whitney in the corner of the end zone, but Lockett broke up the pass.

– Browne connected with George Katrib in the corner of the end zone for a 15-yard touchdown.

– Rogers made a beautiful 15-yard grab over Jackson in the corner of the end zone on a pass thrown by Kessler.

– Jalen Greene hit Ajene Harris over the middle with Lamont Simmons in coverage for a 25-yard touchdown.

– Town connected with Harris outside for a 15-yard touchdown.

– Kessler hit Smith with a quick shot over the middle, but Jackson was there to stop the play for a short gain.

– Kessler tried to slip a quick pass over the middle to one of the running backs, but Cravens was there to pick it off and take it to the house.

– Browne tried to hit Kolanz over the middle, but Simmons deflected the pass.

– Kessler tried to connect with Smith outside but, but Cravens made a fantastic leaping, one-handed interception.

– Kessler hit Smith outside for 10 yards.

– Greene tried to hit Aaron Minor, but Cameron Smith broke up the pass.

– Town connected with Cope-Fitzpatrick outside for a gain of close to 10 yards.

– In the final challenge, Kessler tried to hit Smith outside but Seymour broke up the pass.

– Tre Madden appeared to get stopped short of the goal line.

– Kessler again tried to connect with Smith outside, but again Seymour was there to break up the play.