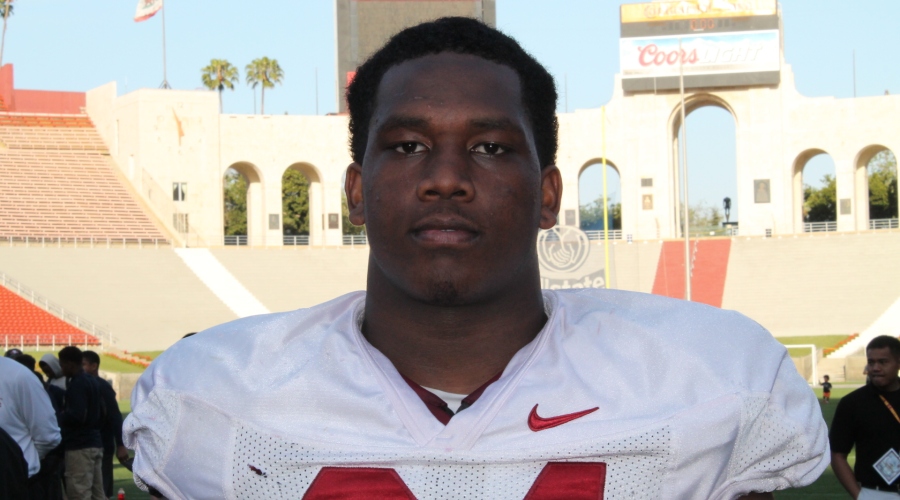 The Trojans were back in the Coliseum on Thursday, with the highlight of the team’s shorts, shoulder pads and helmets practice session coming during a late period that had the offense pinned up against their own end zone, with the goal being to work their way out.

The offense dominated the first two series’ with Steven Mitchell, Adoree’ Jackson and Jalen Cope-Fitzpatrick making clutch grabs. Near the end, however, it was the defense that came up with the big plays, with nose tackle Cody Temple recording a sack in the end zone, and Cameron Smith stepping in front of a Max Browne pass and returning it for a pick-six.

“It was really cool to see the offense execute it right,” said USC head coach Steve Sarkisian, “but then when the offense made their mistakes, the defense capitalize and make plays and score points, which is what you love to do when you have a team backed up in that scenario.”

The defense also got the last laugh in the three-play final challenge that capped the practice off. Lined up facing the end zone in a two-point conversion situation, and with the score tied up at 1-1, Cody Kessler fired over the middle but Lamar Dawson was there to break up the pass.

For Dawson, who is back in action after missing the 2014 campaign due to a knee injury, it was the latest in a string of standout plays that the senior inside linebacker has made this spring.

“I think it just reiterates what we’ve been seeing out of Lamar,” Sarkisian said. “He’s been a really active player for us. A guy who just continues to show up and do those things that we think he’s capable of doing.”

Dawson isn’t the only linebacker who shined on Thursday. Having come up with his second pick-six of the spring, Smith was also lauded by Sarkisian after practice, and Olajuwon Tucker, who deflected a Browne pass that was picked off by Michael Hutchings, was singled out as well.

With fifth-year senior Anthony Sarao sidelined for the entire spring with a foot injury, Tucker has filled in at will linebacker with the No. 1 defense in recent days and performed well. The sophomore out of Gardena (Calif.) Serra also spent some time at rush end with the first team on Thursday.

“You know what I’ve seen out of Olajuwon is that he’s changing his body,” Sarkisian said of Tucker, who is listed at 6-foot-3 and 220 pounds. “He came in as a little bit of a softer, longer guy. He’s really hardened himself up, which has helped him become more explosive. He’s studying, which is allowing him to become versatile. He’s been playing inside [and] we put him outside today and let him rush the passer some. He showed up there, so that was encouraging.”

Both Tucker and Smith – listed at 6-3 and 240 pounds – are bigger than the typical linebackers that USC has put on the field as of late, and Sarkisian also pointed to incoming freshmen Porter Gustin, John Houston and Osa Masina as examples of larger linebackers who were recruited with a specific purpose in mind.

“In our conference we get spread out so much, and our linebackers get put in a lot of one-on-one scenarios to shed blocks off of guards, and then get off the blocks and make those plays and make those tackles, and we want to be able to make those tackles for no-gains or gains of one or two – not gains of four, five or six,” Sarkisian said. “I think a bigger, more physical ‘backer inside allows us to do that. I think we’ll see over time as the years go on a little bit of a shift, philosophically, of how we want to play defense.”

– Center Khaliel Rodgers sat out the session on Thursday due to a prior shoulder injury that flared up on Tuesday.

“We’ll see how it progresses, and exactly what we do with it, but I think we’ll see him back,” Sarkisian said.

– During the time period when Tucker lined up at rush end with the No. 1 defense, Michael Hutchings took his spot with the ones at will linebacker.

– Adoree’ Jackson spent the day at wide receiver and had an outstanding day there, catching everyone’s attention early with a beautiful diving catch. In his absence on the defensive side of the ball Jonathan Lockett lined up with the No. 1 group at the cornerback spot opposite Kevon Seymour. John Plattenburg and Chris Hawkins were the two starting safeties.

– In addition Smith and Hutchings, safety Matt Lopes also had an interception on Thursday.

– On offense, in addition to Jackson, others who stood out were Darreus Rogers, JuJu Smith, Steven Mitchell and Soma Vainuku.

– The team spent some time working on kickoff coverage early on, with both Matt Boermeester and Alex Wood handling kicking duties. Jackson and Justin Davis were the primary returners.

– Seymour opened up the first 11-on-11 period by breaking up a Kessler pass.

– Kessler hit Mitchell over the middle for a gain of close to 15 yards before Seymour made the stop.

– Quinton Powell came in and batted down a Browne pass.

– Browne rolled out and found Smith for a gain of 15 yards.

– Kessler completed a pass to Rogers for a gain of around 20 yards, despite tight coverage by Lockett.

– Kessler hit Mitchell with a quick pass outside, but Cravens came up in a hurry and stopped the play for no gain.

– Jackson made a diving grab outside on a pass thrown by Kessler for a gain of around 10 yards.

– Vainuku cut outside and rumbled for a gain of close to 10 yards before Leon McQuay III made the stop.

– Browne connected with Robby Kolanz outside for a gain of 15 yards.

– Kessler hit Mitchell outside for a gain of around 20 yards.

– Scott Felix stopped Davis for no gain and threw the tailback on the ground with a little more force than Sarkisian would have liked.

– Kessler hit Smith over the middle for a gain of close to 20 yards with Seymour in coverage.

– Kolanz got past Lamont Simmons, and Browne hit him deep for a 40-yard gain.

– McQuay blitzed a tipped a Browne pass away.

– Browne hit Rogers for a gain of 10 yards before Smith stopped him.

– Kessler hit Rogers for a gain of close to 30 yards before Hutchings made the stop.

– Jalen Greene connected with Davis outside for a gain of seven or eight yards.

– Town hit Vainuku over the middle for a gain of 10 yards.

– Lopes stopped Vainuku for no gain.

– Browne connected with Vainuku for a gain of 10 yards.

– Davis with a nifty run, weaved his way through traffic for a gain of close to 10 yards.

– Browne hit Jackson outside for a gain of around 15 yards with Simmons in coverage.

– Browne hit Jackson for a gain of close to 10 yards before McQuay made the stop.

– Browne connected with Cope-Fitzpatrick for a gain of eight or nine yards.

– Temple with the sack on Kessler in the end zone.

– Smith with the pick-six on a pass by Browne.

– Kessler hit Rogers in the corner of the end zone for a score.

– Kessler threw over the middle, but Dawson was there to break it up.