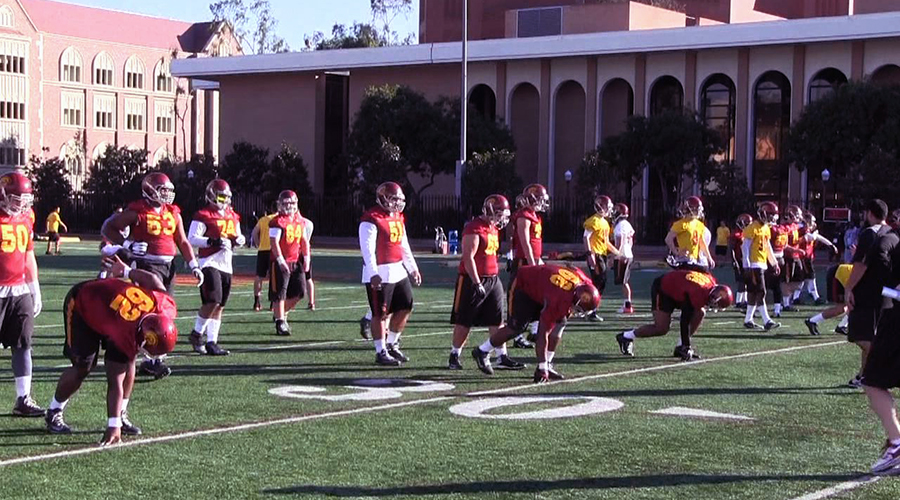 It was Day 2 of spring ball for the Trojans on Thursday, with the team taking part in a shorts-and-helmets practice session on Cromwell Field that was dominated by the defense.

“I thought the defense came out with really good energy from the start, and then finished with great energy,” said USC head coach Steve Sarkisian. “I thought they really played well.”

There were quite a few highlight-reel plays made by defensive coordinator Justin Wilcox’s bunch, with Delvon Simmons, Claude Pelon and Scott Felix making their presence felt up front, and the entire secondary more than doing their part as well.

John Plattenburg ended practice on a high note, forcing an incompletion on a Cody Kessler pass attempt to Steven Mitchell, and the sophomore safety received plenty of praise from Sarkisian afterwards.

“I thought John Plattenburg has been a guy I probably should have mentioned after Day 1, just with his maturity and his body changing, it showed again today,” Sarkisian said. “He made a heck of a play on the last play to knock the ball loose to win the period three plays to two for the defense.”

As is commonly the case this early in the spring, the offense isn’t playing at quite the same level that the defense is right now.

“From an offensive standpoint, you can kind of tell after two days of installation it’s a little too slow for our liking,” Sarkisian said. “We’ve got a lot of people kind of doing some new things, so it’s taking a minute just getting lined up. We need to improve upon our efficiency that way getting into Saturday and into next week.”

Still no Dixon on hand

Sophomore tight end Bryce Dixon was not in attendance for the second consecutive day of spring practice due to a student-conduct issue, and Sarkisian said that he had no new update to provide regarding the matter.

In his absence, the Trojans again had just two tight ends available in redshirt junior Jalen Cope-Fitzpatrick and third-year sophomore walk-on Connor Spears. With so few bodies at the position, Sarkisian admitted that it has been a struggle at times.

“We only have two tight ends in a system that, essentially, relies on playing with a tight end just about on every snap,” Sarkisian said. “It can be challenging for us, and we ran into a little bit of that today. When I talk about the tempo, we went to some more four-wide sets to give those guys a breather, and in turn we had some communication issues with substitutions.”

Sarkisian said that the Trojans could possibly continue to tinker with more four and three wide receiver sets this spring in an effort to look at every option available, but that the tight end always figures to play an important role in his offense.

“We don’t want to lose our run-game – that’s important to us with the tight end on the field,” Sarkisian said. “We’ll see. I had to do this one year at Washington for a variety of reasons. We went with more of a three-wide receiver, two-back set – the second back being a fullback that was really versatile. We’re fortunate to have Soma [Vainuku] and Jahleel [Pinner] that could potentially do that as well. We’re just in the beginning stages of figuring out the personality of this team, and getting an idea of who we are and what we can be, but we have to look at all of those possibilities.“

While Dixon’s status still appears to be up in the air, Sarkisian did note that help is on the way in the form of recent Class of 2015 tight end signee Tyler Petite, who was in attendance at practice on Thursday. Additionally, the Trojans head coach noted that three other members of USC’s recent recruiting haul, Porter Gustin, Osa Masina and Christian Rector, are versatile enough to possibly line up at tight end, even though they are currently slated to play on defense. Incoming walk-on Caleb Wilson will also provide depth, and Sarkisian said that tight end Chris Willson, who suffered a season-ending foot injury in the 2014 opener, has applied for a sixth year of eligibility. There is always a chance, however, that if Willson gets the extra year, that he could opt to play at another school.

– Sarkisian said that linebacker Anthony Sarao will miss the entire spring due to a small crack in his foot.

“It’s going to take probably a good 6 to 8 weeks,” Sarkisian said. “I know he could play, but we want to make sure that thing heals, and heals properly so that when August rolls around it’s 100 percent and we’re not dealing with it.”

– Sarkisian revealed that defensive lineman/outside linebacker Charles Burks has graduated and has chosen to spend his final season of eligibility at another school.

– Adoree’ Jackson spent the day at slot receiver. USC head coach Steve Sarkisian said that Jackson will continue to rotate days between receiver and cornerback at least for the next week-and-a-half this spring.

– Wide receiver Steven Mitchell spent most of the day lined up outside, but he also continued to take some reps in the slot as well.

– There was a spirited one-on-one period between the offensive linemen and the defensive linemen at one point. Freshman right tackle Chuma Edoga turned some heads when he beat defensive end Claude Pelon on two consecutive plays.

– Sarkisian said that JuJu Smith will not spend any time on defense this spring.

“He’s just so good offensively, and then with the departure of Nelson [Agholor] and George [Farmer], even though he’s only in his second year, he’s about our most veteran guy with the experience and playmaking ability, and we can’t just afford not to have him offensively.”

– Kessler hit Justin Davis over the middle for a gain of around 15 yards before Leon McQuay III made the stop.

– Simmons applied pressure on Kessler, whose pass attempt was nearly picked off by Pelon.

– Plattenburg stopped Davis for no gain.

– Max Browne connected with Cope-Fitzpatrick for a gain of close to 10 yards.

– Browne hit Christian Tober over the middle for a 10-yard touchdown pass.

– Matt Lopes had a great diving interception on a Kessler pass over the middle.

– Kessler swung a pass out to Mitchell, but Plattenburg came up in a hurry and stopped him for a loss.

– Su’a Cravens provided pressure on Kessler, and Pelon batted his pass attempt down.

– Soma Vainuku ran for a gain of close to 10 yards.

– Browne tried to hit Ajene Harris over the middle, but Cameron Smith tipped the ball away.

– Greene connected with Mitchell over the middle, who broke loose for a long touchdown.

– Kessler hit Mitchell over the middle for 15 yards.

– Kessler connected with Harris for a gain of 15 yards.

– Vainuku ran for around four yards before Malik Dorton leveled him.

– James Toland IV ran outside for a gain of close to 20 yards.

– McQuay broke up a Kessler pass intended for Jackson.

– Kessler threw a strike to Mitchell, but Plattenburg came up and jarred the ball loose to force the incompletion.