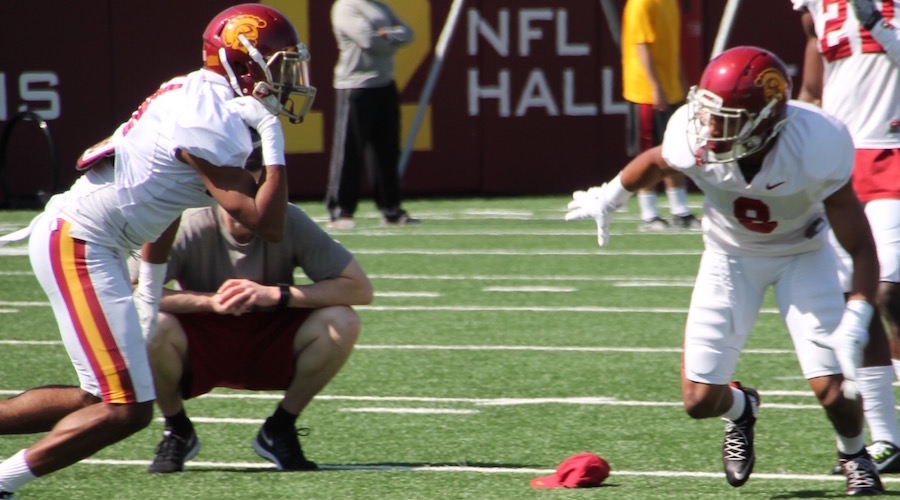 The pads were popping on Brian Kennedy-Howard Jones Field on Thursday, as the Trojans took part in what was arguably the most physical practice session of the spring so far.

The two-hour workout ended in fitting fashion, with the offense facing the defense in a final best-of-five-play challenge that consisted entirely of short yardage, 3rd-and-2 situations.

Tailback Justin Davis opened up the period by darting off the right side for a gain of close to 10 yards, sending the offense into a frenzy, with right tackle Zach Banner calling the defense out before announcing, “We’re going to do it again. Same play!”

The defense actually stopped Davis short of the first down on the ensuing play, but the offense would take the next two reps to earn the victory. Damien Mama leveled a blitzing Quinton Powell on play No. 3 before Davis ran loose for a gain of over 20 yards, and on the final play, Ronald Jones II fought hard to run through a pack of defenders for a five-yard gain, giving the offense a 3-1 victory.

“That period is about running the ball when you must,” said USC head coach Clay Helton. “We’re a balanced offense, and then at the end of the game you’ve got to run the ball when you must to win the game. We literally said, ‘here comes power right, right here. Let’s stop it.’ And Justin makes a great run, [and] the offensive line does their job.”

Helton said that instilling that tough, physical mindset within the offensive line became a priority as soon as he took over as USC’s interim coach this past October, and judging by the unit’s performance on Thursday, all of the hard work is starting to pay off.

“When we had our opportunity to take over at the middle of the season, we wanted to produce toughness,” Helton said. “We wanted to be able to run the ball when we had to at the end of games. At Cal, we ran it six times in a row to end that football game. Against UCLA, an 11-play drive, and 10 out of the 11 plays were runs to finish the game. Colorado, having to run that ball three times in a row for that first down and finish the game. That’s the belief you have to have. We were not a finished product, and that’s what I challenged them with. We went up against a Stanford team in the Pac-12 championship game and didn’t get it done against a team that was more physical than us. That’s what this spring is about, getting that offensive line as physical as humanly possible.”

Not all of the news coming out of Thursday’s practice was positive. During the first 11-on-11 period of the day, which was focused on the run game, defensive lineman Kenny Bigelow went down with a right knee injury, and after spending some time at the trainers’ table, he was carted off the field. Helton said that the fourth-year junior will undergo an MRI on his knee Thursday night.

Having missed the 2014 season after tearing the ACL in the same knee, Bigelow came back and saw action in a reserve role this past season in 13 of the Trojans’ 14 games. Having a strong spring so far, he’s been running consistently with the No. 1 unit at defensive end, and Helton didn’t mince words when discussing his importance to the team.

“You’re talking about a guy that has just been a rock for us in the offseason – with how hard he’s worked to get back after a season-ending injury,” Helton said. “We’ll all be saying our prayers tonight for him. He’s very much a leader of our team, and we need him.”

With Bigelow out, and nose tackle Noah Jefferson already sidelined with a back injury, the Trojans featured a starting interior defensive line group throughout much of Thursday’s practice that had Rasheem Green at one defensive end spot, Malik Dorton at the other defensive end position, and Jacob Daniel at nose tackle.

The No. 2 defensive line group was comprised of early-entrant freshman Liam Jimmons at nose tackle, with Christian Rector and Kevin Scott at the two defensive end positions.

– Wide Receiver JuJu Smith-Schuster did not practice as a precautionary measure due to a tight hamstring.

– Jefferson underwent an MRI on his injured back on Wednesday, but Helton said that it didn’t show anything. He will undergo a CT Scan next, but Helton did note that he is being held out right now primarily as a precautionary measure.

– Linebacker Osa Masina (hamstring) continued to work on the side with a trainer during practice.

– Tight end Tyler Petite is currently out due to a concussion. Helton said that he hopes to have him back next week.

– Early-entrant freshman receiver Michael Pittman has a slight crack on his collarbone. He will likely be withheld from contact throughout the remainder of the spring. Pittman originally broke the same collarbone this past January during U.S. Army All-American Bowl practices.

– After running with the No. 2 offensive line group on Tuesday, Viane Talamaivao and Damien Mama were back with the No. 1 unit on Thursday, with Talamaivao going at right guard, and Mama lining up at left guard.

– Banner spent the majority of the day with the No. 1 unit at right tackle, but as he’s done throughout the spring, he also took some limited reps at left tackle – where Chad Wheeler primarily lines up – as well. Following practice Helton said that Banner is competing for the starting job at both spots.

– After missing Tuesday’s practice due to a scheduling conflict with a class, Leon McQuay III returned on Thursday and ran with the No. 1 unit at safety alongside Marvell Tell. Both McQuay and cornerback Jonathan Lockett came up with blocked kicks during a special teams period.

– During an early one-on-one period in the red zone, Darreus Rogers made a beautiful diving grab on a pass thrown by Max Browne. A little later, Ajene Harris made a great catch over McQuay in the corner of the end zone on a pass from Jalen Greene. With Smith-Schuster sidelined, both Rogers and Harris had strong showings.

– Linebacker Olajuwon Tucker had the arguable hit of the day, taking down Aca’Cedric Ware hard at the line-of-scrimmage during the initial 11-on-11 period. Tucker also had an excellent diving pass break-up in a 7-on-7 period later on.

– USC defensive coordinator Clancy Pendergast said that he intentionally has watched no film on last year’s Trojans team, so that everyone has a fresh start.

– Adoree’ Jackson was at practice observing on Thursday.

– Former Trojans players Darnell Bing and J.R. Tavai were also among those in attendance.

– USC will next practice in the Coliseum on Saturday at 10 a.m.

“I think we’ve put five good days in,” Helton said. “Now it’s time to take it to the park, to get to the Coliseum on Saturday, and to really put these guys in some real, live situations – actual game situations, and see who produces, and who really moves the ball down the field as a quarterback, who does their assignments as a defensive player. I’m really looking forward to seeing that, so it ought to be a lot of fun on Saturday.”

– Uchenna Nwosu stripped the ball from Jones, with Tell scooping it up and returning it for a touchdown.

– Ware ran outside for a gain of over 20 yards.

– Sam Darnold hit Daniel Imatorbhebhe with a quick pass outside, but Matt Lopes came up and made the stop in a hurry.

– Browne connected with D. Imatorbhebhe outside for a gain of around 10 yards.

– Jones ran inside for a gain of 5 yards before Tell made the stop.

– Jimmons and a host of other stopped Jones after a short gain.

– Darnold fumbled the snap, and Oluwole Betiku made the recovery.

– Jones ran outside for a 40-yard touchdown.

– Dorton tackles Jones for a loss.

– Darnold connected with D. Imatorbhebhe deep along the sideline for a 50-yard TD.

– Browne hit Rogers over the middle for a gain of around 20 yards before Powell made the stop.

– Lockett and Marshall combined for the sack on Browne.

– Browne hit Deontay Burnett outside for a gain of 40-plus yards, but then Marshall put a big hit on Burnett, and Burnett fumbled. D. Imatorbhebhe made the recovery.

– Darnold tried to hit Isaac Whitney over the middle, but Ruffin broke up the pass.

– Darnold hit Steven Mitchell Jr. over the middle for a gain of over 20 yards.

– Darnold hit De’Quan Hampton over the middle for a gain of 10 yards.

– Darnold connected with Rogers over the middle for a gain of around 15 yards.

– Ware ran outside for a gain of 10 yards, leveling Langley along the way.

– Browne hit Whitney over the middle for a gain of 20 yards.