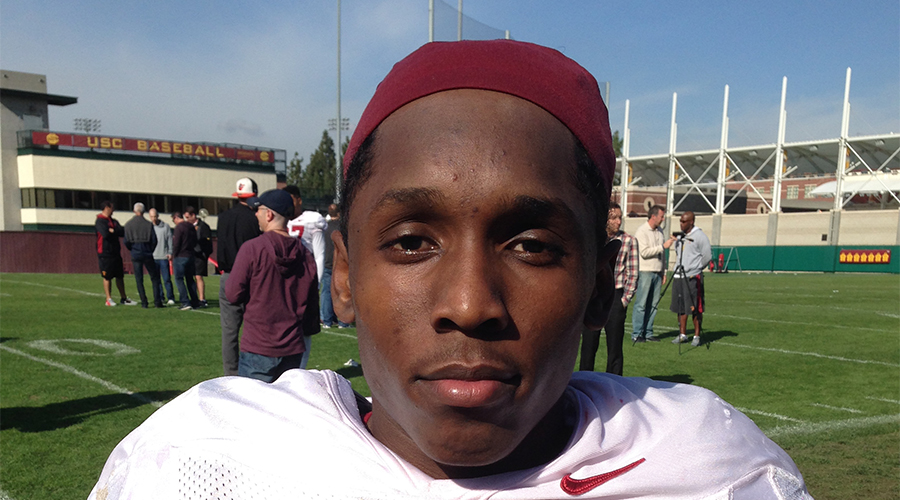 With a practice session coming up on Saturday in the Coliseum that Steve Sarkisian said will feature some scrimmaging components mixed in with a normal workout, the Trojans took part in a two-hour practice in shorts, shoulder pads and helmets on Thursday that, with temperatures soaring on Cromwell Field, had its ups as well as its downs according to the USC head coach.

One player not affected by any of the outside elements was Adoree’ Jackson, who following practice said that his list of goals includes winning the Thorpe Award as well as the Heisman Trophy. After shining at cornerback on Tuesday, the two-way star lined up at wide receiver on Thursday and, once again, had a fantastic showing. He had the play of the day when he made a fantastic juggling deep touchdown catch despite some physical coverage by Jonathan Lockett.

“I think he’s got really unique body control,” said Sarkisian in discussing Jackson’s skills as a pass catcher. “He has such good leaping ability that he can contort his body even mid-flight, which is unique. And then he has the athleticism and hand-eye coordination to make those types of catches – one-handed, juggling, things of that nature, so it’s almost becoming somewhat commonplace when we see him do it.”

The starting secondary had a different look on Thursday, with Chris Hawkins and Lockett splitting reps with the No. 1 unit at the safety spot next to John Plattenburg, while Leon McQuay III, normally with the ones, took most of his reps with the No. 2 defense.

Both Hawkins and Lockett fit the bill as versatile defensive backs with strong cover skills – something Sarksian said the Trojans are looking for with so many spread-it-out offenses on the schedule.

“When teams are putting four wide receivers on the field all game, you have to have your safeties be able to play man-to-man if you want to play man coverage, and play tighter in coverage,“ Sarkisian said. “That’s why we’re experimenting with some of our guys on our current roster at that position, and also that’s kind of the way we recruited. When you look at a Marvell Tell or Ykili Ross – those types of guys that could potentially do that – play in the slot, cover man-to-man, but also play a deep-third or a deep-half.”

With Jackson spending the day on offense, Hawkins and Lockett, in addition to alternating at safety with the No. 1 defense, also split reps at the cornerback spot opposite Kevon Seymour.

One day after taking part in Pro Day at USC, defensive lineman Leonard Williams, a projected top 5 pick in the upcoming NFL draft, was on hand at the Trojans’ practice session on Thursday. It was the second consecutive spring workout that he has attended.

With Williams now out of the equation at USC, defensive linemen Claude Pelon and Delvon Simmons are being looked upon to help replace the void created by his departure. And while Pelon had a standout practice session on Thursday, and Simmons has flashed at times this spring as well, Sarkisian said that both players need to perform at a high level on a more frequent basis.

“We need them to be really good players if we want to be the type of defense that we think we can be,” Sarkisian said. “It’s important for those guys to play really physical and to play disciplined. I think we’ve seen flashes of that from each of them. What we’re looking for the remainder of spring is that consistency. We don’t want them to necessarily flash, we want them to be really consistent, and so that’s what we’re pushing them to do.”

– Jordan Simmons spent the majority of the day with the No. 1 offense at left guard, while Damien Mama ran with the No. 2 group for the most part. Following practice Sarkisian said that they simply wanted to give Simmons more reps today because he missed Tuesday’s practice due to illness.

– After a strong showing on Tuesday, Quinton Powell took some limited reps with the No. 1 defense at SAM linebacker.

– Sarkisian said that there is still no update on tight end Bryce Dixon, who has missed the entirety of the spring so far due to a student-conduct issue.

– Freshman linebacker Cameron Smith had a solid day, making an interception on a Ricky Town pass, and also delivering a big hit on Aaron Minor on a pass over the middle from Max Browne.

– In addition to Williams, the list of those in attendance included former USC head coach John Robinson, incoming freshmen Tyler Petite, Caleb Wilson, Rasheem Green and Kevin Scott, as well as Class of 2016 running back Melquise Stovall and Class of 2017 running back Stephen Carr.

– Cody Kessler hit Steven Mitchell over the middle for a gain of 15 yards.

– Kessler went deep for JuJu Smith, but Seymour broke up the pass.

– Justin Davis run for a gain of close to 10 yards.

– Kessler hit Isaac Whitney along the sideline for close to 15 yards.

– Jalen Greene connected with Connor Spears, who held onto the ball for a gain of 10 yards despite a nice pop from Ryan Dillard.

– Greene threw outside, but Jones came up with the interception.

– Browne threw deep, and Jackson made a great, juggling grab for a 50-yard touchdown despite physical coverage from Lockett.

– Smith with a diving grab for close to 15 yards on a pass thrown by Kessler.

– Ricky Town connected with Jackson outside for a 10-yard gain.

– Town hit Mitchell for a 35-yard completion along the sideline.

– Town tried to connect with Whitney outside, but Jones came up with another pick.

– Town went back to Whitney, who hauled in a 30-yard pass from the freshman near the sideline.

– Browne hit Toland for a big gain along the sideline.

– Pelon batted down a Kessler pass at the line of scrimmage.

– Browne hit Mitchell over the middle for 15 yards before Matt Lopes made the stop.

– Kessler hit Rogers outside, but Cravens came up and stopped the play for no gain.

– Kessler connected with Darreus Rogers over the middle for close to 20 yards.

– Browne threw over the middle to Aaron Minor, who was drilled by Smith but held onto the ball.

– Davis weaved his way threw some defenders for a gain of 10 yards.

– Pelon stopped Vainuku for a loss.

– Town threw over the middle, and Smith made the interception.