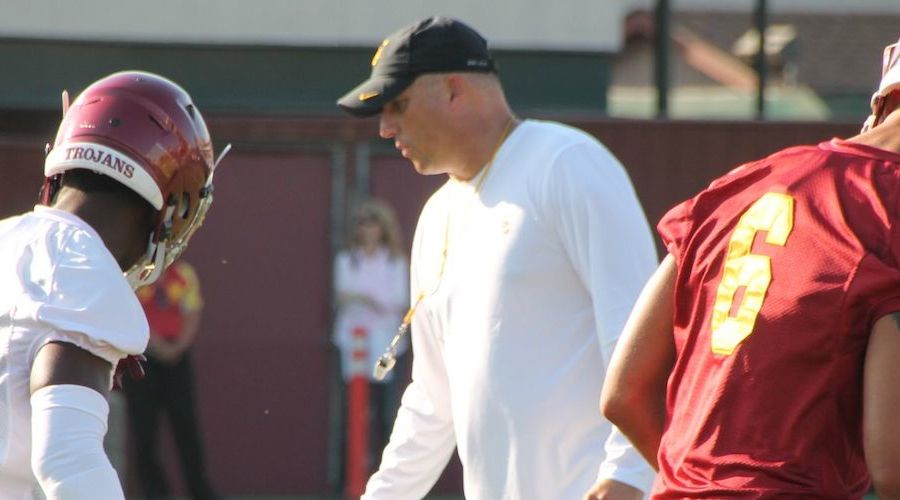 With a steady flow of rain pouring down, the Trojans took part in an extremely light practice session in helmets and shorts on Thursday that served as their last workout before the team was released for a four-day break for the holidays, with the players and coaches set to pick things back up on Dec. 27.

Held on Cromwell Field, the practice itself lasted for just over an hour, but the team still got some important Rose Bowl prep work in, and there was a special emphasis placed on the offensive red zone game plan – something that USC head coach Clay Helton believes could play a pivotal role in the outcome of the game given the ability of Penn State’s offense to score points.

“I think any time that you play a team that’s scoring 37 points a game, and is a no-huddle team, you better make the most of each and every opportunity that you get to put points on the board,” Helton said. “I just don’t think field goals will be good enough in this game.”

Adoree’ Jackson spent the early portion of practice on the training table after suffering a minor ankle injury on Wednesday.

He was suited up and eventually rejoined the team for the bulk of practice, but he was held out of all defensive and special teams drills. He did, however, take part in a late 11-on-11 period with the offense, and Helton said that the injury is not a reason for concern.

“Yesterday he had a little bit of a slip and got some ankle soreness, so we were really preventative with him,” Helton said. “Nothing big, just protecting him.”

– Helton said that freshman offensive tackle Nathan Smith was scheduled to undergo surgery on his torn ACL on Thursday.

– Khaliel Rodgers remained out due to concussion protocol.

– Florida natives Jamel Cook and Keyshawn “Pie” Young were allowed to travel home early for the holidays, so they were not in attendance.

“There was an earlier plane flight that got them home,” Helton said. “Those guys that are 3,000 miles away, and that can find a little bit cheaper flight, I allowed them to go.”

– Chris Brown continued to get work in at center, in addition to his normal guard spot.

– Jalen Greene again got reps at both quarterback and wide receiver.

– With Jackson sidelined, Jack Jones ran with the No. 1 defense at cornerback. Jones and Ajene Harris returned kickoffs in Jackson’s absence during a special teams period.

– Helton said that nothing has been finalized in regard to the players’ grades from the first semester, but that he should be able to report on whether or not there are any academic casualties by the 27th.

– The Trojans recently lost a pair of coaches from the support staff in Defensive Administrative Assistant Keynodo Hudson, who will coach the defensive backs at Florida Atlantic, as well as Special Teams/Offensive Administrative Assistant Scott Thompson, who will coach the tight ends at Fresno State. Helton discussed their departures following practice.

“I’m so happy for both guys to have the opportunities that are getting ready to come to them,” Helton said. “Guys that have been here for six, seven years and have really put in a lot of work to get to where we are right now. Not only are they our colleagues, but they’re our dear friends. I’m so proud when our guys that are quality control get the opportunity to put a full time coach in front of their name. What a great opportunity for them. That’s why you come to USC.”