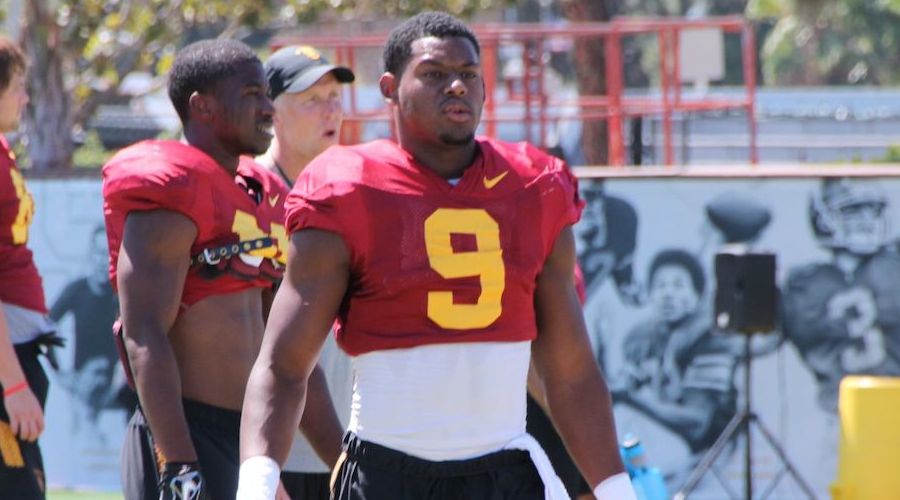 Coming off a practice on Saturday that wasn’t quite as crisp as USC head coach Steve Sarkisian would have liked, the Trojans came back out on Sunday and put together a much improved effort

With Washington coming up on Thursday, it was an energy-filled session marked by physical play, and it also got heated at times, particularly mid-way through the workout when a couple of skirmishes broke out between the starting offense and the scout team defense.

“It got a little feisty, which isn’t always a bad thing,” Sarkisian said. “It was really because the scout team was giving us such a great look, and that’s what makes you better as a football team.”

Things got especially intense following one play where service team defensive end Don Hill slammed tailback Aca’Cedric Ware to the ground, with the freshman ball carrier, as well as a number of other offensive players, taking exception to the hit.

A couple plays later, wide receiver JuJu Smith-Schuster calmed the situation by catching a short pass over the middle, setting the ball on the ground, and putting his fists up in a mock-fighting pose that had his teammates laughing.

“JuJu has got a lot of cool characteristics about him in that he’s got an infectious attitude, a contagious attitude, and he loves being out here practicing,” Sarkisian said. “He loves his teammates, and I think the guys respect his work ethic. And so, when they see him kind of able to have some fun with it, I think it makes everybody calm back down a little bit and focus on what we need to do.”

Taking part in his second consecutive workout after missing two practice sessions last week, Smith-Schuster had a very solid day, making a number of catches all over the field.

“I had some personal issues I had to take care of,” said Smith-Schuster when asked about his prior absences. “I took care of it and I’m glad to be back.”

Smith-Schuster was especially impressive during an early one-on-one period where he made deep catches against Iman Marshall and Adoree’ Jackson. He also had a highlight-reel 30-yard touchdown catch in a 7-on-7 period where he leapt up in the end zone to make the catch over Isaiah Langley.

Since returning from a rib injury that forced him to miss the Trojans’ opening game of the season, junior tailback Justin Davis has looked better and better in practice with just about every day that has passed, and he had a particularly strong performance on Sunday, highlighted by one run where he made a fantastic cutback move on his way to a gain of almost 20 yards.

Following practice Davis said that he thinks that he’s in the best shape of his career right now, and that he feels like he could be on the verge of a breakout performance. And with the Trojans having struggled at times to establish a rushing attack this season, that would be welcomed news.

“I feel like in any one of these games, I feel like I could have a good game,” said Davis, who has rushed for 144 yards and two touchdowns on 20 carries this season. “I’ve got the good o-line, I’ve got great backs around me, so it’s just a game away from us all breaking out.”

But with the Trojans set to face a Husky defense that is No. 1 in the Pac-12 against the run, Davis knows it won’t be easy.

“They’re going to be an aggressive, physical group, and we just need to match that physicality,” Davis said. “I love this practice that we had because we were very physical, and that’s the way we need to be going into the game.”

– Nose tackle Antwaun Woods (chest) participated in the entire practice session, going with the No. 1 group.

– Wide receiver Darreus Rogers (hamstring) did not participate in practice, although he did spend some time working with a trainer on the side of the field.

– Defensive tackle Jacob Daniel (hamstring) did not participate in practice.

– Center Khaliel Rodgers again was back in Delaware and did not participate in practice due to personal reasons, but Sarkisian said that he was expected back later on Sunday.

– Adoree’ Jackson spent time on both defense and offense on Sunday.

– During a late 11-on-11 period Isaac Whitney hauled in a pass along the sideline from Max Browne, and then stiff-armed freshman Marvell Tell to the ground on his way to a 35-yard touchdown.

– Rush end Jabari Ruffin made a juggling interception against the scout team during a service team period.

– J. Davis picked up five yards before Osa Masina made the stop.

– J. Davis made a really cutback and picked up close to 20 yards before John Plattenburg made the stop.

– Cody Kessler tried to hit Jalen Greene outside, but Jackson was there to break up the pass.

– Ruffin and Lamar Dawson combined to stop Dominic Davis for no gain.

– Browne hit Deontay Burnett outside for a gain of close to 25 yards.

– Kessler hit Smith-Schuster over the middle for a gain of 15 yards.

– Kessler hit Jackson outside for a gain of close to 10 yards.

– Kessler hit Greene over the middle for a gain of nine or 10 yards.

– Browne connected with Robby Kolanz over the middle for a gain of around 10 yards before Masina made the stop.

– Browne hit Jackson outside for a gain of 10 yards before Seymour made the stop.

– Kessler connected with Steven Mitchell Jr. over the middle for a gain of around 12 yards before Chris Hawkins made the stop.

– Jackson made a diving catch along the sideline for a gain of 10 yards.

– Cameron Smith put a big hit on Ronald Jones II after a short gain up the middle.

– Jones made a fantastic weaving run for a gain of around 15 yards.

– Browne hit Tyler Petite along the sideline, and he darted off for a 35-yard touchdown.

– Browne tried to hit Burnett over the middle, but Platennburg was there to make the stop.