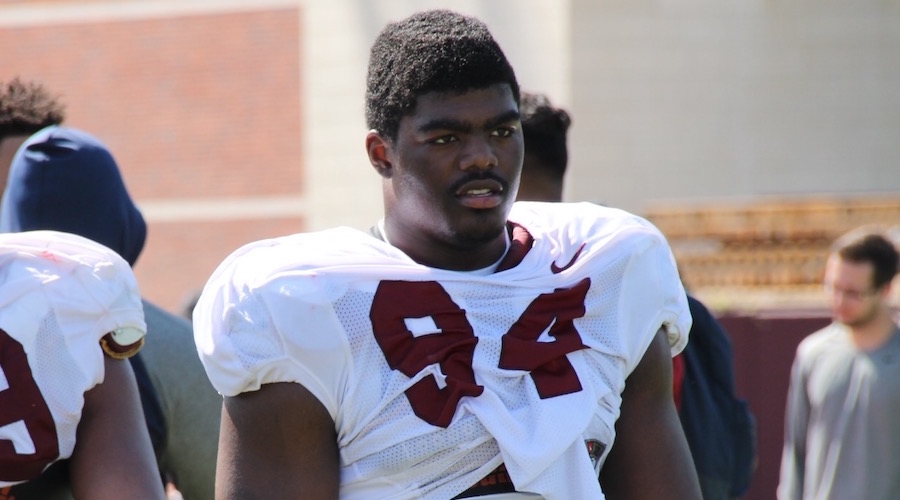 The Trojans were inside the Coliseum on Saturday for the first scrimmage of the spring, and afterwards, USC head coach Clay Helton was clearly in high spirits.

“I was waiting until today to see where we are, to play as clean as we did today really makes me a happy football coach,” Helton said. “I’m going to go buy a big steak tonight and throw it on the grill. We are further along than I thought we’d be.”

A full-pads workout that primarily pitted the No. 1 offense against the first-team defense, as well as the No. 2 groups against each other, the first thing that stood out was the team’s physical play, particularly on defense. Defensive lineman Rasheem Green and outside linebacker Jabari Ruffin emerged as the arguable stars of the day for Clancy Pendergast’s unit, with Ruffin making a statement early as he delivered a huge hit on Ajene Harris after the speedy receiver made a catch over the middle of the field.

“The first thing, I just loved the physicality of practice right from the get-go,” Helton said. “I thought the defense really set the tone early in the scrimmage. Jabari Ruffin, when he came in there full-speed and had the hardest hit of the day, it was really nice to see.”

The scrimmage was anything but one-sided, however, as there were plenty of strong performances put on by players on the offensive side of the ball as well. The USC running backs, in particular, stood out as Ronald Jones II scored on a pair of short touchdown runs, Aca’Cedric Ware came up with some nice gains, and Justin Davis put on a show, capping the scrimmage off with a weaving 25-yard touchdown run.

“I thought all three backs ran extremely hard and efficient,” Helton said. “You can see the experience of Justin Davis being a senior, and the running style that he had today. And then I really saw some maturity come out in Ronald Jones and Ced Ware going into their second season. I really liked where they were at.”

The competition for the starting quarterback job at USC rages on between Max Browne, Sam Darnold, Jalen Greene and Matt Fink, with Browne and Darnold standing out on Saturday.

It was Darnold who produced the only “explosive” passing play of the day – a 30-yard fade down the sideline to a wide-open Harris for a touchdown, and he also connected with Steven Mitchell for a 15-yard touchdown pass. Both quarterbacks were efficient, however, with Browne once again drawing praise from Helton for his poise in the pocket, before officially being declared the leader of the competition.

“Right now I would say Max is ahead, and that’s the way it should be,” Helton said. “You’ve got a guy coming into his fourth camp – just being honest. But I’m really, really positive about where the young kids are.”

Browne took the vast majority of the snaps with the No. 1 unit on Saturday, just as he has throughout the spring, although Darnold did spend at least one drive with the first group as well. Darnold also showed well moving in the pocket and scrambling at times.

Following the scrimmage Helton revealed that defensive lineman Kenny Bigelow has a torn ACL in his right knee, and that he faces a seven-to-nine month recovery timeframe. Bigelow went down on Thursday during practice, and he underwent an MRI that same night which revealed the extent of his injury.

“It’s very sad for him,” Helton said. “He continues to have a great frame of mind. He’s going to be a captain on this football team. He’s the rock for us, and now he goes to Coach Bigelow instead of Kenny.”

Bigelow tore his ACL in the same knee a month prior to the 2014 campaign, and he missed that entire season as a result. He had been lining up with the No. 1 defense throughout the spring at one of the interior defensive end spots.

Noah Jefferson, who can play nose tackle or defensive end, is currently sidelined with a back injury. A recent MRI and CT Scan each came back negative, so there is hope that he will return to action soon. Long Beach City College transfer Josh Fatu is also scheduled to arrive this summer, but in general, the Trojans don’t figure to have a ton of depth along the defensive line in 2016.

With USC set to face a number of teams featuring spread out offenses, however, Helton believes one way that the Trojans might be able to get around the issue is by going with their nickel defense – which utilizes just two interior defensive linemen – with greater frequency.

“Right now, the beauty of one thing – thank goodness Clancy is here – is the ability for our nickel package,” Helton said. “You look at who we play next year, and you look at ten of the 12 teams, you’re going to be in a lot of nickel, so that’s advantageous to us. We’ll be a little thin when you play an Alabama and Stanford.”

– Among those who did not participate in practice were JuJu Smith-Schuster (hamstring), Jefferson (back), Ykili Ross (shoulder), John Plattenburg and Clayton Johnston.

– Helton said that Smith-Schuster might return to action as soon as this Tuesday.

“I’ve held him off about as long as I probably can,” Helton said. “He’s itching, so I would imagine that he’ll be back in the first [practice] next week. I’m hoping.”

– Michael Pittman (clavicle) and Tyler Petite (concussion) were suited up, but withheld from contact drills. Osa Masina (hamstring) continued to work with a trainer on the side.

– Tight end Taylor McNamara went to the sideline mid-way through practice after re-injuring his shoulder, although Helton said he was held out as a preventative measure. The USC head coach said that McNamara has been dealing with a shoulder subluxation.

– Dominic Davis was not at practice due to a conflict with Track & Field.

– To start the day, the Trojans featured a No. 1 offensive group that had Browne at QB, J. Davis at RB, Darreus Rogers at WR, Steven Mitchell at WR, De’Quan Hampton at WR, Taylor McNamara at TE, Chad Wheeler at LT, Chris Brown at LG, Nico Falah at C, Jordan Simmons at RG and Zach Banner at RT.

– Banner, once again, also took reps with the No. 1 group at left tackle. In those instances Chuma Edoga came in and lined up at right tackle.

– When the team went to its nickel package, Jonathan Lockett came in and covered the slot, with one of the defensive linemen going to the sideline.

– Walk-on Reuben Peters, who has made the move from linebacker to fullback – or what Helton referred to as the F position – took some reps with the No. 1 offense on Saturday.

– During a field goal period Matt Boermeester went 7 for 7 on his attempts – all from 34 yards out.

– One more defensive player who had a strong showing was Predator linebacker Porter Gustin. He was a physical presence throughout the day, and opened the first 11-on-11 period with a big hit on J. Davis behind the line-of-scrimmage.

– Helton singled out SAM linebacker Uchenna Nwosu and cornerback Iman Marshall as defensive players who have stood out to him over the course of the first six practices of the spring.

– Former Trojans quarterback and Heisman Trophy winner Matt Leinart was among those in attendance.

– Browne tried to hit Hampton outside, but Marshall broke up the pass.

– J. Davis ran outside for a gain of close to 10 yards before Gustin made the stop.

– Davis ran outside and bowled over Marshall downfield before being stopped after a gain of 18 yards.

– Darnold hit Whitney outside for a gain of 10 yards before Kevin Carrasco made the stop.

– Jones ran for a gain of 5 yards before Tucker made the stop.

– J. Davis ran for a gain of 15 yards before Jonathan LaBonty made the stop.

– Green stopped Jones for a loss.

– Ware ran for 2 yards before Green made the stop.

– Darnold hit Harris over the middle before Ruffin leveled him.

– Darnold scrambled for a gain of 7 or 8 yards.

– Greene hit Daniel Imatorbhebhe for a gain of 8 yards before Olajuwon Tucker made the stop.

– Browne hit Hampton over the middle for a gain of close to 20 yards before Gustin and Co. made the stop.

– Davis ran outside for a gain of 9 yards before Hutchings made the stop.

– Jones followed a nice block by Banner off the right side for a six-yard TD.

– Greene hit Josh imatorbhebhe outside for a 10-yard gain.

– Tucker and Co. stopped Ware for no gain.

– Matt Fink hit Whitney over the middle for a gain of around 15 yards.

– Jones delivered a great stiff-arm to Nwosu at the line before breaking loose for a 13-yard gain.

– Jones ran behind Simmons for a gain of 8 yards before Tell made the stop.

– Nwosu stopped Jones for a loss.

– Ware ran for a gain of 8 yards up the middle before Nwosu made the stop.

– Darnold found Harris down the sideline for a 30-yard TD.

– Fink tried to hit Whitney outside, but Ruffin deflected it.

– Browne hit Darreus Rogers outside for a gain of close to 10 yards.

– Browne hit Hampton outside for 8 or 9 yards.

– Ware ran outside for a gain of 5 yards.

– Darnold hit Mitchell with a quick pass outside, and the veteran receiver darted up field and into the end zone for a 15-yard TD.