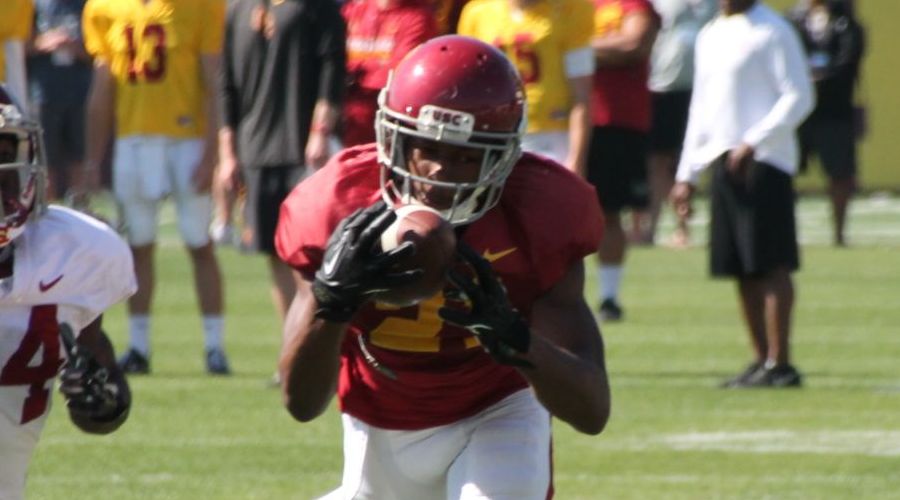 With somewhere in the neighborhood of 400 coaches in attendance for the USC/Nike Coaches Clinic being held on campus, the Trojans went through a full-pads practice session on Saturday that featured a heavy dose of 11-on-11 situational play, not to mention a pretty dramatic finish.

With his teammates having surrounded him in a semi-circle that also included a cheering Adoree’ Jackson, placekicker Michael Brown had the opportunity to end practice early if he could convert a 30-yard field goal attempt with a live rush – and that’s precisely what he did.

Brown, who made 4-of-4 field goals during that final period, wasn’t the only star of the two-hour session. USC head coach Clay Helton noted that Sam Darnold and the Trojans quarterbacks also caught his eye on Saturday, as well as the wide receiver corps – specifically Tyler Vaughns.

Part of a loaded group of young receivers, Vaughns has really started to come on over the last week, with Saturday’s session having served as his best showing yet. The redshirt-freshman caught a number of passes all over the field, including a beautiful diving 20-yard grab in the back of the end zone near the end of practice.

“When you look at the amount of talent that’s across the board, you know if you want to get on the field you better play to a certain expectation level where the bar is set, and the bar is set pretty high when you talk about Deontay [Burnett], Daniel [Imatorbhebhe] and now Velus [Jones] stepping up,” Helton said. “You want to make those types of plays, and you expect that from him. And today was by far, without question, his best day. He made tough catches – those one-on-one style catches that we’ve seen Darreus [Rogers] make, and JuJu [Smith-Schuster] make. And that’s what we need in this offense.”

Not surprisingly, Burnett also shined, just as he has throughout the spring. He was particularly impressive during an early 7-on-7 red zone period when he caught two consecutive touchdown passes – the second being a fantastic leaping grab over the middle.

Following practice Helton brought Burnett up in front of the coaches in attendance.

“I just used him for an example of what a Trojan should be,” Helton said. “He’s just a shut-up and work guy. He reminds me of a Robert Woods, and the Marqise Lees and the Nelson Agholors. He came out here to practice, and you can’t tell the difference between practice and a game with that kid.”

Darnold, meanwhile, had an outstanding practice as well. He made the arguable play-of-the-day during one 11-on-11 red zone period when he scrambled in the backfield before side-arming a pass to Cary Angeline for a big gain.

It was a play that was reminiscent of something that a certain NFL Hall of Fame quarterback might have come up with during his gridiron days.

“I’ve always thought he’s got a little bit of [Brett] Favre in him, to be honest with you,” Helton said.  “His creativity, his arm, his core strength to be able to make a throw like that, shuffling to your left and have that type of arm angle and throw. Not to say that Sam is at that level yet, but he has those types of attributes.”

– Following practice Helton revealed that early-entrant freshman linebacker Tayler Katoa suffered a torn ACL on Thursday, and that he will undergo surgery with a recovery time-table in the nine-month range.

– Clayton Johnston also saw some time with the No. 1 offense at left tackle.

– While Marlon Tuipulotu took some early reps with the No. 1 defense, Josh Fatu spent the bulk of the day there.

– Darnold hit Greene over the middle for a gain of 10 yards.

– Gustin and Co. swarmed Malepeai for no gain.

– Darnold’s pass was tipped at the line, but Pittman still made the grab for a gain of close to 10 yards.

– Darnold tried to hit Petite outside, but Tell broke up the pass.

– James Toland IV burst through the line for a big gain.

– Matt Fink connected with Vaughns along the sideline for a big gain.

– Darnold hit Petite over the middle for close to 10 yards.

– Tuipulotu stopped Darnold for no gain.

– Darnold hit Petite down the seam for a 25-yard TD.

– Sears hit Vaughns outside for a gain of close to 20 yards.

– Sears hit Vaughns over the middle for 10 yards.

– Josh Imatorbhebhe made a nice 25-yard touchdown catch in the corner of the end zone with Jalen Jones in coverage.

– Darnold hit Burnett over the middle for a 20-yard TD.

– Burnett made a diving 15-yard grab on a pass thrown by Darnold.

– Darnold’s pass over the middle was deflected and picked off by Matt Lopes.

– Darnold tried to hit Pittman in the corner of the end zone, but J. Jones broke it up.

– Green stuffed Malepeai for no gain.

– Houston and other stopped Malepeai after a short gain.
– Nwosu sacked Fink.

– Moore and Murphy stopped Toland for a loss.

– Sears hit J. Imatorbhebhe for a gain of around 10 yards.

– Sears hit Vaughns in the corner of the end zone for a 20-yard diving TD.