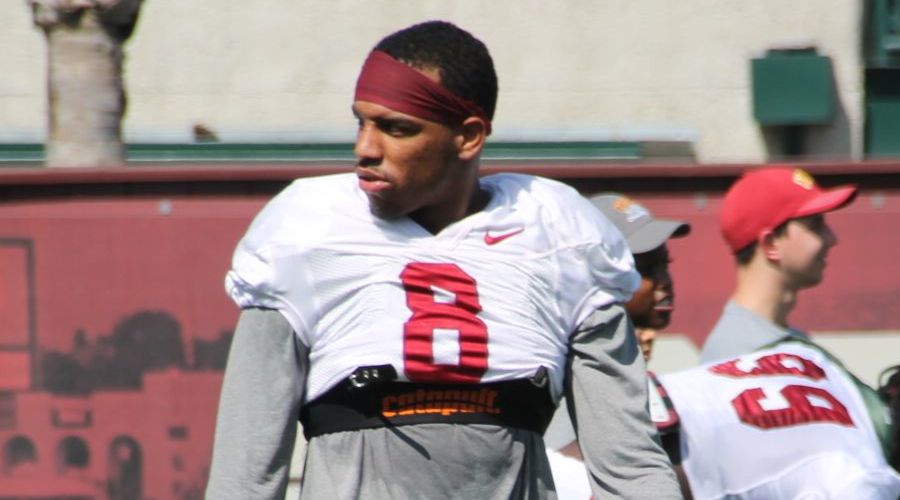 With a large contingent of recruits watching from the sideline, the Trojans were in full pads for the first time this spring on Saturday, taking part in practice session No. 3.

While there was no live scrimmaging or hitting drills, it was definitely a more physical practice than we’ve seen up to this point this spring, and the players seemed to feed off of the energy.

“Great to get back out here, get in full pads and bang around a little bit,” Helton said. “Great competition out there today. As you can tell these kids love to compete. It was right there on that fine line of exactly where you want it.”

Helton noted that there was a major point of emphasis placed on special teams work during the two-hour session, and in particular, in the punt return and kick return game.

“We’ve been so blessed for basically the past three years to have Adoree’ [Jackson],” Helton said. “Now we have to go find that next guy.”

Deontay Burnett, Jack Jones, Velus Jones and Michael Pittman Jr. were featured prominently in one punt return drill that took place mid-way through the workout, while others such as Ajene Harris and Isaiah Langley also took some reps.

Both Velus Jones and Pittman were also singled out by Helton following practice for the way that they performed at receiver on Saturday despite the fact that they are both battling minor injuries. Jones, in particular, has really turned some heads this week. Having redshirted this past season, he even took some reps with the No. 1 offense on Saturday.

“You can feel the speed, and he has a mental toughness that I really appreciate,” Helton said. “Him and Mike Pittman really showed me something today because both aren’t all the way healthy, and they really stepped up. And that’s what I love about these kids. They want to compete so much, they don’t want to be out.”

The team will now get a week off for spring break before resuming with spring drills on Tuesday, March 21.

– Jalen Greene (hamstring) and Rasheem Green (toe) were both pulled from practice due to injury, but neither is thought to be significant, and Helton said that he believes that both players will return to action following spring break.

– In nickel situations Ajene Harris came in to cover the slot, with Rector heading to the sideline.

– Placekicker Michael Brown went 7-for-10 during a field goal period, with a long of 48 yards.

– Marshall came up with the arguable play of the day, stepping in front of a quick Darnold pass over the middle before taking it back for a pick-six.

– Just one play later it looked like Darnold tried to throw a pass away, but it bounced off a blitzing Marvell Tell into the air before Nwosu picked it off and took it back for a touchdown. It was an unusual pair of back-to-back plays to see from Darnold to say the least.

– During an earlier 7-on-7 period Tyler Petite came up with a great reaching one-handed catch over the middle on a pass thrown by Matt Fink.

– Following practice Helton praised freshman defensive tackle Marlon Tuipulotu for the way that he performed through the first week of spring ball. The early-entrant has impressed while lining up with the No. 2 defense at the nose position. The Trojans head coach gave much of the credit to the way that he dedicated himself to the strength and conditioning program upon his arrival at USC in January.

“He’s just done a great job of preparing and studying, and it’s paying off out here,” Helton said. “He doesn’t look like a freshman. He’s a guy that is definitely going to be in the mix for competition going into fall camp if he continues on this pace. There’s no doubt in my mind.”

– Helton said that cornerbacks Jack Jones and Keyshawn “Pie” Young will see some time on offense this spring – Young likely following the break, and Jones beginning in Week 3 of drills.

– Green and Co. stopped Ronald Jones II for no gain.

– Darnold hit Burnett over the middle for close to 10 yards.

– Marshall came up with the pick-six on a pass from Darnold.

– Nwosu intercepted the deflected Darnold pass and returned it for six.

– Fink hit Burnett over the middle for 7 or 8 yards.

– Malik Dorton pressured Fink who scrambled for a short gain.

– Cameron Smith and others stopped R. Jones for no gain.

– Darnold hit Burnett outside for a gain of 6 or 7 yards.

– Darnold hit Tyler Vaughns outside for a gain of 10 yards.

– Darnold hit Cary Angeline over the middle for 10 yards.

– Fink hit V. Jones outside for a gain of close to 10 yards.

– Fink hit Malepeai outside for a gain of around 10 yards.