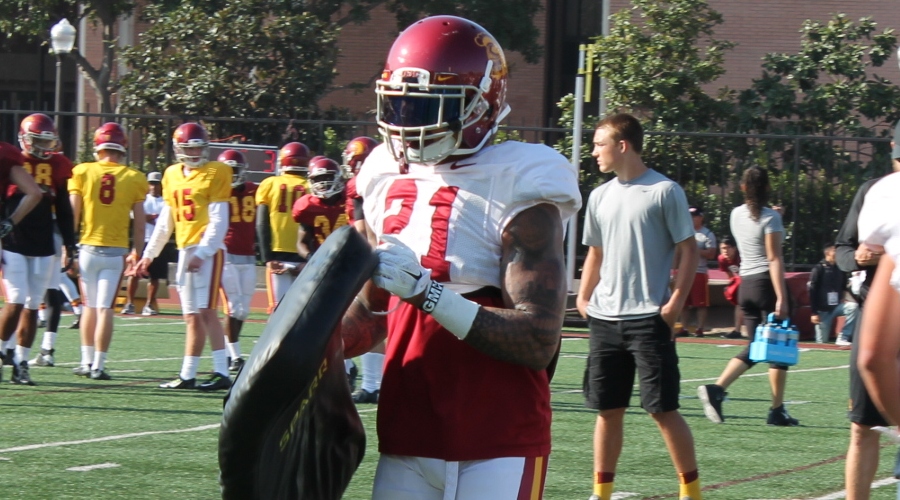 The Trojans practice practiced in full pads inside the Coliseum on Saturday, with the team spending much of the day going through different situational scenarios during the 11-on-11 and 7-on-7 periods.

The defense set the tone early, dominating an early goal line period, and Justin Wilcox’s group finished practice of in just as impressive fashion, sweeping the offense in the team’s final five-play challenge with Matt Lopes’ sack on Cody Kessler putting the exclamation point on the session.

Playing aggressive, physical and fast to the ball, it was the latest in a string of solid showings by the defense this spring.

“We think we’re going to be really good on defense,” said USC head coach Steve Sarkisian following the two-hour practice. “We want to be more aggressive. We want to be able to pressure the quarterback more. We want to be able to make it uncomfortable on quarterbacks. To do that you have to cover really well, and our youthfulness from a year ago became invaluable experience that is helping us right now. John Plattenburg, Adoree’ [Jackson], Kevon [Seymour], Leon [McQuay], all of those guys, the reps they got and some growing pains that we had to endure a year ago are making us a better defense today, which is allowing us to do more up front.”

No one has made a bigger statement with his play this spring than Su’a Cravens, and that trend continued on Saturday. The junior SAM linebacker was a disruptive force throughout the day, particularly during an early 11-on-11 period when he opened up the session by dropping Justin Davis for a loss in the backfield, before later coming off the edge to knock a Cody Kessler pass attempt down.

“He’s had a great spring,” Sarkisian said of Cravens. “He’s just been so disruptive at the line of scrimmage. He’s got a unique ability to rush the passer, and he’s always around the ball. What I appreciate about Su’a, which I think he’s really excelled and changed his game, is his effort on every play. The guy is just playing with amazing effort right now.”

While it was the defense’s day for the most part, the offense still managed to shine at times as well, with quarterbacks Cody Kessler and Max Browne completing a number of long passes. Browne, in particular, was able to capitalize on the opportunities he had to throw deep, completing an 80-yard touchdown pass to Isaac Whitney, and he also connected with Steven Mitchell on a 40-yard play.

“We are an offense, where obviously, we pride ourselves on our efficiency, and our ability to play catch, and to get completions within the 10-15 yard range, but if we don’t throw it downfield people are going to keep squeezing us and squeezing us, so we have to throw the ball down the field to make people honest,” Sarkisian said. “I thought today, later in practice, we did a good job of throwing it down the field. Max made a couple nice throws. Cody did too.”

– Defensive lineman Claude Pelon suffered a shoulder injury mid-way through practice. He was spotted at the trainers’ table afterwards with his left arm in a sling and ice on his shoulder.

“He tweaked his shoulder,” Sarkisian said. “I don’t know anything more.”

When Pelon went to the sideline, Malik Dorton took his spot with the first-team defense at one of the interior defensive end spots.

– With Khaliel Rodgers (shoulder) still sidelined, Toa Lobendahn continued to spend the bulk of his time with the No. 2 offense at center, although he did take some reps at his normal left tackle spot with the No. 1 offense late in the day. Nico Falah took a majority of the reps with the first-team offense at left tackle throughout the rest of the practice session.

– There was an early Oklahoma gauntlet-style drill that featured some big hits and physical play. Some of the highlights included Darreus Rogers pancaking Matt Lopes to spring the ball carrier free, Quinton Powell beating Soma Vainuku to make the tackle, Jahleel Pinner driving Lamar Dawson back, and Dorton blowing by Chuma Edoga to make the tackle.

– JuJu Smith made a beautiful leaping 25-yard grab over Jalen Jones near the goal line, but he also dropped a pass in the end zone a little later.

– The two starting safeties for much of the day were Chris Hawkins and Plattenburg. Olajuwon Tucker continued to run with the first-team defense at will linebacker.

– During a late field goal period Matt Boermeester went 2-for-3, while Alex Wood went 3-for-4.

– There were a large number of recruits in attendance, including incoming Trojans players Jacob Daniel, De’Quan Hampton, John Houston, Christian Rector, Marvell Tell and Caleb Wilson, Class of 2016 quarterback Patrick O’Brien and cornerback/wide receiver Jackie Jones, Class of 2017 defensive tackle Jay Tufele and defensive end Langi Tuifua – both from South Jordan (Utah) Bingham – as well as Mat Boesen, a defensive end who was dismissed from Boise State’s team this past December for a violation of team rules. Also on hand were plenty of high school coaches who are on campus for the USC Coaches Clinic.

– Cravens got in the backfield in a hurry and stopped Davis for a loss.

– Vainuku had a tough run up the middle for a gain of around seven yards.

– Darreus Rogers made a nice leaping 20-yard catch over the middle on a pass from Kessler.

– Cravens knocked a Kessler pass away in the backfield.

– Kessler connected with Connor Spears outside for a gain of close to 10 yards.

– Browne hit Ajene Harris for a six or seven yard gain before Cameron Smith leveled him.

– Quinton Powell deflected a pass thrown by Browne in the backfield.

– Browne connected with Isaac Whitney for a 30-yard gain with Jonathan Lockett in coverage.

– Kessler threw outside to Pinner for a short touchdown.

– Davis muscled his way into the end zone for a one-yard touchdown.

– Cravens stopped Pinner for no gain.

– Kessler threw outside to Mitchell, but Lockett stopped him for no gain.

– Dorton stopped Vainuku for a loss.

– At the goal line, Browne couldn’t handle the snap and Quinton Powell recovered it.

– Smith dropped Vainuku for a loss.

– Kessler hit Christian Tober for a 20-yard touchdown over the middle.

– Kessler found Whitney at the pylon for a 15-yard touchdown.

– Browne hit Harris for a 20-yard touchdown over the middle.

– Jalen Greene fired over the middle but Smith broke the pass up.

– Greene threw again over the middle, and this time McQuay picked it off.

– Towne threw a pass over the middle to Tober, but Davonte Nunnery intercepted it.

– JuJu Smith made a great 25-yard leaping grab over Jones on a pass thrown by Browne.

– Town threw a nice pass to George Katrib in the corner of the end zone for 20-yard touchdown pass.

– Davis broke a Tucker tackle attempt and gained 10 yards before Hawkins stopped him.

– Dorton stopped Davis for no gain.

– Browne lofted a pass 40-yard downfield and Steven Mitchell came down with it.

– Kessler tried to hit Rogers outside but Jackson broke up the pass.

– Kessler hit Smith outside with a quick pass, but Delvon Simmons got there in a hurry and dropped him.